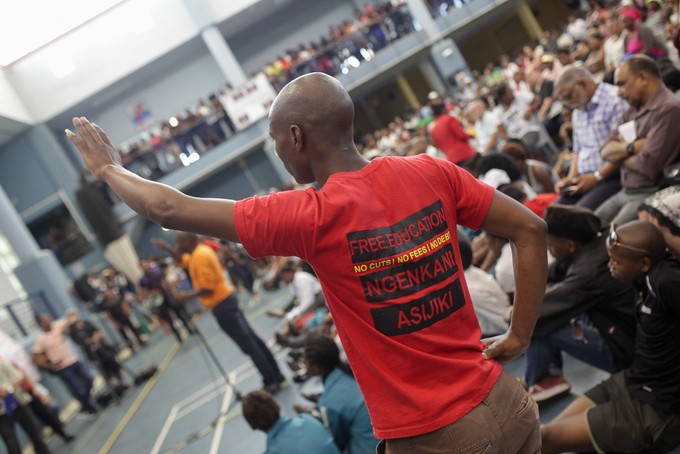 Cape Peninsula University of Technology (CPUT) students demanded immediate insourcing and the return of arrested student activists to campus at a general assembly of the staff and student body on Thursday. It took place on the institution’s Cape Town campus.

Lorenzo Davids, the mediator of the general assembly, read a list of 24 agenda items he said stakeholders had previously agreed to discuss at the meeting, including free, quality, decolonised higher education, fee increases, violence toward students and the extension of the academic year, among other topics.

The assembly was delayed for hours due to demands that arrested students be present. But because the students’ bail conditions would mean their immediate arrest upon returning to campus, university officials instead committed to sending university lawyers to represent the students before the magistrate.

When the assembly did commence, students focused on the issue of insourcing and urged the university to commit to a date when full insourcing would begin.

CPUT Vice Chancellor Prins Nevhutalu said insourcing was the government’s duty and responsibility, not the responsibility of university management.

After several hours at the meeting GroundUp reporters had to leave for another engagement. The meeting was still on the first agenda item.