Hundreds stranded by roadside after massive farm eviction in Kraaifontein

Evictees say all their possessions were seized 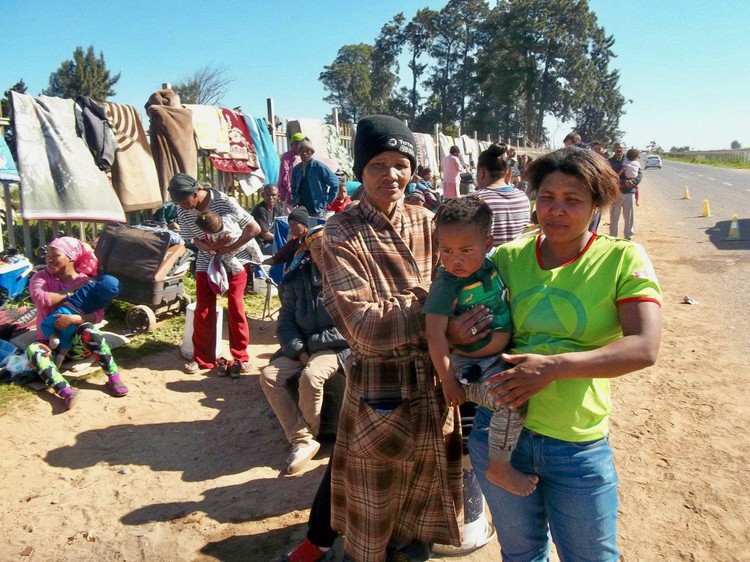 Rachel Swanepoel and Charmane Lewis (with her baby) are among hundreds evicted from Klein Akker Farm in Kraaifontein. Photo: Vincent Lali

Hundreds of people including dozens of children have been dumped beside the Botfontein Road after they were evicted from Klein Akker Farm in Kraaifontein on Monday.

Gerard Konrad of Klein Akker said: “I own the land. I’m a taxpayer. I paid for the land … I have asked them to stay beside the road where the City of Cape Town will be responsible for them.”

Ward councillor Simphiwe Nonkeyizana said the evicted farm dwellers had come individually from Gouda near Worcester and other places to work as guava and grape pickers, some about 25 years ago.

The current owner bought the farm in 2012, and started to focus on sand mining and a transport business, said Nonkeyizana.

“When the new farm owner stopped growing fruit, the farm hands started to work in nearby farms and elsewhere,” he said.

Their homes were demolished by law enforcement and security guards on Monday.

“They came and emptied our house [a shack] by force. I cried and one official said he was sorry,” said Loretta Hermanus, who is studying for a BCom at the University of the Western Cape. “We were like a family here. The farm was a home to all of us,” she said. “We all met at one shop, where everybody bought food, knew each other, and were all close to each other.”

Frandolene Reid, a mother of five, who says she lived on the farm for 19 years, said officials seized her belongings and placed them in a storeroom at a nearby farm which they have prevented her from accessing.

“I can’t even change the clothes I’m wearing, because the officials seized all my clothes,” she said. Her children’s school uniforms were also seized. “We now want the City to give us houses with electricity, water and toilets.”

Rachel Swanepoel said the shack where she lived for 13 years was demolished by an excavating machine.

“Because we had no blankets to protect ourselves from the cold, I and other residents made fire to keep ourselves warm. Our blankets are in the storage,” she said.

She works as a domestic worker in North Pine. She said she has no money to buy new building materials and besides she has nowhere to go.

Angelique Swanepoel, who said she had lived on the farm for nearly two decades, said all her food and pots had been seized and her children went to sleep on empty stomachs on Monday night.

Councillor Malusi Booi, Maycor Member for Human Settlements, said: “The private owner acted in respect of an eviction order that was granted and approved by the court during October 2017 but the respondents applied for a stay of the eviction which was granted until 1 July 2019.”

He said: “The City offered alternative accommodation on two separate occasions which were refused by the respondents.”

Community leader Peter Hermanus said the City of Cape Town had offered the farm shack dwellers land near Philippi police station two months ago. “We could not move onto the land because it is flooded. Besides, the area is unsafe as it is infested with gangs,” he said.

Community leader Shaun Macdonald said: “We are trying to get food for them. We want the City to give them land where they can put up shelter.”

In a statement, Wendy Pekeur of the Ubuntu Rural Womxn and Youth Movement said a case of unlawful eviction and Constitutional damages will be put before the Cape High Court at 2pm on Wednesday.

“The right to have access to adequate alternative accommodation has also been overlooked. Many of the learners cannot go to school as their uniforms and books are also tucked away in the storage rooms. The Principle of Bernadino Heights Secondary school has just lodged a case with the police station as some learners of the school had been affected.”

Pekeur said: “Even when people reside on private-owned land and an application for eviction is done, the municipality gets notice and gives the go-ahead … They now want to relocate the families to Philippi while they have land next to the farm.”