“Day zero an invention of the City” says a protest leader 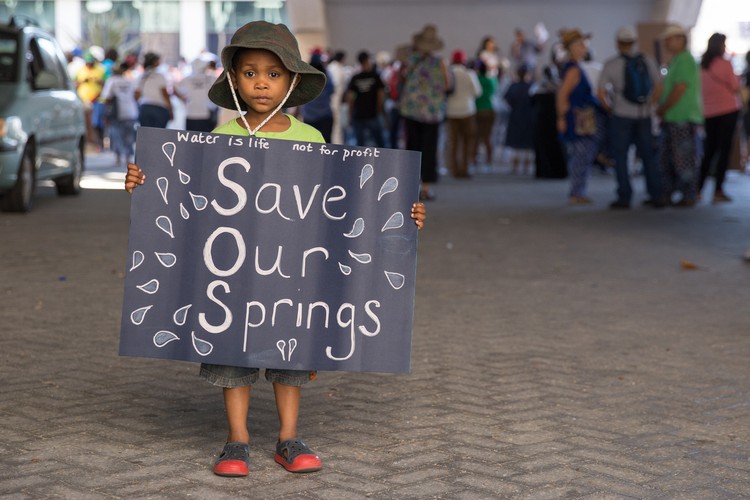 Hundreds of people joined outside the civic centre to protest against the City of Cape Town’s management of the water crisis. The Cape Town Water Crisis Coalition (CTWCC) is calling for government to remove water management devices, to stop any drought levy or water tariff increase plans and no privatisation of water supply.

Shaheed Mahomed of the CTWCC said that although the crisis is real, “Day Zero is an invention of the City”. He claimed that the City is trying to instil fear in order to privatise water for profit. “They want to bring in desalination. They want to bring in those water management devices so that they can effectively exercise control of the lives of the people,” he said. “You can come up with the most beautiful plan, but if the City is under mismanagement, it’s a problem.”

The Mayco Member responsible for water, Xanthea Limberg, came to the protest to receive the memorandum. But members of the CTWCC refused to hand it over to her, demanding that the mayor come instead.

At one point, people started to chant: “Water for all, the mayor must fall.”

Bo-Kaap resident Deborah Gericke said the water crisis is being handled badly by the City. Gericke’s biggest fear is that water will be “privatised”. She said farmers and business should also be cutting back. “It’s not just down to everybody on 50 litres per day. It does seem to be that the burden is being placed on us rather than businesses or agriculture.”

Nazeer Sonday, a farmer and member of the Philippi Horticultural Area Food and Farming Campaign, said that water belongs to everybody “Water is life. Water is a social good and water must be shared equally with everybody.” He said that there is the Cape Flats aquifer under our feet. “There is no water crisis; there is a management crisis.”

“Day Zero”, the day when the taps will be switched off is currently set for 12 April. On this day water will be cut to most parts of the city, and residents will need to collect water at designated points.

Read the City’s answers to questions about the drought.