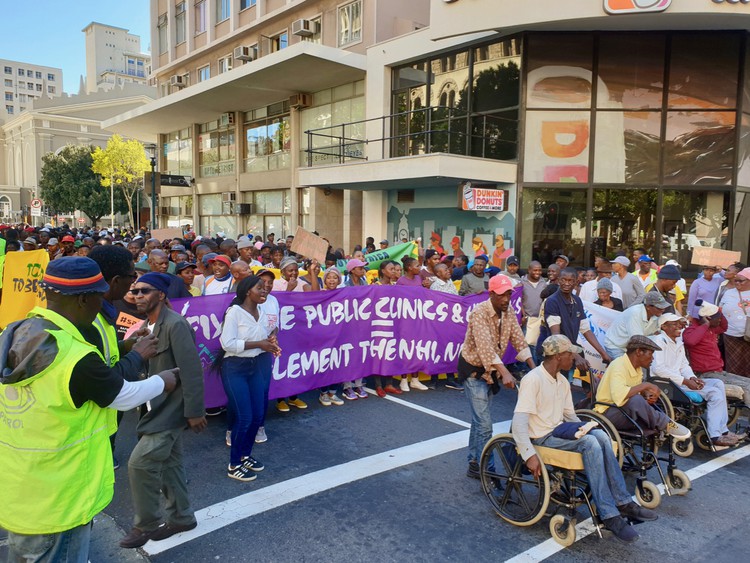 Hundreds of people marched through Cape Town to Parliament on Wednesday to demand that government implement the National Health Insurance (NHI) system.

The marchers came from Gugulethu and Khayelitsha. Organisations that took part included Sonke Gender Justice and — march organisers — Movement for Change and Social Justice (MCSJ) and the People’s Health Movement South Africa. They sang and danced holding banners and placards.

MCSJ founder Mandla Majola, described the NHI as the “first step to better our public healthcare system”. He said the NHI was a fund that would ensure the implementation of proper healthcare for all and would bridge the gap between private and public sectors.

“Health is like airtime or electricity or water, you have to buy it, but it is too expensive. So we are forced to go to public health facilities where you sit for hours in pain, waiting to be attended to only to be given Panado. How many of us have lost people because of botched surgeries and operations in public hospitals because the staff do not care?” asked Majola.

Before the march, the MCSJ identified ten private hospitals and sent a small group of people to each hospital to picket outside to try and get help for one member in each group who was struggling to get help at a public clinic.

GroundUp followed a group of about 20 people who went to the Rondebosch Medical Centre (RMC). The picketers held up a big yellow banner saying: “Too poor to be treated”.

Ndumiso Mzazi of the MCSJ, who was leading this picket, took two people from Gugulethu inside, one with TB and the other with a swollen knee.

“We told them [RMC] that we have no money and we had not received any help at the KTC Day Hospital. The man who spoke to us said if it was an emergency then they would attend to the patients, but would then refer them back to a public facility,” said Mzazi.

Majola said: “We accompanied these people to these private hospitals because they have not received proper healthcare services in the township. We wanted help but we had no medical aid, but we have the right to healthcare.”

In a memorandum, addressed to Minister of Health Aaron Motsoaledi, the MCSJ highlights structural problems in public clinics and hospitals, such as overcrowding and bed shortages; understaffing and maladministration, such as the disappearance of patient folders and staff shortages; the rural and urban divide, such as the long commutes to and from facilities; and the disparities between private and public sectors, such as drug shortages and long queues.

They are demanding that NHI be implemented rapidly and adequately; that national government widen the awareness of NHI through initiatives like road shows and campaigns and that there be transparency in the NHI process.

The memorandum was received by Victor Khanyile, a director in the national health department, on behalf of Motsoaledi.

“All these things written in the memorandum are important and need to be prioritised, without a waste of time. The minister is currently visiting different provinces and meeting MECs, HODs and senior managers in the public health sector. He is ensuring that all provinces are on board in terms of the implementation of the National Health Insurance. I am going to make sure that the minister receives this memorandum,” said Khanyile.

CORRECTION: The TAC contacted GroundUp to ask that it’s name be removed from the article as one of the organisers of the march. We were informed that TAC members who marched did so in their personal capacities and that the TAC does not support NHI, but instead wants government to fix the public health system.