Protesters express solidarity with women’s marches in the United States 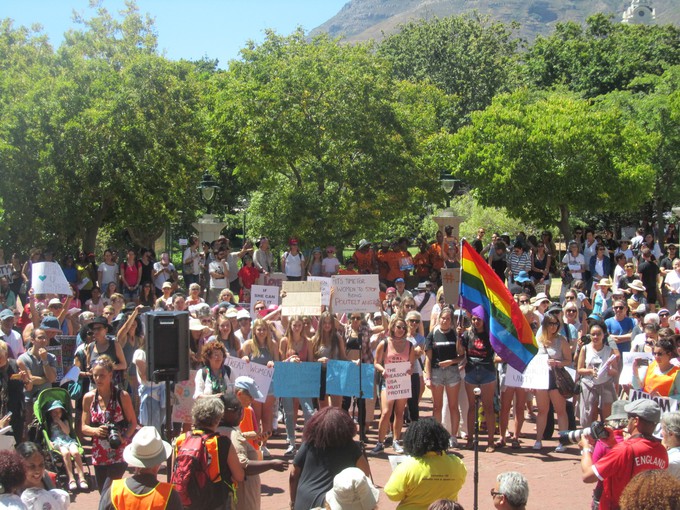 Hundreds of people, mostly women, gathered at the South African Museum in Cape Town on Saturday. They marched through the Company’s Garden to the front entrance to Parliament holding placards with signs like “A woman’s place is in the revolution”,”Well-behaved women seldom make history” and “It’s time for women to stop being politely angry”.

The march was in solidarity with women’s marches taking place in the United States and elsewhere around the world to show opposition to US president Donald Trump who was inaugurated yesterday.

“The march is in solidarity with what is happening today in the United States but this is a warning shot to our government. The way women are treated by our government is the same way we believe President Trump’s administration would do,” said Myrtle Witbooi of the South African Domestic Service and Allied Workers Union, addressing the media.

A pamphlet by the protesters expressed concerns that the Trump administration might threaten decades of international gains in human rights. The protesters demanded that President Trump:

The pamphlet said that all women must have access to the highest possible attainable standard of health including sexual and reproductive health.

Dean Peacock, Executive Director of Sonke Gender Justice, said Trump’s administration should be taken head on from the start. “It is important to resist Trump’s conservative policies from day one and to make it clear across the world that his policies are discriminatory,” he said.

Ethan Parsons, from America, said “I have never felt so ashamed of my country as now. I don’t think Trump represents American values of truth, justice and peace.”