“We have no food” 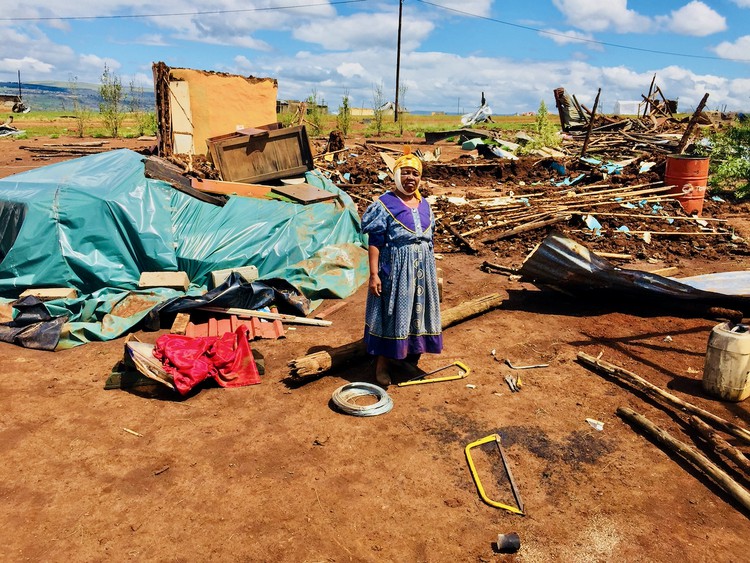 Velephi Mncube sustained a head injury and her mud house collapsed in the tornado that hit Pietermartizburg last week. She says she has no food. Photo: Nompendulo Ngubane

Hundreds of residents in Mpolweni outside Pietermaritzburg are struggling to put their lives back together in the aftermath of last week’s tornado.

Over 200 homes were destroyed or damaged leaving hundreds of residents roofless in Thokozani, Lindokuhle Village and Mvundlo.

Two people lost their lives — a man in Mpolweni and a woman in Thokoza — and at least 18 were injured, according to uMshwathi local municipality manager Nhlanhla Mabaso.

He said various companies and humanitarian organisations were helping.

“Our officials are on the alert since the weather has not cleared up,” he said on Friday.

In Lindokuhle Village, the mud house of Velephi Mncube, 67, and her 77-year-old husband, who is in a wheelchair, collapsed on them.

“The clouds became dark … The house started moving. I remember screaming and telling my husband to watch out … There was heavy wind and rain. Something out of nowhere hit me in the face. The house fell on us. My husband was under pieces of the wall,” said Mncube.

“I shouted for help. A neighbour came to rescue us. There was a lot of blood coming from the wound on my face. I don’t know what hit me. I suspect it was the corrugated iron that was flying. I had a big cut on my face. They had to take me to hospital immediately,” said Velephi.

In Mpolweni residents were trying to rebuild their homes. Some were searching the veld for corrugated sheeting.

The municipality has provided tents, but, says Lindiwe Hlophe, people need blankets. She is sleeping with her husband in a car. “Our children use the tent … We share blankets with neighbours …We have no food. There are no toilets … We have no choice … We lost everything.”

Some residents have found refuge at a church, which was also damaged in the storm. Businesses are assisting with food at the church, but not all residents can access it.

“If they can have a way to reach the homes of the elderly who have difficulty walking to the church … We are hungry and homeless,” said Nelisiwe Shange.