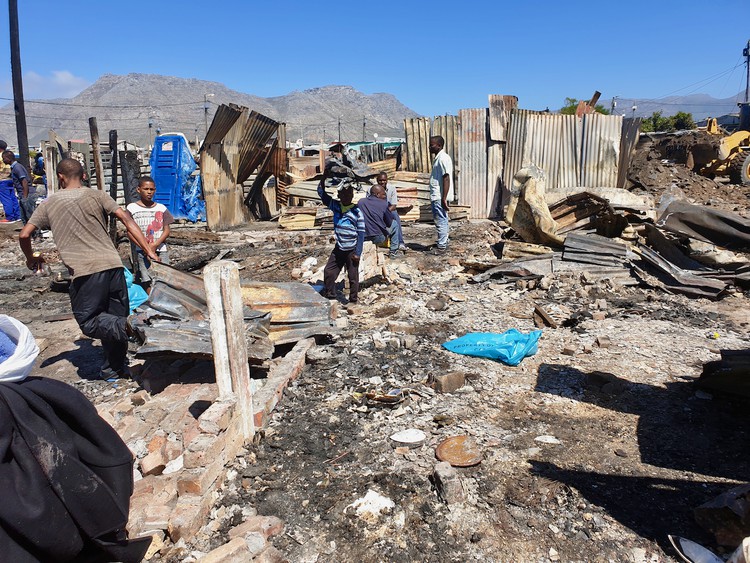 Shireen Loff was watching popular soapie Generations on her TV around 8pm on Monday night when she heard screams outside. Minutes later, Loff and her family had to flee their shack as it was engulfed by flames.

Loff lost everything in the fire, including her ID book, her children’s school books and school uniforms. “We have been living here for eight years, and we have never experienced something like this,” she said.

In a statement the City Fire and Rescue said it had responded with nine fire engines, five water tankers and a rescue vehicle. “No injuries were reported. The blaze was extinguished just after 1am this morning and the cause of fire [is] unknown,” the statement said.

On Tuesday morning, the stench of the fire lingered in the air. Some residents sat and watched as what was left of their former homes was taken away; others salvaged what materials they could to build again.

Jasmyn Botha, her feet covered in ash, carried her four-year-old son, Jayden. “We lost everything – clothes, all our belongings and food. We are hungry because the last time we ate was last night before the fire. We have received nothing to eat yet. We are waiting for the people from SASSA (South Africa Social Security Agency),” said Botha.

“It was pure luck, but I managed to save Jayden’s clinic card before it was taken by the fire,” said Botha. Jayden has a disability and an upcoming appointment at Red Cross Children’s Hospital.

Community activist William Lewis said he had been assured on the phone by people from SASSA that food would be brought for the fire victims.

“That fire spread so quickly, the fire brigade was working like hell to put it out,” said Lewis.