Hundreds of learners’ schooling affected by a bad bridge 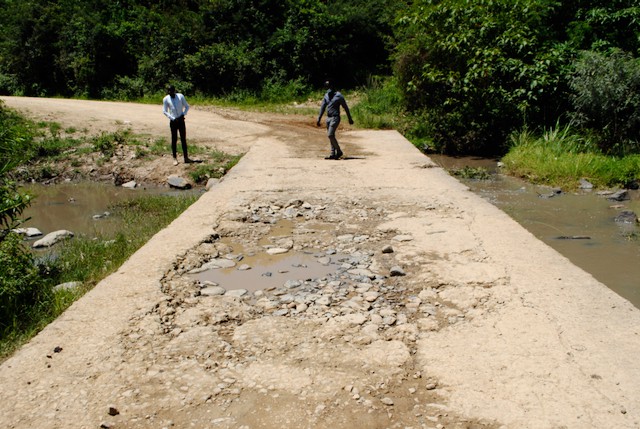 Villagers in Lwandile, about 80km from Mthatha, say lack of maintenance of their roads is causing great hardship. The roads are badly potholed, encroached by bush on both sides, and a crucial low-lying bridge over a river is damaged, has no guard rails, and is impassable when it floods.

Learners struggle to get to school and cars get stuck in the mud. A 43km journey from Ngqeleni town to Lwandile village takes two hours.

The village has over 4,000 households and falls under the Nyandeni Local Municipality.

“Everything comes to a standstill for two to three days depending on how big is the rain,” says Maliviwe Dayi, a member of staff and former learner at Lwandile Junior Secondary School.

“Since I was a learner, Ludaka Bridge in Ngojini village has not been maintained. The bridge gets easily flooded. Learners from both Lwandile and Mtakatye Junior secondary schools use that bridge … Workers and community members who want to go to town and the clinic also get trapped on that side of the village because there is no alternative route.”

“Since 2004 we have been reporting this problem to the municipality,” said Dayi.

On Friday Ncebakazi Kolwane, municipal spokesperson, said, “The community does not report these problems to our maintenance department. They are only quick to jump to you, the media, and report them.”

“The road and the bridge had been assessed after the December floods by our disaster management team. We are still waiting for funding from the district [OR Tambo District] municipality to fix them. But we don’t know how much will be allocated for us and when that would happen. If we don’t get the funding we will have to make other plans … In our records nobody ever reported this case.”

Lubawo Mbalekwa, deputy principal at Lwandile Junior Secondary School, said, “We have 620 learners from grade R to 9. But on wet days 50% of our learners get affected. If it starts to rain while the learners are at school we release all those learners who use that bridge to quickly go home before the river gets full.”

“Our main road is also in bad condition. Some of our teachers are unable to come to school because the road becomes muddy. Then we are forced to stop our lessons and only do revision with the available learners.”

Akhona Gogothe, a Quqa [bakkie transport] driver said, “For four years I have been transporting people on this terrible road … The bakkie I am driving is almost finished although it was bought in July last year.”

“The bolts, front suspension and tyres are quickly worn out. Instead of making a profit, our business is running at loss. Almost every month I spend R600 on bolt joints. For two or three days we cannot cross Ludaka Bridge when the river is full. This means we lose working days.”

“Our municipality comes and pretends to be maintaining our roads only when the officials are campaigning for our votes … After we voted for them we never see them again,” said Gogothe.