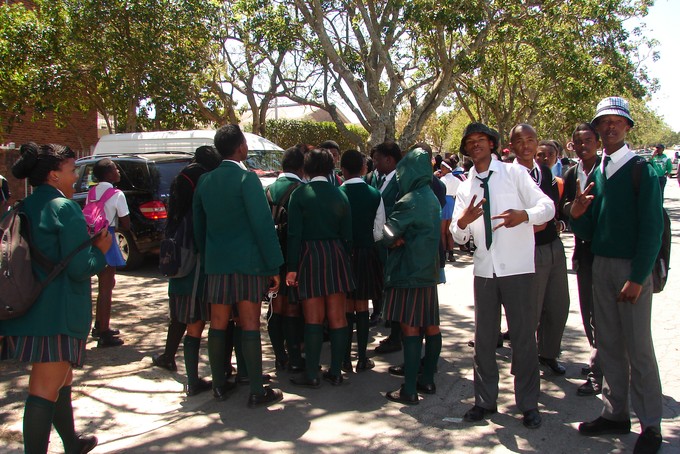 Learners from several schools in the King William’s Town area tried to stop matric exam papers being distributed today in a bid to force the Eastern Cape Department of Education to fix their schools.

The learners complained about a shortage of teachers, poor sanitation and unsafe schools.

Police and teachers succeeded in getting the exam papers out of the school. Some schools started writing about an hour late, but all wrote the exam.

Grade 11 learner Aqhamile Mayekiso from Vukile Tshwete High School said Eastern Cape education MEC Mandla Makupula had been “dodging” students. She said they had tried to set up a meeting three times but each time it had been postponed.

“We are here because we are fed up. It is time someone is held accountable for the lack of teachers in our schools, poor sanitation and bad infrastructure,’ she said.

Students from Vukile Tshwete have previously complained about leaking classrooms with no ceilings or window panes, a shortage of teachers, and lack of safety.

Aqhamile said nothing had changed since their previous protests, and students wanted to know what the Eastern Cape Department of Education was doing to meet the deadline of 29 November for the application of the minimum Norms and Standards in schools.

Read the memo by the King William’s Town learners handed to the MEC.

Equal Education (EE) deputy general secretary Ntuthuzo Ndzomo said EE was not part of the protest, and had tried to speak to students and asked them to return to their schools.

MEC for education Mandla Makupula met students outside De Vos Malan school and told them to send their leaders to meet him at his office. Most of the students then dispersed and the leaders went to a meeting at the MEC’s office.

Speaking to GroundUp before the meeting, Makupula acknowledged that his office received complaints about broken-down schools “almost every day”. He said he had tried to dealt with most of the problems and had been communicating with those involved.

Some of the problems the students raised were the responsibility of schools and not of his office, he said. Schools received money to fix broken windows and doors, said Makupula.

“Unfortunately we can not solve all the issues in one day because we also have a budget that we get each year.”

Several learners complained about a lack of teachers, big classes, and poor conditions.

Malumzi Zwelibanzi , a grade 9 learner at Lukhozi Senior Secondary School, said the classrooms leaked and promises to fix broken toilets had not been kept.

Zizipho Sixam, a grade 11 learner at Dimbaza Central High School, said: “We don’t have a school. At the moment we are using Kuyasa Primary School to attend classes. We don’t even have teachers. sometimes teachers from primary school teach in high school. We are here because we were promised that was going to be fixed.”

“There is a shortage of teachers in our school. We did not have a Xhosa teacher until September,” said Sibabalwe Sam, who is in grade 11 at Hector Petersen High School.

Vuyolwethu Magxwate, a grade 10 learner at Imiqhayi Senior Secondary High School, said there were no windows in the classrooms.

“In some of the classes there are 62 students in one class and this makes it hard to learn,” said Bulelwa Botomani, a grade 11 learner at Richard Varha High School.

“We have a small library in our school. But when it rains, the roof leaks and all the books get wet. Even the roof in our classrooms leaks. We cannot be silent under these circumstances,” said Yongama Patosi, who is in grade 10 at Archie Velile Senior Secondary High School.

Siphosethu Booi, in grade 11 at Hoho Senior Secondary School, said she had come to protest at 6am “because our schools need to be fixed.”

“We want a way forward. If things don’t change after today, we are going to be more radical,” said Ziyanda Gaxa, a grade 10 learner at Qonce High School.