Hundreds of immigrants displaced in Hermanus 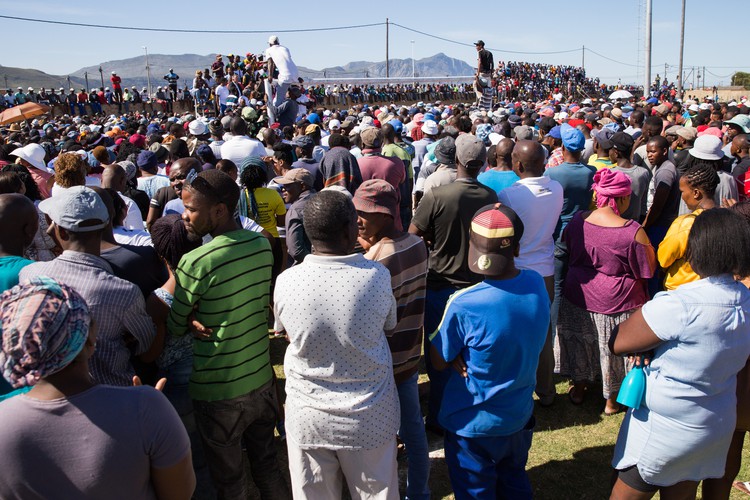 The unrest over land occupation in Zwelihle near Hermanus last week has displaced hundreds of immigrants. They have sought sanctuary in community halls, churches and mosques. Many Somali owned shops were looted. A satellite police station was also torched in the protests.

But on Tuesday morning, the atmosphere was tense. Roads were barricaded with rocks. Several police vehicles, including a water cannon, Nyalas and two cars patrolled the area. There was debris from fire; a burnt out bus stood in a field; the housing department windows were smashed; a building attached to it was burnt down. There was smoke from burning tyres and grass at the dumpsite which the protesters had attempted to occupy. Children did not go to school and adults stayed away from work. The Spar supermarket closed at noon. The KFC and McDonald’s were also closed.

By late afternoon, some residents had started to remove the barricades and clean up the area.

Alexander Zinyemba, a Zimbabwean, said his family was at a safe house. They fled their home on Friday night. He said during the week of protests “few foreigners slept in their homes. Some roamed the streets and others slept at garages. Others were a bit lucky; they were unharmed because their landlords fought for them. It’s quiet during the day and becomes chaotic at night when protesters regroup.”

Addressing the crowd, Madikizela said, “Land has been allocated [for houses] but we want to make sure it is the backyard dwellers that benefit from it.”

Thami Poni, an ANC representative and a resident of Zwelihle, said, “I will only believe [it] after the minister has implemented what he has promised. I can’t trust a politician. In 1964 they forcefully removed my parents from Old Mount pleasant. Today, they don’t want us to own land in Schulphoek because they think blacks don’t deserve to stay in peaceful decent areas and near the sea breeze.”

Theron Mehu, a community leader, told GroundUp that the community was weary of empty promises. He said this was the third visit by Madikizela. The community wanted a timeframe for houses.

“In two weeks’ time the minister will update us on the progress. We need to do a thorough screening as there are other people, including government officials, who own more than two RDP houses, whereas we [backyarders] do not have houses,” said Mehu.

He is staying in the backyard of his mother’s house. His grandparents live with his mother, but he shares his shack with his siblings, his wife and three children. He works as an electrician. His earnings are just over the R3,500 per month threshold, which means he does not qualify for an RDP house, but he does not earn enough to buy a house.

“I am shocked that today the minister said they will allocate us land. Where was that land all these years? It appears as if they have been waiting for the situation to first get out of hand. Elders say the housing problem was first raised in 2004, but the government chose to ignore the residents’ plight,” he said.

Patrick Pikoko, aged 63, has been resident in Zwelihle since 1986. He said he had missed a week of work and as a result he could not afford to visit his family in the Eastern Cape. He said many people would struggle to pay their rent this month because of the unrest.

Pikoko said thieves had taken advantage of the chaos and looted shops. He said it was disheartening that immigrants were targeted. He said the dumpsite which people had occupied was not suitable for human settlement.

The Ismail and Miriam Ebrahim Islamic Centre took in nearly 90 displaced Somalis, Malawians and Congolese. One of them, Omar Taulo, a 22-year-old from Malawi, said he has been living in South Africa for two years. He had never experienced such violence in his life. He wanted to return home to Malawi but he did not have sufficient funds. He was left with only the clothes he was wearing after his house was burned down.

Ibrahim Gabow fled war in Somalia in 1996. He married a Somali woman in South Africa and they have eight children, aged between four and 16. He bought a house in Zwelihle in 2006 and built a spaza shop in the front.

People rioted outside his house all of Friday night, he said. He called the police who advised him to leave with his family. On Saturday at 6am he fled. His neighbour called him to say his vehicle, house and shop were torched and looted. Gabow has not returned to his home.

“I do not understand their actions because they are angry with the government not me. If they think I got money from the government to establish the business, they are wrong. I worked very hard to get where I am today. I lost groceries I had stocked in the shop worth R25,000. I bought the car with money from our Stokvel where I was contributing R500 a week,” said Gabow.

Police provincial spokesperson Captain Van Wyk said 30 people between the ages of 18 and 50 were arrested on Monday for public violence. Five of the arrested were women. Additional police deployments consisting of members from neighbouring stations, public order police and members of the K9 unit were monitoring the situation. The Human Rights Commission was mediating between community representatives and the municipality on Tuesday, said Van Wyk.

CORRECTION: The article originally stated there were three police water cannons. On examination of our photos, it appears there was one water cannon and a number of Nyalas.