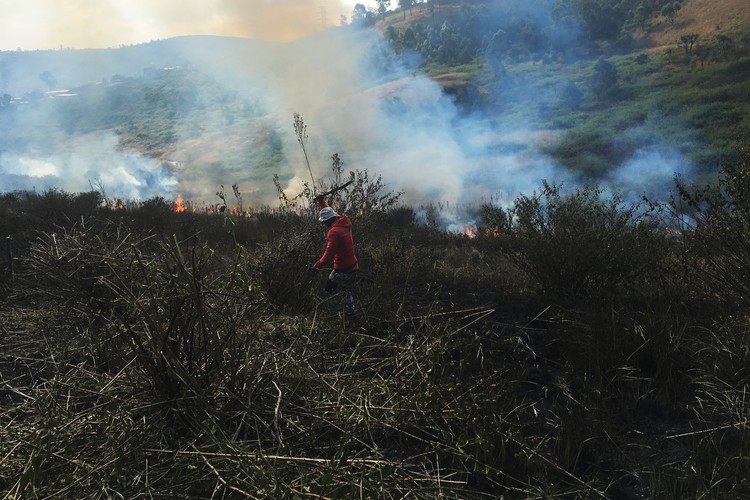 Pietermaritzburg residents have begun occupying municipal-owned land. They have been warned not to start erecting structures. Photo: Nompendulo Ngubane

An open field in Haniville, Pietermaritzburg is littered with glass bottles, long sticks and even paint where people have marked out spaces to build their shacks.

Since Saturday, hundreds of people from Haniville, Copesville and Sobantu occupied the vacant field owned by the municipality. Many of them say they have become impatient waiting for government to provide housing.

The Msunduzi municipality has condemned the occupation and says the land is earmarked for housing development expected to start in 2019.

One of the occupiers Siyabonga Nkosi says he was promised a low-cost house in 2004 but nothing has been done. “I’ve been renting in a shack for years. When I came back from work on Saturday, people were already cutting the land. I saw people choosing spaces and I joined them. I now have my site for my home. We need land and we are taking it.”

Sabelo Nyembe from Copesville says he cut grass and trees to create a space to start erecting a structure. He says residents held a meeting over the weekend where a decision was made to occupy the land.

On Monday, law enforcement officials monitored the area. Nyembe says, “We have people coming from other locations for this land. We can’t be left out. I will use mine for pig farming. We have been told about a housing project. It has been more than 10 years. We are heading to elections next year and they will come with new promises.”

When GroundUp visited Haniville, residents were cleaning bush and greenery to make way for their homes. They also started a veld fire to clear the shrubbery. Some people pegged out their spaces using oil paint, sticks and beer bottles. No structures were built yet by Monday afternoon.

Ward 29 councillor Siphamandla Madlala says he has warned residents that they could be arrested if they continue with the occupation. He says another group also occupied land in Pakis. “I’ve been receiving many phone calls. Some say I have given them permission to invade the land. I did not.”

Madlala says the municipality plans to build 1,176 houses. “The ward has a population of 19,000 residents. It’s true the project won’t benefit all of them. That doesn’t mean that people should invade land. Invasion is against the law. They will be arrested.”

Asked about the occupation Madlala says, “At least they are cleaning the area. Once they create structures, that is when the municipality will be on their case. They must stop what they are doing.”

Msunduzi municipality spokesperson Thobeka Mafumbatha said residents were issued with a court interdict last week. She said should the occupiers put up structures, the municipality would have to intervene. “Ward 29 residents are aware of that. It is against the law and unacceptable. They must be aware that once they set a structure, some will face the law. The municipality police are monitoring the situation,” she said.