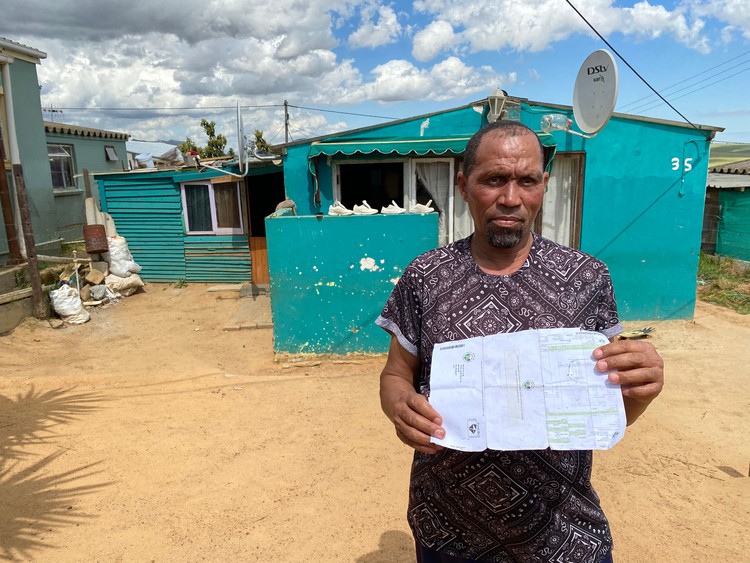 Hundreds of Ilingelethu township residents blocked streets in Malmesbury with burning tyres and rubble on Friday. They were protesting against high utility bills.

This comes three years after we reported on the community’s march against high water and electricity bills.

Western Cape police spokesperson Warrant Officer Joseph Swartbooi said, “The residents protested against the lack of housing and high electricity bills. Police responded with rubber bullets earlier during the day, when young people pelted vehicles with stones on the N7 highway. No one was arrested.”

The group handed over a memorandum of demands to Swartland Municipality Mayor Tijmen van Essen.

On Friday, Izak Van Ryhn, 52, was among those who joined the protest. He showed us his water bill of R594 which he said he paid on 30 September. Van Ryhn is unemployed. He has three adult children and four grandchildren. The household relies on the younger children’s grants to survive.

Van Ryhn said his average water bill per month is R600 and when he buys electricity for R100, he gets 36 units which only lasts for three days. “I can’t afford it [utility bills]. When I don’t pay [water] they cut off my electricity,” he said.

Ward 9 Councillor Bulelani Penxa (ANC), who joined the protest, said backyard dwellers were also no longer able to afford rent and were demanding that vacant land be allocated to house them. He said people also wanted gravel roads in Polar Park to be tarred.

Community leader Xolani Mondliwa said that there are no economic opportunities for the township.

Swartland municipal communications officer, Mart-Marié Haasbroek said they were mindful that the pandemic has had a devastating impact on households. Haasbroek said that during the 2020/2021 financial year, the council had written off more than R14.9 million in irrecoverable debt.

“Our number of indigent households increased significantly since the outbreak of the pandemic. In June 2020, we had 8,810 households that qualified for indigent assistance. We had more than 9,200 this year,” she said.