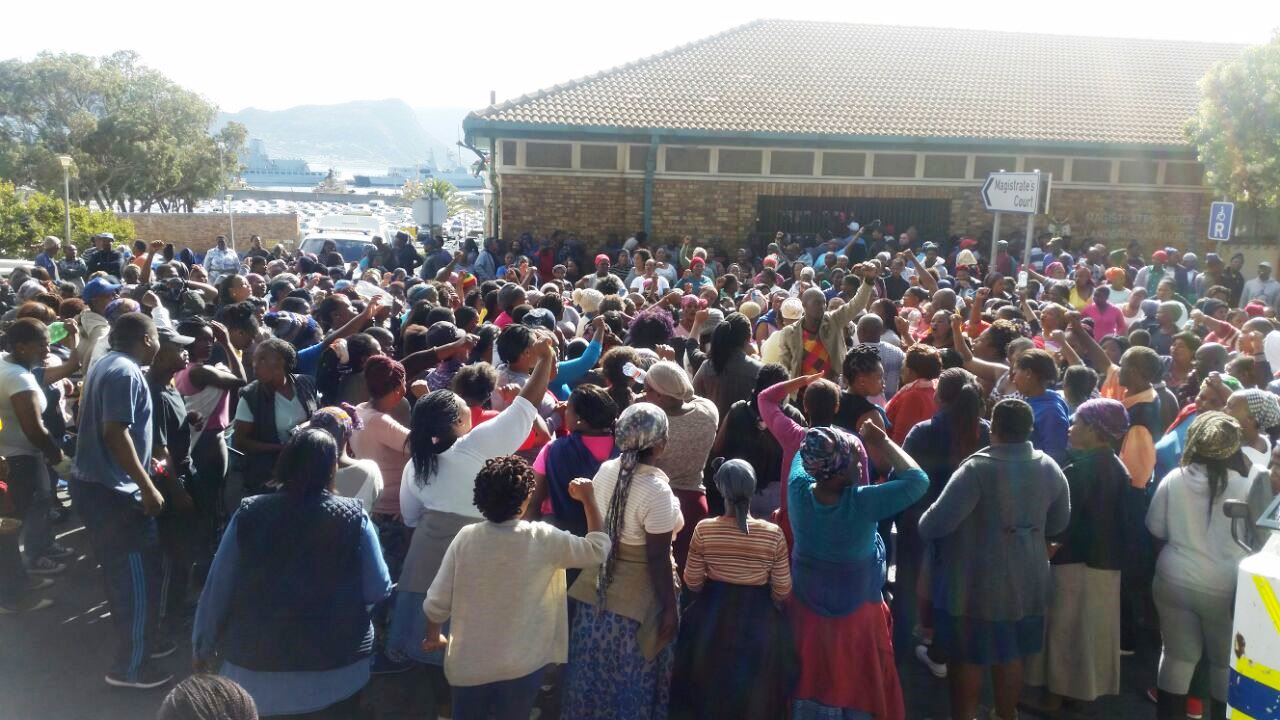 On Tuesday, hundreds of residents from Masiphumelele marched to the Simon’s Town Magistrates’ Court in support of community activist Lubabalo Vellem.

Vellem is accused of murder, assault, attempted murder and public violence, relating to the mob justice murder of a man on 15 September and the assault of another man on 29 September.

Resident Asavela Langeni said, “We want them to see that this community stands together – we want him back in the community.”

Vellem was released in November on R5,000 bail on condition that he reports to a police station three times a week and that for the duration of the court case he stays with his sister in Khayelitsha.

His case has been postponed time and again. Vellem is now appealing his second bail condition and is asking the court to allow him back in Masiphumelele.

“If he goes back, the same thing that is happening outside [protests] will be happening … Imagine what will happen if he does not get what he wants,” said Mapukatha.

“They [Vellem’s supoorters] protest, block the roads, block people from going to work and children from going to school,” he said.

When asked why Vellem was the only one of the accused not allowed back into Masiphumelele, he said, “As you can see outside, he has a lot of influence and since he has not been there, there has been no public violence, no one was burnt and no properties damaged.” The man Vellem is accused of killing was burnt to death.

Devlin introduced 63 affidavits signed by members of the community. After Magistrate Crystal McKenna adjourned for an hour to give the State time to examine the affidavits, the defence agreed to no longer submit them.

Devlin said Vellem was receiving medical treatment in Masiphumelele and that Vellem was a candidate for councillor, currently being vetted by the ANC. If not approved, he would stand as an independent.

State attorney William Daniels said there was not enough information to relax the bail conditions.

The Magistrate agreed that the defendant had failed to show a change in circumstances since the accused’s initial bail application.

Documents provided proved only that Vellem had ANC membership from December 2015 and that his candidate application was sent after the deadline.

The magistrate also found it strange that the defence asked the investigative officer if the accused could receive his medical treatment in Khayelitsha and that the accused had not found this out for himself.

Application to amend the bail condition was therefore denied.

Vellem in tears addressed the crowd waiting outside court all day for him. He thanked the community. He said he has been living in Masiphumelele for 13 years and that is where his life is.