Seasonal farm worker says she was dismissed without full pay and told: “It’s because of the virus” 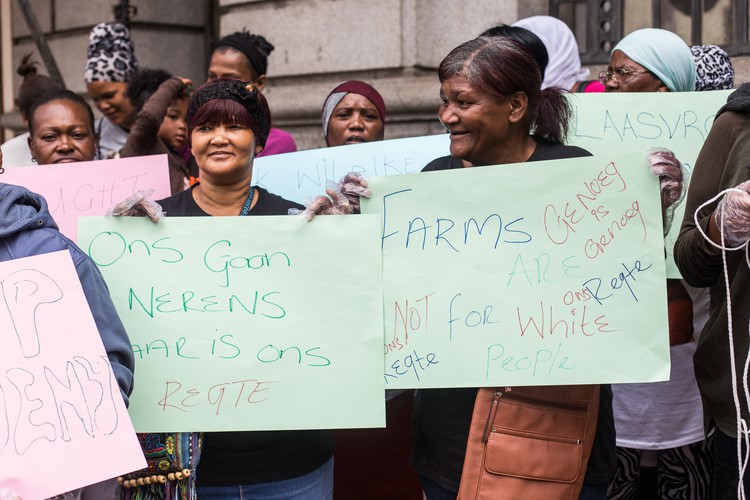 As uncertainty and fear grows amid the Covid-19 virus outbreak, some farms in the Western Cape are closing their doors. This could see hundreds if not thousands of seasonal farm workers like Elizabeth Pietersen without means to provide for their families.

On Friday, Pietersen joined about 30 female farm workers and farm dwellers who picketed outside the offices of the South African Human Rights Commission (SAHRC) in Adderley Street to highlight violations they face daily. The picket was also held to commemorate Human Rights Day on Saturday, 21 March.

Women stood outside the office block wearing medical gloves and singing protest songs. Some held up signs which read “We shall not be moved”, “We are searching for our rights” and “I want to work everyday”. A memorandum of demands was handed over to the SAHRC and a meeting is expected soon.

Some of the issues raised in the memo included farm evictions, occupational health hazards, wages and poor living conditions.

“Farm workers feed the nation. They provide the food we eat everyday, but it is their rights that are being violated,” said Wendy Pekeur from the Ubuntu Rural Women and Youth Movement.

In August 2003 the SAHRC released a report following an “Inquiry into Human Rights Violations in Farming Communities”. In the report the SAHRC made a number of recommendations involving evictions, safety and labour.

Almost 17 years later, Pekeur said that not much has changed. Pekeur said that they are calling for a “farm worker commission” which would serve as a watchdog over evictions on farms. They also demanded that farm workers who are put on leave during this period, must be paid by the farmer.

Another picketer, Elizabeth Leroux, 62, told GroundUp that she was living with her husband who was a farm worker until he died in May 2006. Following years of litigation with the farm owners, she was evicted in February this year. The eviction order was granted despite her age and medical needs required for her cancer treatments.

“I was staying on the farm for 20 years,” said Leroux. With nowhere to go, she may have no choice but rely on the alternative accommodation provided by the municipality, whom she says “wants to dump me in an unsafe place”. Leroux is currently living with friends on a neighbouring farm. “I don’t want to live with others. I want to be on my own,” she said.

The Commission is expected to address the group’s demands at a meeting this week.