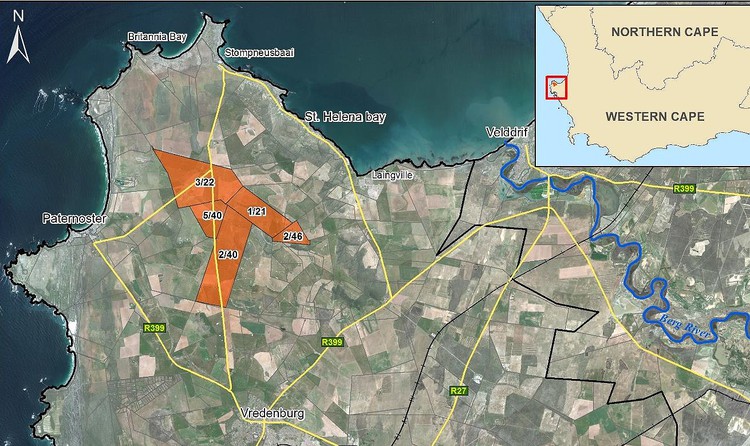 The government is due to announce its decision on a massive new wind energy project on the West Coast within the next two weeks.

This is the proposed 140MW Boulders Wind Farm. It will consisting of 45 turbines standing 165m high. The German-owned developer plans to erect it on farmland close to Paternoster, Britannia Bay, St Helena Bay and Vredenburg.

If approved, the facility with its 44ha development footprint on a 5,100ha site will be situated immediately next to the slightly smaller 47-turbine, 94MW West Coast One wind energy facility that has been operational since June 2015 – creating what will in effect be one giant renewable energy facility on the high-point of the West Coast Peninsula, although the two wind farms will be separately owned and managed.

Critics say that because many of the new turbines will be sited on the tops of the local hills, these will have an effective total height matching that of the Eiffel Tower in Paris or more than twice the height of the Statue of Liberty in New York, with the resulting visual intrusion extending from the West Coast National Park in the south to beyond the seaside village of Dwarskersbos in the north – a distance of more than 90km.

They also argue that the project will have a negative impact on tourism and property values in the area – a region of “outstanding natural beauty and strong vernacular character” – as well as a host of other negative impacts on, among others, birds, bats and heritage resources.

But East London-based consultancy Coastal and Environmental Services (CES), who on 16 September submitted a final Environmental Impact Assessment (EIA) report on the Boulders project to the government, disagrees.

It has recommended that the new project be approved, despite rating nine different visual impacts as High negative and the potential cumulative impact of multiple wind farms in the region on bat fatalities also as High negative.

“Overall… there are numerous potential negative impacts (environmental and social costs) associated with the Boulders Wind Farm. However, the vast majority of these costs can be reduced to an acceptable level by implementing appropriate mitigation measures, except for visual impacts which are traditionally difficult to mitigate,” its report states.

Although these visual impacts are High negative, the consultancy does not believe that these represent a so-called “fatal flaw” that should stop the project.

“This is primarily because it has been demonstrated that this visual intrusion will have no significant effect on property values and tourism… Overall, the need and desirability of the Boulders Wind Farm is not only supported from a planning and policy perspective on a national level but also at the provincial, district and local municipal levels.”

In addition, the project will promote local socio-economic benefits in line with the development goals of the government’s Renewable Energy Independent Power Producer Procurement Programme (REIPPPP), the report states.

A vigorous challenge to this assessment by CES and to possible government approval of the project is being driven by, among others, acclaimed wildlife photographer and environmental author Peter Pickford who lives in the area.

Pickford, who in partnership with his wife Beverly has published ten books, told the environmental consultants he was making submissions not as an individual but as a representative of three property-owning associations along the adjacent coastline: the Cape Columbine Conservancy (18 members), Groot Paternoster Nature Reserve (18 members), and the Shelley Point Home Owners’ Association (1,207 members).

Their combined challenge is based partly on the visual impact of the project, and it also includes concern about whether the developer of the Boulders project – Vredenburg Windfarm (Pty) Ltd – is sanctioning significantly weaker environmental standards here than apply in Germany. German investigative journalists have been alerted to the issue.

In particular, the objectors are challenging the validity of the public participation process managed by the consultants, CES.

Pickford stressed that he and “quite a number” of his fellow opponents were environmentalists and strongly in favour of alternative energy like wind power.

“However, we are nonetheless opposed to development that is rash and ill-considered and will not countenance development for the sake of development when it is apparent that the consequences are potentially dire and that reasonable alternatives exist,” he said.

During a recent public meeting that was called to discuss a separate but linked project – a proposed 132KV power line to serve the proposed Boulders wind farm – Pickford proposed a Motion of No Confidence in the environmental consultants for their alleged lack of impartiality and objectivity for both this project and for their Boulders assessment.

The result was 1,361 votes in favour of the motion, with just ten supporting CES.

“It’s notable that of those ten votes, the majority came from landowners who are likely to benefit financially from the proposed development,” Pickford said.

“I would further venture that the [result] reflects the extreme concern of the local communities of the West Coast Peninsula that a wind energy facility [here] is misplaced, in considering this singular and unique geographical feature as a suitable wind farm site, and that tourism is by far and away the preferred developmental path of this area.”

But Pickford’s criticism is rejected by CES managing director Dr Ted Avis, who told GroundUp that the company had “carefully followed the regulatory EIA process”.

“In particular, significant effort was placed on the public participation process to ensure that all interested and affected parties were afforded an opportunity to engage with the environmental consultants,” he said. “It’s our opinion that the environmental impact report provides an objective and sincere analysis of the environmental, social and economic consequences of the wind farm.”

Avis said that while their report identified and drew attention to visual impacts of high significance, it concluded that the overall negative consequences of the project did not outweigh the potential benefits.

“This conclusion has not been accepted by Mr Pickford and others, who believe that [we] have been dismissive in the way [we] have dealt with interested and affected party comments. The issuing of a vote of no confidence is simply an attempt to discredit the company and the EIA process to date. We are confident that we’ve acted professionally and produced reports of a high standard.”

Department of Environment, Fisheries and Forestry spokesman Albi Modise confirmed to GroundUp that they had received and formally acknowledged Pickford’s motion of no confidence in the consultants.

The Department had also received his “Record of Protest” about the environmental assessment of the power line project, but had not responded to this because it was in the process of dealing with the wind farm application, Modise added.

That gives the Department until 1 January, if this writer’s calculation is correct.