We will not vote if this is how we are treated, say shackdwellers 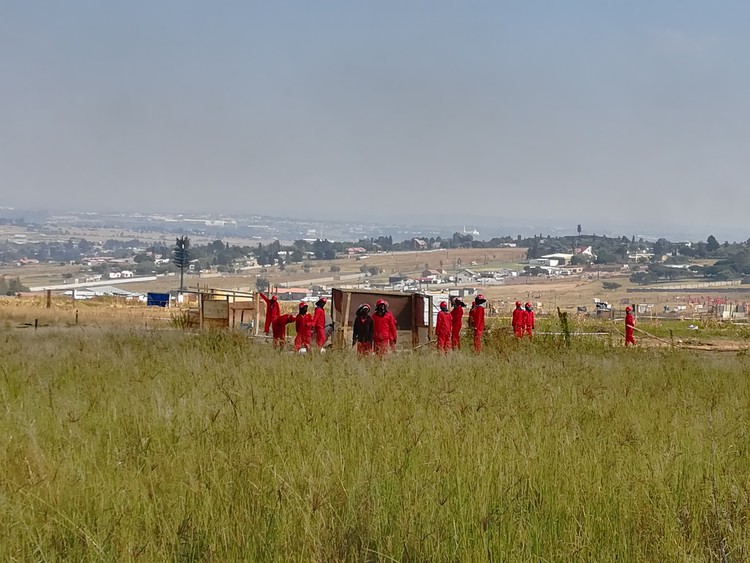 One property, named ‘Mayibuye’ by the occupiers, was first occupied in February. The other property, across the road, was occupied about three weeks ago.

Occupiers in Mayibuye said the JMPD had evicted them about four times since February but this was the first time Red Ants had been involved. This was the second time people living on the property across the road had been evicted.

Some occupiers watched from the sidelines as their homes were being demolished. Beds and clothing were strewn across the property while corrugated iron and wood — once the walls of the occupiers’ homes — were being burned.

Thabo Malekutu, one of the occupiers in Mayibuye, said he had received a call from one of his neighbours while he was at work in the morning. “They told me they heard rumours that Red Ants were coming to demolish our shacks so I just left work without even giving notice,” he said.

When he arrived, he said, he had tried to salvage as much as he could but his materials were still burnt.

Standing a few kilometres away from what used to be his home, Malekutu said: “I don’t even want to go close because it’s going to stress me.” He said he had paid R1,500 to a community leader for his stand and R3,500 for his materials. “And now it’s all gone. It’s so painful.”

Malekutu said his two children, aged two and seven, had been at crèche at the time of the eviction. “What am I going to tell them when they get back and see they have no home? Where are we going to sleep tonight?” he asked.

Another occupier from Mayibuye, Kgomotso Madisha, said his ID had been among the belongings burnt during the eviction.

He said the Red Ants and JMPD officers had not given people time to remove all their belongings from the shacks.

“They just started burning … We tried to save a few things but a lot of my clothes and documents were still inside,” he said. “How am I going to find a job without an ID and how will I vote on 8 May?”

After demolishing the shacks in Mayibuye, Red Ants and JMPD officers started demolishing shacks on a property across the road.

Dipuo Mlangeni, one of the occupiers on that property, said she had lived in a shack with three other family members.

She said her bed, kitchen appliances, blankets and study materials had been burnt during the eviction. “We came here because we don’t have money and we need a place to live … This land has been standing empty for years. Our government is not right and they still want us to vote. Let it be clear: we will not vote if this is how we are treated,” said Mlangeni.

She said the occupiers had no choice but to rebuild their homes in the same place because they had nowhere else to stay.

Another occupier Victor Molaobi said: “They see us as staying here illegally but when it’s time to vote, they want us all to vote.”

He said most occupiers would not be voting in next week’s elections.

Asked whether there was an eviction order by a court, JMPD spokesperson Wayne Minnaar said: “Any shack or house that is built on land that has not been hired or purchased is illegal and will be removed.”

Minnaar told GroundUp that Red Ants had been brought to assist JMPD with evictions because there are so many shacks. He said JMPD had demolished about 1,000 shacks.

He said JMPD demolished about 40 or 50 illegal shacks a day on average in Johannesburg. He said he did not know who owned the properties which were demolished on Tuesday.

Asked for comment, a City of Johannesburg spokesperson said he would confirm on Thursday whether the properties were City-owned and whether there was an eviction order. The City’s comment will be added once it is received.