Former members of Prophetic, Healing and Deliverance Ministries say the money they invested has disappeared 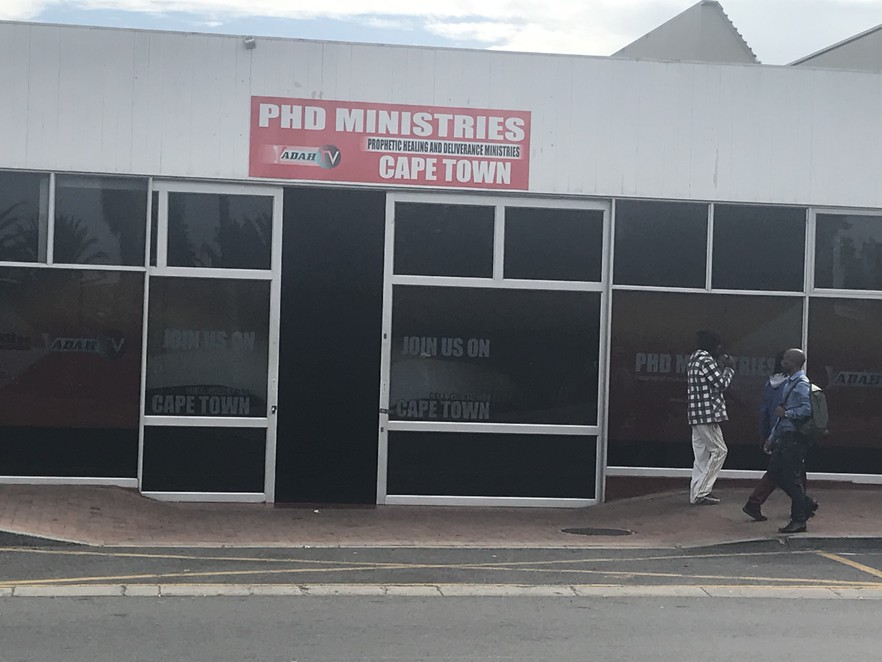 The Prophetic, Healing and Deliverance Ministries church has been accused of scamming members out of money they invested. Photo: Tariro Washinyira

Former members of the Prophetic, Healing and Deliverance (PHD) Ministries in Cape Town have accused the church of scamming them out of money they invested in housing and other projects.

Founded in 2012 by Walter Magaya, PHD is one of the controversial prosperity gospel churches in southern Africa that have lured a multitude of followers. The ministry has branches in Zimbabwe, Durban, Pretoria, Johannesburg, Zambia and Australia.

The disgruntled members had signed a memorandum of understanding (MOU) with a subsidiary of the church’s investment arm, giving them rights to a residential stand in Zimbabwe, but the company has neither delivered the stand nor reimbursed their money as promised.

The agreements were signed with Planet Africa, or with its subsidiary Yadah Connect. Planet Africa is described in the MOU as “the investment arm of the Prophetic Healing and Deliverance Ministries”.

The MOU says “Planet Africa in 2016 launched housing projects around Zimbabwe to give effect to PHD Ministries’ Redemption Program, whose objective is to see every partner of PHD Ministries owning a house of their own”.

The MOU, of which GroundUp has copies, recorded an offer by “partners” to purchase a residential stand “in any area in Zimbabwe where the seller has acquired and is developing and subdividing the land into individual residential stands, upon completion of such subdivision”. The seller (Yadah) accepted the offer “subject to availability” in the location chosen by the partner.

The price of each stand was to be determined later, depending on location and size.

Meanwhile the “partners” undertook to pay a deposit of $1,000 as a “commitment fee”.

The church promised to allocate the residential stands after the land had been sub-divided by the municipality. Meanwhile “partners” were to make further payments over two years, according to what they could afford. In the MOU they acknowledged that the land was not yet subdivided but that they would nevertheless start making payments.

The MOU also states that Yadah had to “service the land within a reasonable time from the date of signature of this MOU” and in any event not later than two years. If the partner did not keep up the payments during the two years, 80% of his or her investment was to be refunded. If, on the other hand, Yadah failed to subdivide the land within the time frame, the company was to pay the investor “the full amount paid” plus 20%.

More than three years later, the members say, the church has failed to deliver a residential stand or to refund their money. GroundUp has not managed to reach the church for comment, in spite of repeated attempts.

Kanonhuwa Daniel is owed $4,000 (about R70,000 at current exchange rates). He invested in the housing project after he sold his cows in Zimbabwe. On 8 November 2019, he was stabbed and hospitalised for about two months. He then requested a refund to buy his family food and pay rent. He claims the Cape Town officials said they could only pay him R23,000. Since then he has been battling to get any money at all.

She said in December 2018 she went to Zimbabwe for a meeting with Magaya at the Yadah Hotel in Harare, planning to get her money back. She said the meeting was attended by a huge crowd of other investors.

“I desperately wanted my money but didn’t claim it back because I wanted my $5,000, not bond notes.”

Since then she has been trying to get her money back, without success.

Another former member, who refused to be named, paid PHD $4,400 (R76,000) in instalments between 2016 and 2017. GroundUp has seen the receipts. He has not been given a residential stand and he too is battling to get any of his money back.

The member said the church had breached clause 10 of the housing project agreement which reads:

“The MOA shall be terminated if the seller fails to subdivide its land within the stipulated time frames of twenty four months from the date of signature of the MOA. The purchaser shall be entitled to cancel the agreement and reclaim a refund of the full amount paid by the purchaser plus 20%”.

Members say the church is not following dispute procedures outlined in Planet Africa company agreements. Clause 6 states: “All disputes in connection with the terms of this agreement shall be resolved amicably, through the most senior officer at Yadah Connect from time to time. In the event that the dispute remains unsolved for 30 working days, the aggrieved party may refer the dispute to arbitration.”

“Instead, we are getting intimidated, threatened and mocked by the Cape Town office where we paid our money,” said Ephraim Shonhiwa, spokesperson for the group of disgruntled investors.

GroundUp met Shonhiwa in February at the offices of People Against Suffering and Oppression (PASSOP) where they were seeking help. He said people had been lured into investing in PHD’s housing and other projects through the church’s television station, Yadah TV. He and others had thought the projects were above board, he said, especially since the Cape Town office of the church had issued “receipts”. GroundUp has seen the receipts, which do not specify what the money was paid for.

He said Magaya could do what he liked with tithes and offerings from members of his congregation. “But we want the money we paid for business refunded.”

In an email to GroundUp on 3 March, Reverend Lionel Louw, Western Cape chairperson of the South African Council of Churches (SACC) encouraged the affected church members to lay charges with SAPS and to report the church to the South African Human Rights Commission.

“We in the SACC view with great concern the unfolding of the Prosperity Gospel events. We have to look afresh at the life and ministry of Jesus Christ as He identified with the poor and marginalised. These contemporary events contradict what we experience in Jesus Christ. We urge those who have fallen victim to financial scams to allow the law to take its course in respect of the perpetrators of these schemes. We encourage them to seek redress through the justice system.”

On 24 February GroundUp contacted PHD ministries through an email and attached receipts of the money paid by the complainants. The email was ignored. On the same day, a WhatsApp message was sent to the church’s spokesperson Admire Mango. He read the allegations but did not respond.

On 25 February GroundUp called three times on the office number listed on the church website [0717523715] which is said to belong to the Western Cape leader, Albertina but it was ignored. GroundUp then called Joy who works in the office when Albertina didn’t pick up. Joy listened to all the allegations till the end but instead of replying she dropped the call. When GroundUp attempted to call her for the third time in the late afternoon, she dropped the call again.

On 9 March when GroundUp saw that Mango was online, we asked for a response to our questions but he ignored the request. GroundUp called several times on his mobile number, but he didn’t pick up.