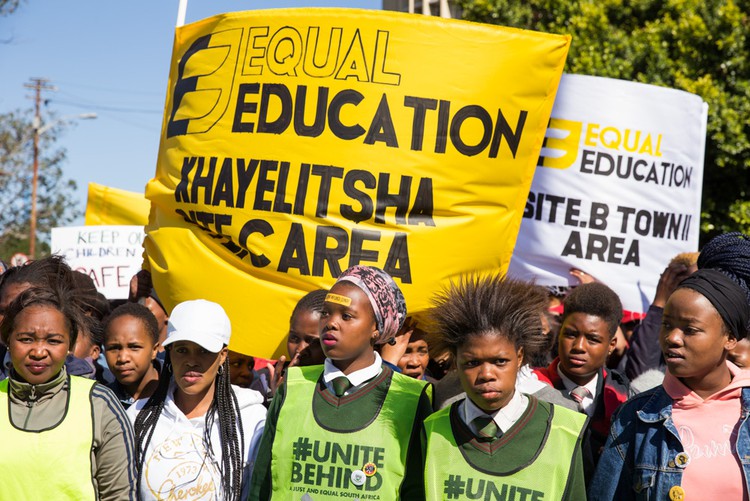 Thousands of learners marched in Cape Town, demanding that steps be taken to improve safety in schools. Photo: Ashraf Hendricks

By Tariro Washinyira and Bernard Chiguvare

About five thousand people from various organisations, including parents and school children marched on Friday in support of safe schools and communities in the Western Cape. The protest was led by Equal Education (EE). They marched from Keizersgracht Street to Parliament and handed a memorandum to Allan Subban from the Department of Basic Education.

A teacher of 30 years at Wellington High school who asked not to be named said: “There is no support for teachers and principals when it comes to safety of school children. It is unfair that when there are gang fights principals should seek permission to close school from the department.”

The memo was addressed to Premier Helen Zille, Minister of Basic Education Angie Motshekga, MEC for Education Debbie Schafer, Minister of Police Fikile Mbalula, MEC for Community Safety Dan Plato and others. It called upon the recipients to make public statements recognising the safety crisis in the Western Cape. It also called upon them to take steps to improve safety in schools.

It called for funding to “ensure that all public schools have adequate security fencing, access control, metal detectors, alarms, and panic buttons. We demand the adequate provision of guards and policing in ‘red zones’ and gangland hotspots.”

Deputy-Head of Equal Education in the Western, Noncedo Madubedube, explains why they are protesting. Video: Ashraf Hendricks

The march to Parliament was the culmination of a series of marches by learners in the Western Cape organised by Equal Education. On Thursday, 15 learners from Bardale and Manzomthombo high schools marched to Mfuleni police station and handed a memorandum to the commander Brigadier Pieter Galant. The students demanded visible policing in the mornings and afternoons when school starts and finishes. They also want random searches at their schools.

Akhona Mabanga, a grade 11 learner from Bardale, said the memory of learners killed in front of their school still haunts her. “I feel very unsafe when I am at school because some learners bring dangerous weapons to the classrooms,” she said.

Phaphama Mabotshwa, a grade 11 learner at Manzomthombo, said he once narrowly escaped being robbed on his way home after school.

One march in Kraaifontein had to be cancelled. Athini Matshikwe of Equal Education said the Masibambane and Bloekombos schools did not proceed because gang violence in the area left four people dead in a shooting on Thursday afternoon (GroundUp has not confirmed this).