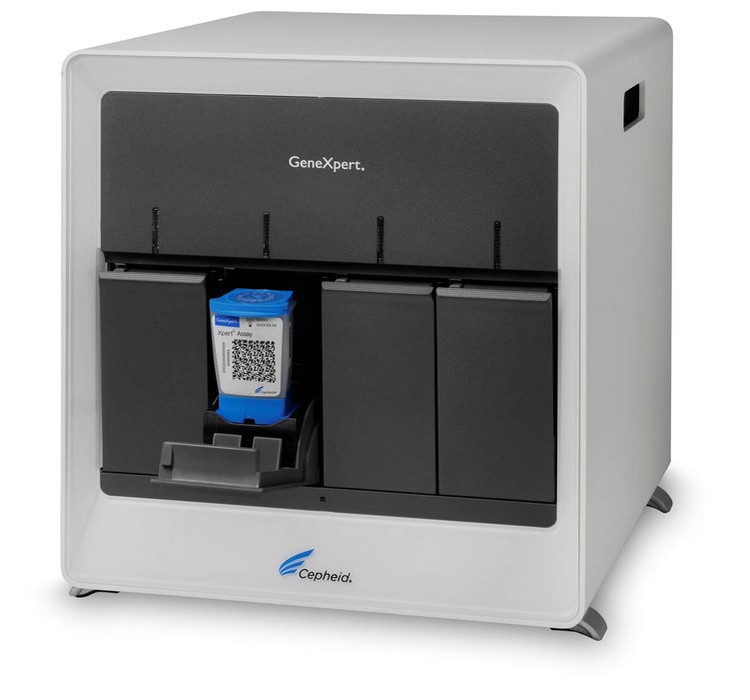 Machines like this (Gene Xpert) can be used to test for Covid-19, but they require cartridges to be imported into the country and demand currently appears to far exceed supply. Photo: Wikimedia user Wizi09 (CC BY-SA 4.0)

By Liezl Human and GroundUp Staff

Two Cape Town doctors have independently told GroundUp that Covid-19 results from the National Health Laboratory Service (NHLS) are taking at least a week to reach patients. Private sector tests are now taking up to 72 hours.

One of the doctors, who works in a public sector hospital, told GroundUp that there is a backlog of about 10,000 Covid-19 tests at the Green Point NHLS facility in Cape Town.

The doctors said that the delay in test results makes the contact tracing process a lot more difficult.

“The utility of the community screening and testing is close to zero now but continues to be pushed by the Department of Health. It’s causing huge delays in test results for hospitalised patients. So this strategy is actually impairing service delivery,” said one of the doctors.

Western Cape Premier Alan Winde has also written to President Cyril Ramaphosa expressing concern over the delayed tests. “Policy decisions, such as the decision by the Department of Labour that a person must test negative before being allowed to return to work and other government departments requesting testing for their staff members, place additional strain on the system and further compound the problem,” he wrote on Twitter.

“As the Western Cape, and other provinces, ramp up testing, they are finding it challenging to keep up and process these tests, resulting in a nationwide backlog in the results,” said Van der Heever.

Once a person tests positive, the Health Department immediately identifies their contacts and screens and tests them, after which they have to be quarantined or self-isolated.

“The delay in results delays this process and puts pressure on these systems when results are released in larger batches as they process the backlogs,” Van der Heever explained.

Van der Heever told GroundUp that there has been an average of about 1,600 people tested per day over the past 14 days in the Western Cape.

Nationally there have been about 10,000 Covid-19 tests per day over the past week, according to updates by the National Health Laboratory Service (NHLS). The number of tests conducted has also been steadily rising. But a test is presumably only counted once the final result is processed, which could have been a week or more ago.

It is now 8 May and not even the 15,000 target, let alone the 36,000 target, is close to being met. One of the likely reasons is that worldwide demand for cartridges for Gene Xperts – small machines that give results in 45 minutes and can be transported on the vehicles driving around communities to test people – far exceeds the supply by Cepheid, the American manufacturer of the machine and cartridges (see this New York Times report).

Despite this, South Africa is testing proportionately more people than countries at comparable levels of development. Wikipedia is maintaining a table of tests per country. South Africa as of 7 May had tested 4,753 people for every million citizens. By comparison, it’s 1,594 and 3,499 per million for Argentina and Brazil respectively. No other African country even comes close (Egypt is at 899 per million). On the other hand Uruguay at 6,322 and Chile at 10,456 per million are well ahead of South Africa.

It takes about five days to show symptoms of Covid-19 after being infected. If it’s taking a week for test results to be processed, it likely means that the daily Covid-19 statistics released by the Minister of Health estimate the epidemiological situation nearly two weeks ago.

In the meanwhile Covid-19 cases in the Western Cape are accumulating from Groote Schuur Hospital in Cape Town, to relatively remote areas like the Witzenberg municipality.

The NHLS said on Friday afternoon: “The past week has been a challenging one … in that the test kits ordered could not be delivered due to logistical challenges that were outside of the suppliers’ control. There were further delays in transporting the supplies due to the
lockdown, flight cancellations and the long weekends.”

The statement continued: “Due to global shortages, suppliers did not have enough stock to supply the NHLS with the numbers it has ordered. Coupled with a massive surge in testing from certain provinces, this has meant that the demand exceeds the supply. The NHLS has put in steps in place to meet the demand, and these will impact on the turnaround.

“The NHLS has been working together with its academic partners and private laboratories to conduct tests as quickly as possible. Over the last two days, some supplies have arrived and been distributed to our laboratories. We are working together with our suppliers towards increasing the numbers of supplies into the country and ensure a steady flow of regular supplies.”