How women’s shelters are coping with lockdown

“We couldn’t handle each other” in a small home 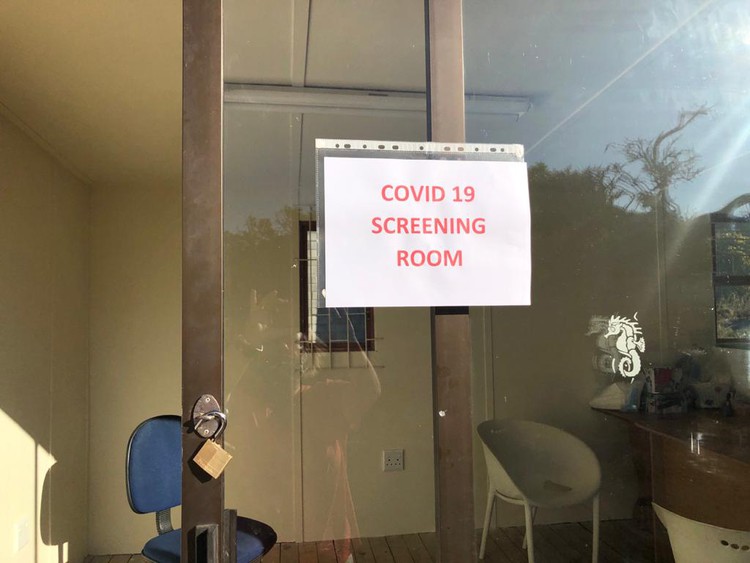 Screening room at The Safe House in Cape Town. It has doubled its capacity for women and children who have suffered abuse, as shelters adapt to the effects of the lockdown. Photo supplied

Tammy (name changed) arrived at the Safe House in Cape Town about two weeks ago in the middle of the night, after escaping from a dangerous situation at home and going to the police for help. “It would have been better had it not been lockdown,” she says. “I felt like I was stuck and there’s no way out, while I’m being threatened.”

Once she was able to get out of the home, the lockdown made it particularly difficult to make arrangements or seek help. “You can’t do anything about your situation … You need to run somewhere, so how are you going to get yourself to a safe place or a home or get another place to stay?”

Tammy says she is a bit sad thinking about the future, but that she’s been given a lot of assistance and practical information about Covid-19 that she did not have access to before. “I think I have more knowledge now about how to handle myself outside,” she says.

Tessie (name changed) has been in a shelter before and came to the Safe House a week ago. She has been married for ten years and said her husband abused her “verbally, physically and mentally”. The lockdown exacerbated this, she says, “because we couldn’t handle each other” being together in a small home for extended periods of time without going to work.

When she told her husband that she had had enough and was leaving, he locked her in. She managed to leave while he was out. But she was seen by one of his friends. Her husband confronted her, but let her go once she gave him money, after going to several ATMs. She was able to call for help through the national Gender-Based Violence Command Centre emergency line.

Tessie says that her journey to the shelter this time was longer because the police in her area were busy during the lockdown, but she says they were more helpful than the previous time she needed to go to a shelter.

Women’s shelters across the country have put measures in place to adapt to the Covid-19 pandemic.

Kathy Cronje, director of the Safe House and vice-chairperson of the Western Cape Women’s Shelter Movement, explains that the province has designated four frontline Covid-19 shelters. This means that the Safe House has doubled its capacity to 20 beds to receive cases from all over the city for a two-week isolation period before women and their children are then transferred to shelters in their local areas.

Normally residents stay up to three months and go through a longer recovery and healing process, including dealing with legal matters like protection orders. Cronje says: “Now what we’re doing is making sure that their medical needs are met, trauma debriefing, the beginnings of the programme, and just let the ladies actually breathe and be.”

According to Cronje, the Western Cape saw a decrease in gender-based violence cases at the beginning of the lockdown, but the numbers started increasing after the extension was announced. Cronje believes this is because the women could not bear staying longer. She says perhaps one of the reasons is that at the beginning of the lockdown the fear of the virus, the unknown, was worse than the fear of the known, the threat of domestic violence.

She also says there may be a decrease in the ability of people to report cases during lockdown and that they have seen situations where women and children could not leave their houses and police went in to release them.

In contrast to the Western Cape, the national GBV Command Centre saw a spike in calls in the first five days of lockdown. According to the Ministry of Police over 2,300 calls came in, more than twice the average before the lockdown, and 148 people were charged.

Police Minister Bheki Cele said on 22 April, almost a month into lockdown, that “we have noted a remarkable decrease for domestic related crimes” comparing the lockdown to the same period last year.

Major Moya Hay from Beth Shan in Pretoria, run by the Salvation Army, says the shelter is currently full. New residents are accepted once they have been screened for the virus and isolated for one week. As with the other shelters, various hygiene measures are in place for staff and residents.

She says while the mood among the residents is positive, “there is a level of frustration due to not being able to go out, including not being able to visit family,” for instance children who are not at the shelter with their mothers. The shelter is allowing increased phone contact to mitigate this.

Hay says there has been an increase in the number of callers to the shelter needing telephonic counselling. She says that some of the issues brought up include women not being ready to leave their situations, having restricted entry and exit or being afraid “of lockdown and being cut off from family for an indefinite period.”

Director of the Open Door and the Ikhaka Le Themba shelter in Pinetown KZN, Thora Mansfield, says that the mood of the shelter is normal but that there has been an increase of about 20% occupancy since the lockdown. Like in Pretoria, phone requests for help have increased.

The organisation usually focuses only on abused persons, but currently is taking in homeless women. She says: “This has not been a challenge – after the two-week isolation they have been reintegrated into the shelter and after lockdown hopefully and prayerfully will go back to their families.”

Cronje says: “I think it’s just a matter of when the virus gets here.” She says that she and her staff understand the risk they’ve taken and that they are working in close partnerships with local hospitals and authorities. The house created a Covid-19 screening room in a donated Wendy house and repurposed a room in which residents can isolate if they are suspected of being infected.

CORRECTION: An earlier version of the article incorrectly stated that residents normally stay up to six months in The Safe House. It’s three months.