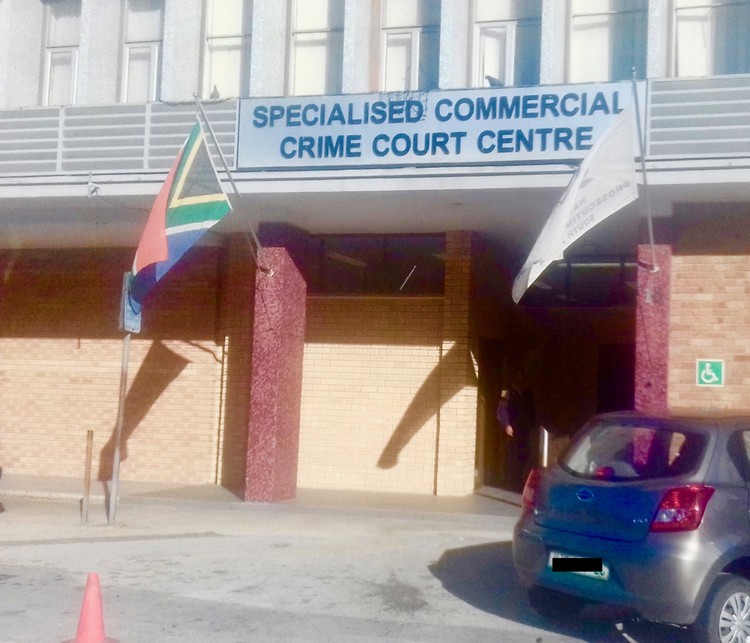 Mthuthuzeli Swartz and Syed Nadhir Mohiudeen are on trial. It is alleged they fraudulently sold railway line they didn’t own. Photo: Joseph Chirume

Former acting CEO of the Passenger Rail Agency of South Africa (Prasa), Mthuthuzeli Swartz and another accused Syed Nadhir Mohiudeen are facing charges of outlandish fraud allegedly involving the sale of a large chunk of Eastern Cape railway line that was not Swartz’s nor Mohiudeen’s to sell.

The matter will return to the Specialised Commercial Crime Court in PE on 6 September.

Mohiudeen’s name is usually spelt Mahuideen in the media (including GroundUp), but in this report we use the spelling in the National Prosecuting Authority’s charge sheet.

Swartz was dismissed from Prasa on 8 November 2018. He has denied any wrongdoing.

The charge sheet, which is marked as a draft, states that Mohiudeen owned a Cape Town based company called Spanish Ice.

Adrian Samuels was the sole director of a company called Akisisa, where he worked with his cousin Cedric.

The charge sheet reads that in September 2012, Mohiudeen phoned Adrian Samuels saying he had 360 000 metric tons of used railway material for sale which he claimed to have obtained directly from Metrorail. Mohiudeen claimed he could supply Samuels with 30,000 tons over 12 months. Mohiudeen claimed there was a Turkish company interested in buying the material.

Mohiudeen allegedly took the cousins to view the railway stock in Woodstock, Cape Town. Afterwards they met Swartz at a coffee shop. The charge sheet states that Swartz “confirmed at the meeting that Spanish Ice was involved in various programs with Metrorail and that plenty of work could be done that was beneficial to all parties”.

The cousins then allegedly gave the two accused a bank guarantee letter that they could pay R5million. Mohiudeen then informed the cousins that the 25,000 tons of railway they saw at Woodstock could be uplifted on 25 October 2012.

But when the cousins arrived in Cape Town to collect the material, they were met with excuses about why the delivery could not take place.

The four men then allegedly met at the Waterfront and Swartz asked for a R1.5 million upfront payment. This was paid and Mohiudeen signed receipt of it. But the delays continued. So the four met again. This time, alleges the charge sheet, Swartz suggested they go to the Eastern Cape to try to source railway material there. This they did on 1 November 2012, when they travelled to Sterkstroom and Maclear.

The cousins asked for documents regarding the upliftment of the railway material (presumably proving that what they were being offered was legal). Mohiudeen promised that they would receive it.

And then this happened:

The Samuels, allegedly with the permission of the accused, put together a workforce and began uplifting the railway line between Sterkstroom and Maclear.

The charge sheet says buyers were approached for the rail material that was being uplifted. It claims the uplifted rail material was loaded onto trucks and taken to the Durban Harbour and loaded into containers belonging to the buyers.

Upon being contacted, Adrian Samuels allegedly informed Transnet that he had been sold the rail by the accused. Transnet informed Samuels that the rail could not be uplifted and had never been sold to Spanish Ice or Swartz or Mohiudeen.

“At that stage approximately 42,000 metres of railway line had already been uplifted,” reads the charge sheet. “The railway line between Sterkstroom and Maclear was never for sale and in fact was in the process of being refurbished to service a coal mine project in Indwe.”

Swartz and Mohiudeen are presently out on R2,000 bail each.

(Thanks to Fin24 for assisting with editing this article, which has been changed since first published on GroundUp.)

Read previous stories on this case.