Route to Cape Town is supposed to be for MyCiTi only, but taxis have starting using it again 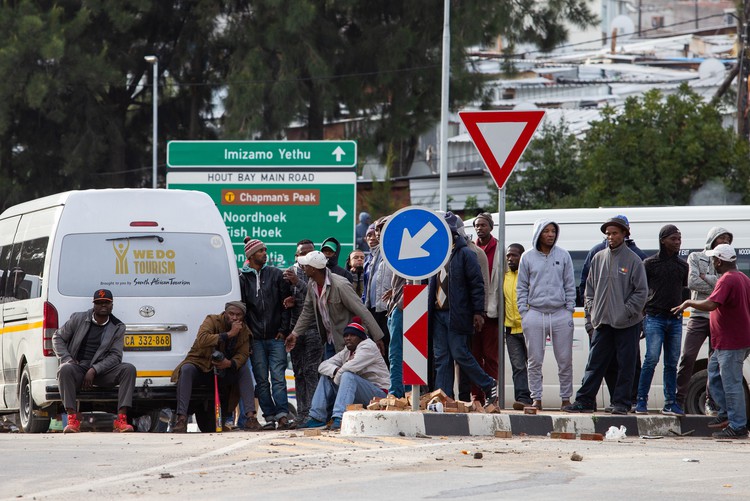 Protesters at the circle at the entrance to Imizamo Yethu blocked the road on Thursday. Photo: Ashraf Hendricks

Access to Imizamo Yethu in Hout Bay was blocked for several hours on Thursday because of a tiff between two taxi organisations.

About 400 people, consisting of taxi owners and drivers from the Cape Amalgamated Taxi Association (CATA), together with Imizamo Yethu residents, protested against the confiscation of three CATA taxis by traffic police on Wednesday. The taxis were operating on the Hout Bay to Cape Town route without permits.

The protesters also demanded an intervention from City of Cape Town officials to stop what they call “an illegal operation” by another taxi association, CODETA.

The protesters barricaded the circle at the entrance to Imizamo Yethu and the Chapman’s Peak side of Hout Bay with burning tyres. They also blocked the west circle on Victoria Road (at the bottom of Valley Road) with rocks and trees, but this was a short-lived barricade, because police dispersed the protesters with teargas.

Many Imizamo Yethu residents especially those who commute by taxis did not go to work.

According to CATA’s Deputy Chairperson Sivuyile Tyhopolwana the route to Cape Town was stopped after it was “sold” to MyCiTi. “We are protesting today because we see taxis that are from CODETA operating in our area. We have approached the board [that processes permits] to ask them to come and address the issue between the two parties because they are also illegal. They have no permits to operate.”

“We want our people to be transported by us. We have also asked that we share the route because we didn’t want it to escalate to violence, but even that was denied. We want the government to intervene and solve the problem before people start losing their lives,” said Tyhopolwana.

A taxi owner named Bongani (surname withheld) said they had approached the members of CODETA to try and find a solution but were met with violence.

“They started shooting and one of their own died and one of our members was badly injured. We have asked the station commander so many times to intervene and hold a meeting between the two parties. That never happened,” he claimed.

“We decided that because they were also operating illegally, that we will also operate without permits but our cars were taken,” said Bongani.

He said the taxi drivers who “sold” the route to MyCiti had left.

The MyCiTi bus to Cape Town operates in the area and stops at Imizamo Yethu. No taxis are allowed to operate on the route, but it appears both taxi associations have begun transporting commuters on the route recently.

In contrast to Tyhopolwana, Bongani does not believe the route can be shared. “We want the City to bring back our cars and remove CODETA from this community, because they know that two bulls can’t rule the same kraal,” he said.

Community leader Gery Krweqe said residents joined the protest because taxi issues involve not only the owners but commuters as well. He said that he had approached City officials to try and resolve the issue before it gets out of control.

“The residents are supposed to get to work using the very same taxis. They have brothers and husbands who are operating these taxis. We do not condone violence,” he said. He and other protesters were upset that City officials did not address the protesters.

We were unable to get comment in time for publication from CODETA or the City.