Cyferskuil leader attacked in his home after protest stops construction 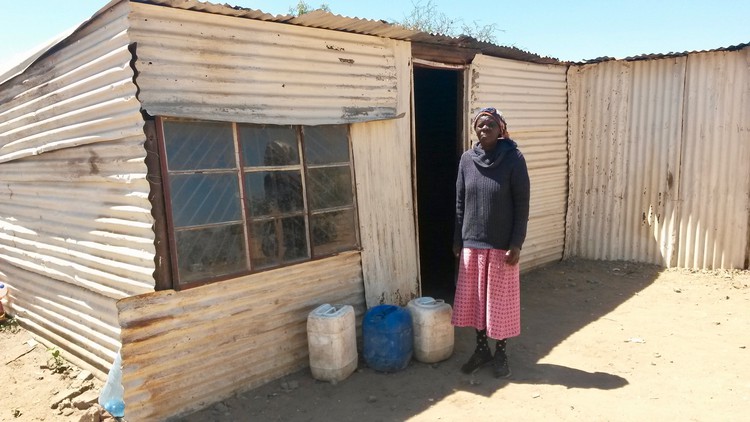 Paulina Kgonothi was told that her application was unsuccessful for a house in the Cyferskuil project. “I am raising five children alone with monthly social grants and I can’t afford to build myself a house,” she says. Photo: Sana Mabena

Leaders of recent protests for the reallocation of RDP houses in Cyferskuil, north of Hammanskraal in the North West, say they fear for their lives. One leader accuses the Moretele Local Municipality of targeting him, although his attackers are unknown.

Protests by the Cyferskuil residents in September brought a 100-unit housing project to a halt. They said beneficiaries had included residents who already had houses and others who could afford to build their own homes.

“I fear for my life,” said Johannes Pale, who was attacked in his home by unknown assailants. “I am scared that they will return … I am in serious pain. I am struggling to walk.”

He said that at around 10pm on 10 October there was knocking at his door. “I looked outside through the window and saw two white private cars fitted with blue lights in front of the gate. I opened the door as I thought they were really the police,” he said.

Six men pushed their way in and beat him with a pick handle. Three of them wore balaclavas. They then took off in their cars after firing two shots in the air, he said.

Pale was taken to Bela-Bela Hospital.

“The attackers kept asking me who I thought I am to stop the housing project,” said Pale. “I was attacked because of my role in organising the protests.”

Pale suspects a senior politician, but we have been unable to get comment from the politician.

Moretele Local Municipality spokesperson Mothupi Malebye did not reply to our questions on the allegations of intimidation and harassment.

Police spokesperson Motshegwa Nkabinde said, “We can confirm that a case of assault with grievous bodily harm was opened at Cyferskuil police station on Friday 11 October. At this stage we cannot confirm whether the incident is linked to the unrest in the village. Investigations are continuing.”

Dineo Thapelo, spokesperson for North West’s Department of Cooperative Governance, Human Settlements and Traditional Affairs, said: “The department has advised the developer appointed to move to another village to resume with works until the matters are resolved to avoid underperformance on the project.”