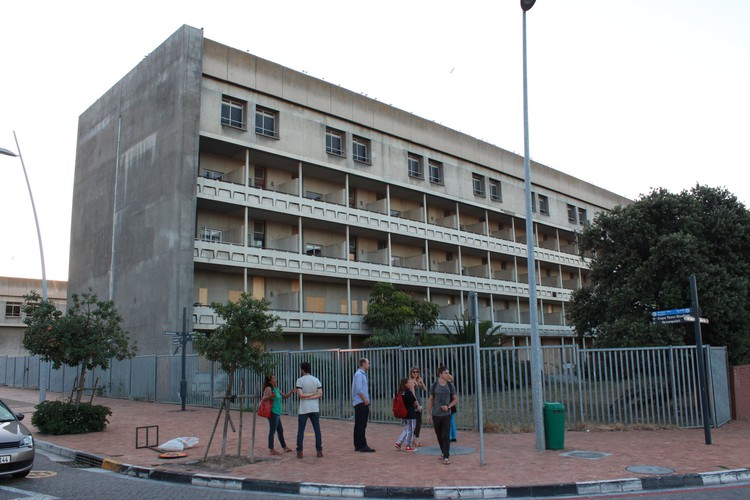 The Helen Bowden Nurses Home has been occupied by Reclaim the City protesters.

Activists supporting the Reclaim the City campaign have moved into abandoned rooms in Woodstock Hospital and Helen Bowden Nurses Home. This comes a few days after the provincial government refused the demand of a long-running campaign to build affordable housing on the Tafelberg property in Sea Point.

The protesters have put forward ten demands. The first two are that the state stops the sale of Tafelberg and builds social housing there, and that plans with timelines be provided for affordable housing at the Helen Bowden Nurses Home and Woodstock Hospital properties.

About half-a-dozen people have been staying at each of the properties since the weekend. By the time this article was finalised on Sunday night, authorities were still unaware of the occupation of Woodstock Hospital, but security personnel were negotiating with the occupiers of Helen Bowden Nurses Home.

Reclaim the City, supported by the NGO Ndifuna Ukwazi, has been campaigning for affordable housing near the CBD for low-income families. Ntombi Sambu who is staying at Woodstock Hospital told GroundUp via WhatsApp: “I live in hell - an informal settlement in Khayelitsha. We are here to reclaim this space, because if the government doesn’t want to build housing for our people, we need to take it.”

Another occupier of Woodstock Hospital who lives in Marikana said: “It’s not safe there for a young woman. I have to wake up in the dark and I’m fed up of travelling to town everyday.”

Both places are a few kilometres from the centre of Cape Town. Helen Bowden Nurses Home is at Somerset Hospital next to the Waterfront. The provincial government describes it as the “Jewel of Granger Bay”. It is considering selling both properties, and in a statement on Wednesday — in which it nixed affordable housing at Tafelberg — the provincial Cabinet said that affordable housing would be included as a condition of sale for Helen Bowden. The statement also suggested that affordable housing would be part of the sale of Woodstock Hospital. The occupying activists, however, have described these commitments as vague.

One of the occupiers told GroundUp that there were many empty rooms in Helen Bowden, fitted with cupboards, sinks and toilets. “Even the electricity works.” Though some of the occupiers also noted that it needs water and “basic” renovations. “They say there’s no alternative accommodation, but this building is already finished,” said Sheila Madikana who lives in Sea Point.

One of the Woodstock Hospital occupiers said: “There are many rooms here. It is disgusting that government sits on good land and good buildings, making empty promises while denying residents their basic rights.” But he also described the place as filthy and derelict. “There are dead birds everywhere. It is used [to film] horror movies.”

GroundUp was provided access to the occupiers on condition we did not inform authorities until the publication of this report at 5am on Monday morning. We will seek comment from the provincial government on Monday.