Treating occupiers as criminals fails to recognise that the vast majority of people are forced to take land, says Ndifuna Ukwazi 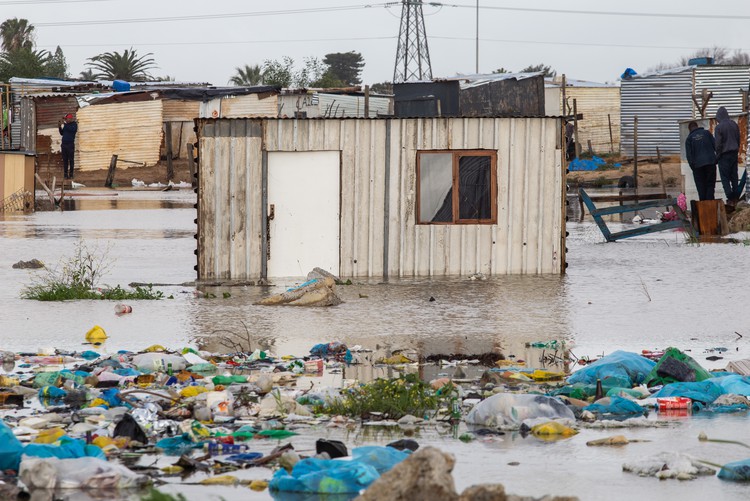 Flooded shacks at an informal settlement in Bloekombos, Kraaifontein, on 1 July 2021. This section of the settlement is named Covid and started growing soon after the pandemic lockdown last year. Archive Photo: Ashraf Hendricks

A petition with more than 8,000 signatures has been sent to the City of Cape Town asking for an extension for more public comment on the Unlawful Occupations By-Law. Signatories reside in Khayelitsha, Langa, Kraaifontein, Philippi, Woodstock, Sea Point and Delft.

Public comments on the draft by-law closed on 31 July.

According to the City, the by-law is expected to “streamline procedures underpinning the effective resolution of complaints, and to mitigate risks to the City, individuals, and landowners, by ensuring that necessary and ongoing enforcement actions that protect land are supported by legislation”.

Housing activists have slammed the draft, saying it seeks to criminalise the occupation of land that could result in a fine and/or imprisonment of between six months and two years. They also believe that the draft by-law in its current form is not consistent with the Constitution and the Prevention of Illegal Eviction from and Unlawful Occupation of Land Act 19 of 1998 (the PIE Act).

Nkosikhona Swaartbooi , of the Social Justice Coalition, said that accessing libraries and sub-council offices is costly for poor families who wish to compile and submit their comments.

“Instead of rushing this process, the City should be engaging these communities on issues like access to basic services,” said Swaartbooi.

In a statement, Ndifuna Ukwazi (NU) said, “The draft by-law is published in a context of rampant spatial inequality, a massive shortage of well-located affordable housing and amid fierce criticism of the deplorable conduct of the City’s anti-land invasion unit and law enforcement officers during unlawful evictions.”

NU said that while the causes of occupations differ and are nuanced, treating occupiers as criminals fails to recognise that the vast majority of people are forced to take land out of need.

Reiterating NU’s stance, the global movement to secure the human right to housing, The Shift, said, “Under the by-law, City officials are provided powers of arrest where individuals seek to occupy public land having been informed that doing so is unlawful. Those convicted of an offence under the by-law are liable to fines or imprisonment, depending on the offence. These provisions amount to the criminalisation of people based on their housing status, homelessness.”

The movement was concerned that under the draft by-law, City officials “can notify those living on occupied land that they must leave their homes. Where such notices are issued, the by-law states that residents should be given the option to voluntarily relocate into a managed settlement”. Those who choose not to relocate will be given eviction notices.

Chairperson of the City’s Safety and Security Portfolio Committee Mzwakhe Nqavashe said there are 54 newly established informal settlement areas to date. “The majority have been orchestrated and are on unsuitable land.”

He referred GroundUp to a City statement which read: “The by-law does not grant new powers to law enforcement, these already exist in national legislation” and that it is in line with the PIE Act.

“The by-law clearly specifies the conditions upon which a structure can be dismantled to protect land from illegal occupation. It states that ‘authorised officials may dismantle the structure and impound the intended occupiers building material and possessions if the structure is on land under the City’s control, on a public thoroughfare, or not yet capable of constituting a home on any other land’.”

Nqavashe said the City was considering the comments submitted last month. “The draft by-law is not retrospective, but certain aspects may be relevant. However, it must be noted that while the period for public comments has closed, the process is nowhere near completion,” he said.