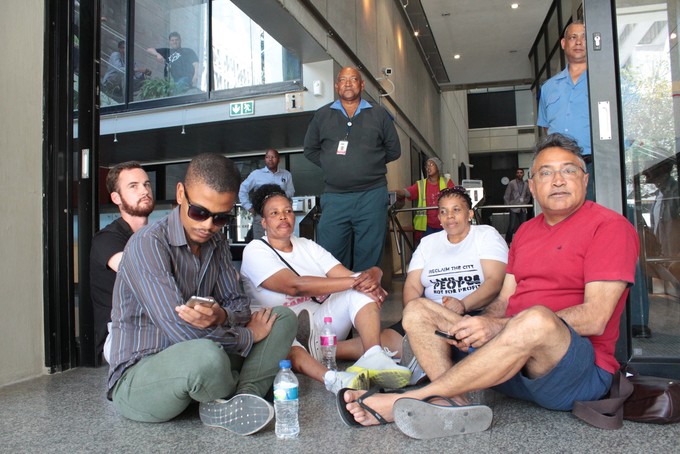 Several activists from Ndifuna Ukwazi and Reclaim the City sat in at the Department of Transport and Public Works building in Dorp Street today, blocking access to the building for about two hours. The organisers demanded a meeting with Thiagaraj Pillay, the Western Cape Government’s Chief Director of Public-Private Partnerships, to discuss the publication of the affordable housing feasibility study for the former Tafelberg School site in Sea Point.

On 3 November, Pillay sent an email to Ndifuna Ukwazi Law Centre explaining that the delayed but required consultations with the Social Housing Regulatory Authority were completed at the end of October and the feasibility study would be published by 11 November.

After the missed deadline, activists went to Pillay’s office to discuss publication of the report, after failing to reach him via telephone. According to Emile Engel of Ndifuna Ukwazi, an organiser at the scene, the police confirmed that Pillay was in the building but refused to meet with them.

At approximately 1pm, Pillay sent a letter via email to representatives of Ndifuna Ukwazi explaining that “the translations of the notices to be published as well as … the financial model in question has taken us more time to finalise than was initially anticipated when we last wrote to you on this matter. This process has however now been finalised … and the notices are being sent to the media houses concerned for publication. You have our assurances that we are working as hard as we can to get this process finalised and that the recent delays will be accommodated in the time period which is being given for comment.”

In response, Engel told GroundUp that it was a problem that this letter did not come immediately after the missed deadline, but only today, after Ndifuna Ukwazi Law Centre approached Pillay’s office.

Michael Mpofu, spokesperson for Premier Helen Zille, accused Ndifuna Ukwazi of being “disingenuous”. Referring to Pillay’s letter, he said the organisation was aware that the government was “publishing a notice calling for public comment on the proposed financial model”. He said: “Once the notice has been published, they are – like anyone else – free to engage with the document and make their submissions.”