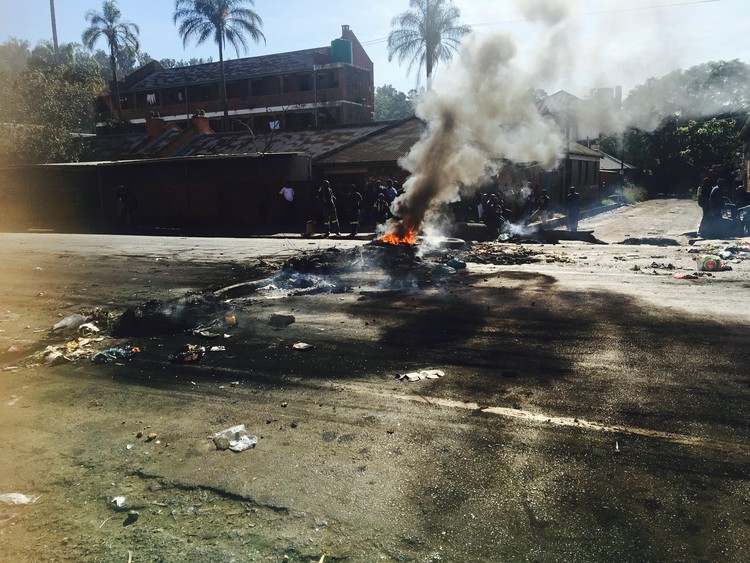 Residents of East Street hostel barricaded the road on Wednesday complaining that their water and electricity had been cut off. Photo: Nompendulo Ngubane

Residents of a hostel in East Street Pietermaritzburg barricaded the road with burning tyres on Wednesday, angry because their water and electricity had been cut off.

On Tuesday night the residents marched to the city hall demanding to see Msunduzi mayor Themba Njilo. Some were naked to the waist, brandishing sticks and singing. They burned tyres, rubbish and wood and blocked streets.

The 300 men who live in the hostel are complaining about bad living conditions, rubbish which has not been collected for years, leaking water pipes and broken toilets.

“The protest was prompted by water and electricity cut off on Tuesday,” said resident Bongo Ngubane.

Ngubane has been living in the hostel for 22 years. He said it is not the first time the municipality has cut off water and electricity services.

“They did that without telling the residents. We went to the city hall on Tuesday night. We wanted to see the mayor. All we wanted was for him to explain and restore water and electricity. In the morning we decided that we should close the road. We can’t leave without water and electricity. There is food in our fridge which will be off. They should have told the hostel committee. No one was informed about the cut off,” he said.

Ngubane said they had been paying R9 a month to the municipality until 2006.

“In 2006 we were told to stop paying. Since 2006 we have been living like pigs. There are broken windows. The whole hostel smells. There are leakages in each and every block. We breathe and smell dirt. The rubbish has not been collected for years. We did not stop paying because we could not afford. … We wake up and go to work. There is no way we cannot afford to pay for electricity,” said Ngubane. 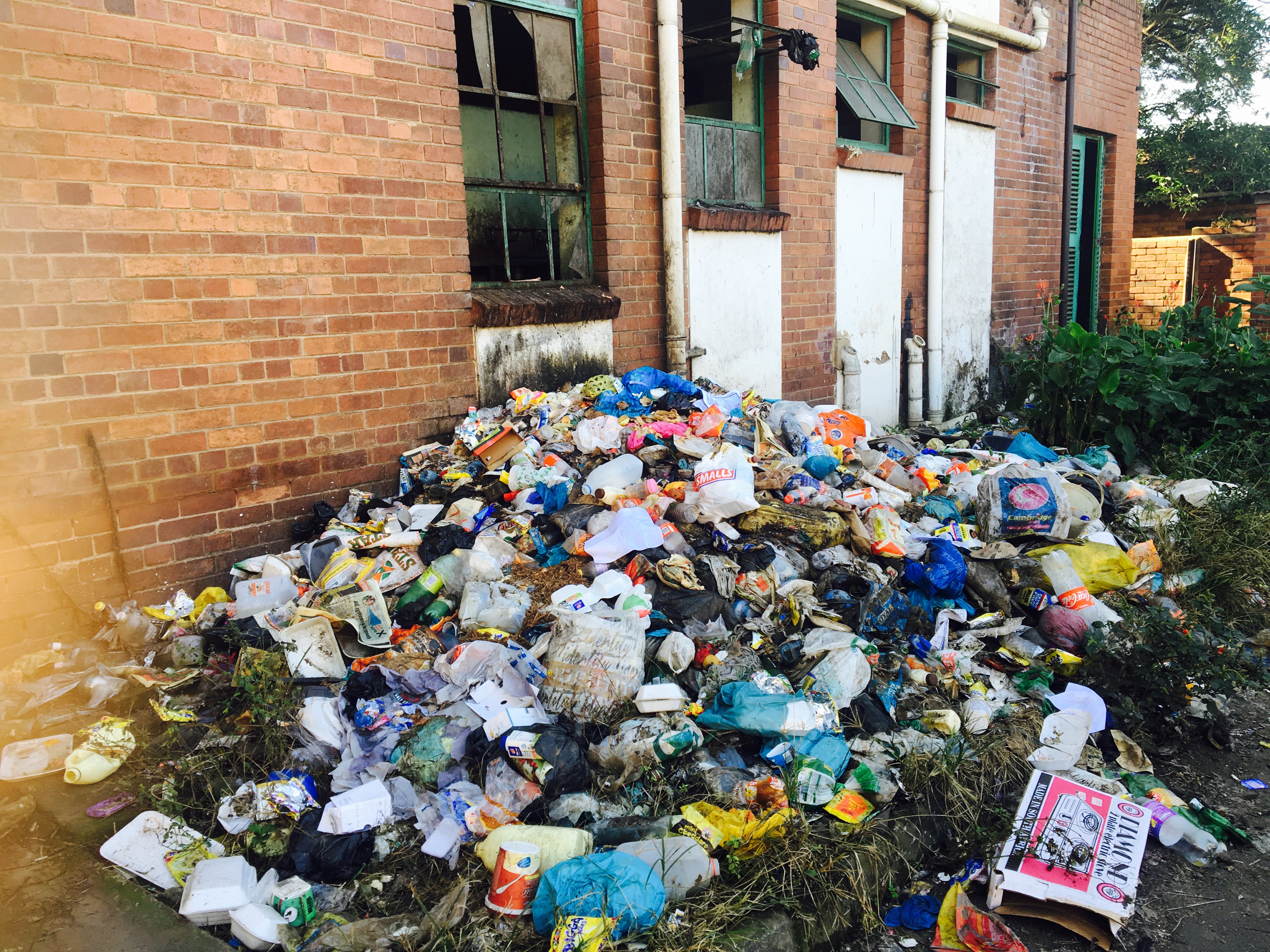 Rubbish has piled up in the hostel. Photo: Nompendulo Ngubane

Mzwakhona Dlamini, who heads the hostel committee, has lived there since he was 18. His home is at Qanda in Elandskop.

“We have no security. There are no cleaners. They have deserted this hostel. It looks like a pigsty. None of the geysers are working. There is no safety at all. I can’t even bring my family to visit. I’m sharing my room with other six men. Some people are using the hall to sleep,” said Dlamini.

He said residents felt neglected, especially after casting their vote. “Look at our thumbs. We voted, hoping that we would have a decent living. The living conditions are not those of human beings,” he said.

Bongangezonzo Ngcobo said his brother had been killed on his way to the hostel. “Safety is a concern. Our cars are broken into.”

“Currently we can’t flush toilets. There is no water. We are hungry because we can’t cook,” said Ngcobo. He said some of the men were sharing rooms with ten other people.

Mayor Njilo said the building belonged to the Department of Human Settlements which owed the municipality R200,000 for services. The municipality had cut off electricity and water to recoup what was owed.

He said he had not wanted to meet the men last night because he was afraid of them.

The municipality and the department had held at meeting and arrangements had been made for payment. “We have restored electricity and water,” said Njilo.

“They are not the only residents who have experienced cut off for water and electricity. All those who are owing will have their services stopped,” said Njilo. He said in total the municipality was owed R3 billion for its services by residents.

Department of Human Settlements spokesperson Mbulelo Baloyi confirmed that payment arrangements had been made.

He said the department was aware of the bad conditions of the hostel.