The City has committed to including them in recycling efforts, but activists are sceptical 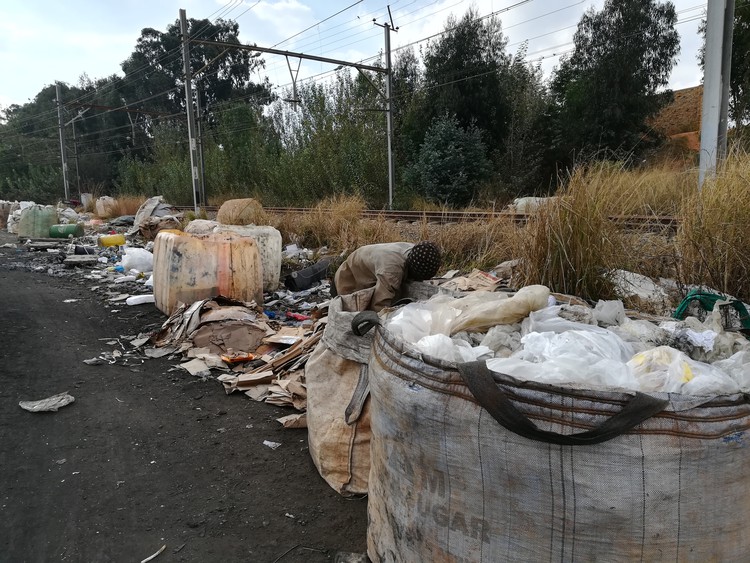 McLean Banda, a waste picker who lives in the informal settlement next to Genesis Landfill in Central Johannesburg, sorts his recyclable materials. Photo: Zoë Postman

At a press briefing on 27 June, Nico De Jager, the Mayoral Committee Member responsible for environment, said that the City of Johannesburg is looking into providing registered waste pickers with gloves, trolleys and inoculations to ensure they are included in the City’s recycling initiatives.

The press conference was held at the offices of the City’s waste management company, Pikitup.

De Jager urged waste pickers to organise as a collective and register with Pikitup. “We are not forcing them to register but it would make it easier for us to monitor and regulate if there are groups rather than individuals.”

But Vanessa Pillay of Women in Informal Employment, Globalizing and Organising (WIEGO), is sceptical. She told GroundUp that she had meetings with Pikitup last year to discuss ways to formally include waste pickers but nothing has been done since then.

“It has become clear to us that the City is deliberately excluding waste pickers because they don’t recognise waste picking as real work … They seem keen to include the workers but then nothing is done thereafter, so it’s this constant back and forth,” said Pillay. “In the meantime, the City is going ahead with its recycling initiatives without informing or including the waste pickers.”

Managing Director of Pikitup, Lungile Dhlamini, admitted that Pikitup had not been meeting with representatives of waste pickers as often as it should have but promised to make regular meetings mandatory going forward.

Pikitup’s communication manager, Muzi Mkhwanazi, said there is a need for waste pickers in the City because 90% of waste is still deposited in landfill sites and only 10% is recycled. He said waste pickers help divert waste away from landfill sites by collecting recyclable materials from households as well as the City’s landfill sites.

About 70 other waste pickers live in an informal settlement next to Genesis landfill site in Central Johannesburg. The landfill is managed by a multinational waste management company called Averda who took over in 2015.

Averda applied for an interdict at the Johannesburg High Court in early June to prevent the waste pickers from entering the landfill. Averda’s Communication Manager Martin Slabbert-Capper said the interdict was to stop the recent violence, theft and damage to property by waste pickers who gained unauthorised entry to the landfill.

The waste pickers say Averda is preventing them from entering the landfill to get recyclable materials. “They [Averda] don’t see us as human beings contributing to the City and helping the environment by recycling … All they see is dirty people who must be moved away,” said Mduduzi Dube, one of the waste pickers.

He said there had been a verbal agreement with the previous owners of the landfill that allowed the waste pickers to sort through the waste for recyclable materials and sell it.

He said for the past year and a half, the waste pickers have had to go into the landfill in the evenings once the security guards left.

Another waste picker Christopher Sedze has lived in the settlement for 20 years and supports his three children and wife. “It is so painful because this [waste picking] has been our livelihoods for so many years and now things are changing … How do we explain this to our families? We moved here to provide for them and now we can’t do that anymore,” he said.

“All we want is to be able to work at this landfill like we worked in the past…We don’t want to be criminals who steal from others to survive. We just want to recycle,” said Sedze.

WIEGO and the Socio-Economic Rights Institute (SERI) managed to get Averda’s interdict postponed until the case is heard on 16 July.

On 20 June, the Red Ants demolished the waste pickers’ shacks.

Nazi Makamu, another of the waste pickers, said they asked in vain for an eviction order. GroundUp was unable to establish who organised the eviction.

Spokesperson for the City, Luyand Mfeka, said the land is not City-owned and therefore has no jurisdiction to order an eviction.

Slabbert-Capper said that Averda “cannot comment or provide any clarity on what has transpired outside of our Genesis landfill site, but would like to add that we hope for a peaceful solution to the situation”.

The Red Ants did not respond to GroundUp’s questions.