Community-built Dunoon barrier fails to save people from winter floods 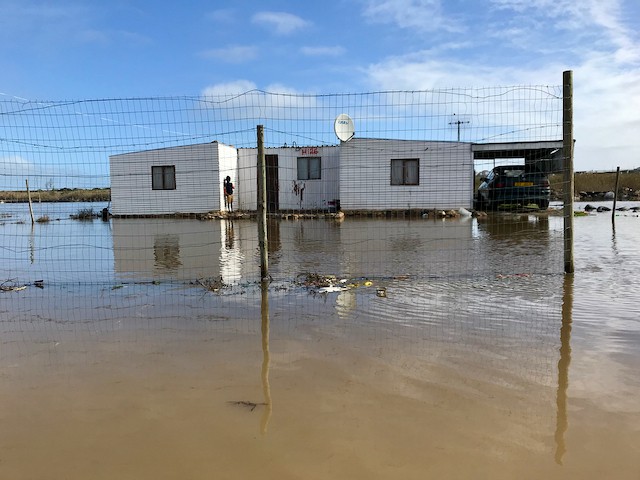 A home in the Diep River floodplain engulfed by water on Wednesday. About 400 homes were flooded when the river breached its banks. Photo. Peter Luhanga

A flood control barrier built by the Dunoon community using tyres filled with gravel failed, after heavy rains this past week caused the Diep River to breach its banks on Wednesday. About 400 homes were flooded according to a community leader.

Residents had built the barrier after experiencing floods last winter. Viziyalo Madolo, chairperson of the area community leaders, initiated its construction. On Thursday, his and other residents’ homes were partially submerged in water and people had to wade in Wellington boots.

Although disappointed that the barrier did not stop the winter floods, without it the “floods could have been worse” says Madolo. This year, only his bedroom was flooded.

“We feel disappointed and neglected for not receiving any support [from government] for our efforts,” he said.

“We have nowhere to go,” said Madolo. “We were not part of the struggle that fought [with authorities] to invade this land … I paid R3,000 for my plot. Every one of us in this section bought this land at different prices ranging from R3,200; and further away from the floodplain people bought the land for R7,500.”

“We don’t want free houses. We want serviced plots and we’ll build our [own] houses,” he said.

Mayco Member for Safety and Security JP Smith said on Tuesday that the majority of the reported flooded areas are situated on land that is not suitable for habitation.

He said “more than 70% of the newly occupied areas, mostly as a result of organised large-scale unlawful occupation since the start of the 2020 Covid-19 lockdown, have been created on unsuitable, flood-prone land, dams and water retention ponds. The City has been communicating that it expects quite a high number of flooding incidents this year due to the spike in unlawful occupations that have occurred”.

The flooded area is private land occupied in 2019 by people unable to afford rentals in Dunoon town.