By Lucas Nowicki and James Stent 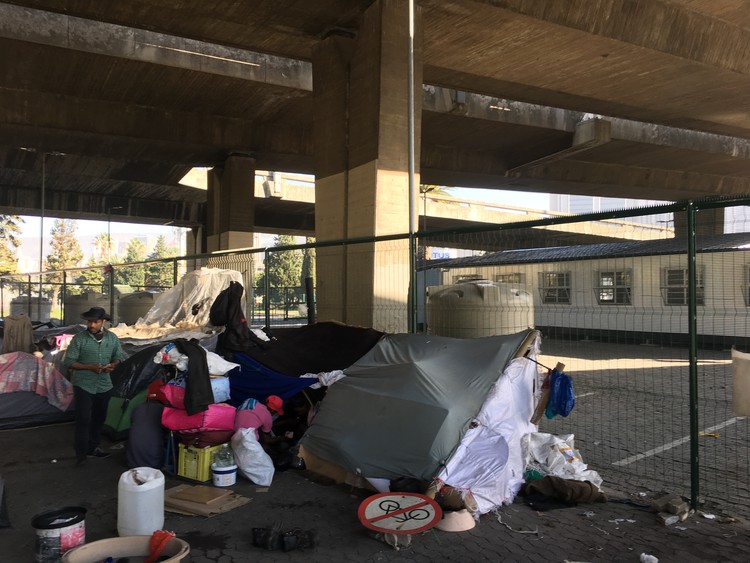 A group of about 30 homelss people are sleeping next to the incomplete City of Cape Town Culemborg shelter site in the hope that they will be first in line when it opens. It is not clear when the site will be completed. Photo: James Stent

The City of Cape Town says that Culemborg homeless site, expected to house about 100 homeless from the recently closed Strandfontein shelter, is not yet ready to welcome occupants.

We spoke to a group, the Strandfontein Homeless Action Committee, who say they represent the interests of homeless people who were moved to Strandfontein at the start of the lockdown. The Committee accused the City of breaching a draft order issued by the Western Cape High Court on 21 May. Part of the order states that the Culemborg site should “be ready no later than the 31 May”.

Mayco Member for Community Services and Health, Zahid Badroodien, blamed the delay on the “large group of homeless individuals who chose to move back to the city after the closure of Strandfontein”. He said that the group made it “physically impossible to access areas where work was to be done which delayed the project”.

He said, “Ongoing underground work … to connect water electricity and sewage services has necessitated an additional delay in its opening.”

It is unclear when these services will be installed.

We visited the site on Thursday. The prefabricated structures inside the site appeared to be complete but there was no one at the site. Outside the gates to the site, we saw between 30 and 40 people living in tents.

According to those living there, there had been no work at the site for days. There had been two portable toilets installed across the road from the site, but the City took it away a few days back.

We were told that this group is remaining at the site, despite there being no services, hoping to be first in line when it opens.

Kevin Pillay was one of the 33 people listed in the draft court order who needed to be isolated after coming into contact with someone who had Covid-19 while at the site in Strandfontein. Pillay said he and those he was with were taken to a hotel in the CBD, and released after four days.

On 22 May, the last remaining 180 occupants of the Strandfontein homeless shelter were dropped off as per their request at an unserviced highway overpass in Culemborg central in Cape Town. The group said they chose to stay there expecting the shelter to be completed by the end of May.

Over 150 of the former Strandfontein shelter residents are currently being housed at the offices of Community Chest in Bree Street.