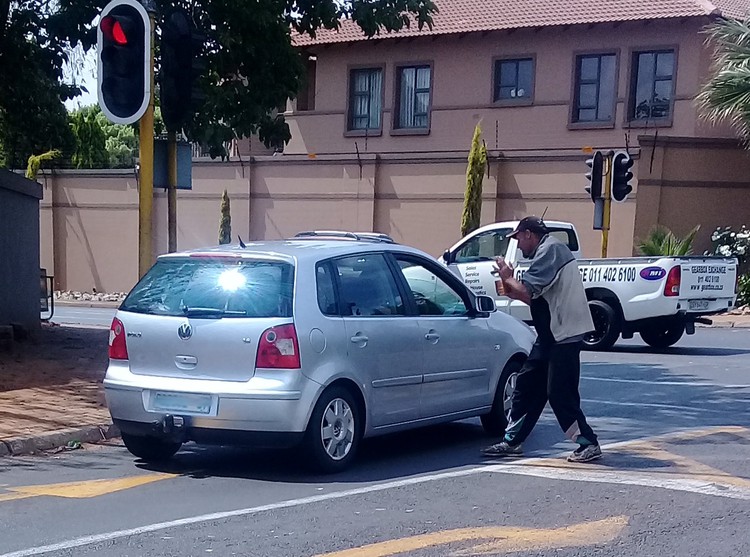 Warren Roman, well-known to motorists passing through Bedfordview intersections, said the loss of his mattress, blankets and some clothing was one of several “cruel blows” he has suffered recently. Archive photo: Ian Broughton

In Johannesburg’s affluent East suburbs, homeless people are under pressure from local government and the private sector. According to several people living on the street, property development and urban renewal are to blame.

In Bedfordview over the past few months homeless people have had their bedding and possessions confiscated, been subjected to verbal harassment and threatened with arrests, fines and assault. One homeless person told GroundUp the metro cops had even tried to solicit money from him.

Homeless people we spoke to say they have stood their ground against anti-poor policies and sentiments for many years, including mass removals from the streets and illegal arrests. Last year, there was a public protest by Ekurhuleni residents wanting beggars out.

Beggars at traffic lights in Bedfordview were in the spotlight recently. A front page story of a local knock-and-drop newspaper announced the launch of a Twitter campaign urging residents not to give money or food to beggars.

A member of the Bedfordview Community Policing Forum (CPF) also made claims in the article that associated some of the homeless with criminal activities, including involvement with “child beggar syndicates” and the renting out of children as “sympathy tools”.

One homeless woman told GroundUp she was stunned to hear these stories. She insisted the child with her, who was blind, was her child and not a child she had rented as a “sympathy tool”. The woman has since disappeared after social workers stepped in.

Launched by the local CPF, the Edenvale branch of Child Welfare South Africa, and some local residents, the campaign was sparked by comments on a social media site about a beggar at a Bedfordview intersection allegedly hitting a young child.

This social media furore came soon after Ekurhuleni Metro Police operations targeted homeless people and the CPF renewed its own efforts as did private security firm Night Guard and certain residents to rid the area’s traffic intersections of beggars.

“Not everyone is against us. There are still kind and generous people out there who we really appreciate, but there aren’t too many and they seem to be getting less,” said 41-year-old Warren Roman.

He and about a dozen other homeless people endured several freezing nights after metro police raided an abandoned building in Rhodes Park, not far from Bedfordview, where the homeless had been sleeping. Metro police confiscated bedding and other possessions including clothing, toiletries and medicines.

“Some of us don’t even have a single blanket. I didn’t sleep much and every morning my feet felt like ice,” said a man who identified himself as Shibowa.

Rhodes Park has been home to immigrants and South Africans of all races for about a year.

Roman, well-known to motorists passing through Bedfordview intersections, said the loss of his mattress, blankets and some clothing was one of several “cruel blows” recently.

Roman said he was the target of a social media campaign last year. “Nothing said in that post was the truth and I could prove it. Yet, a so-called community leader gets to say anything he wants, misleading the public.”

“We are being made to look as if we are a danger to the community or something, or else the scum of the earth. They keep talk about begging syndicates and other nonsense … I’ve already noticed a negative effect on people. I even get looks from some people as if I have had burned down their house or something,” he says.

A Mocambique hawker who sells his own paintings of African wildlife and scenery on the roadside, said metro police confiscated his paintings and told him he was not allowed to sell them at the intersection. He says that when he went to try and get his works of art returned, he was told to pay R800.

A Zimbabwean woman who sells Homeless Talk at the Nicol and Van De Linde intersection, says she has been told several times to go away by metro police. On one occasion, she says, metro police ordered her to get into their vehicle and they drove her several blocks away. They told her it would be “a lot further away” next time.

“I have been here for three years. Everyone knows me. They must take me to the police station; even the police know me. I have a permit to be selling here,” she said.

Security firm Night Guard was instructed by Bedford Centre management to clear the intersections near the centre. Homeless people say they were sworn at and threatened with assault by the security company guards.

Metro police spokesperson Inspector Kobeli Mokheseng said, “Hawkers, beggars and other homeless people are members of the community and if they do not abide by the rules, we will throw the book at them. We will continue to enforce by-laws on a daily basis in the City of Ekurhuleni.”

“Any person illegally invading a vacant building, that could contribute to harbouring criminals or suspected to be performing illegal activities, shall be evacuated from that building,” Mokheseng said.

Mokheseng urged anyone who witnessed metro police behaving in an unprofessional manner, including harassment, intimidation or verbal or physical abuse, to phone the call centre on 011 458 0911.

Night Guard and Edenvale Child Welfare did not respond to our queries.