Homeless in city ask society to change its ways 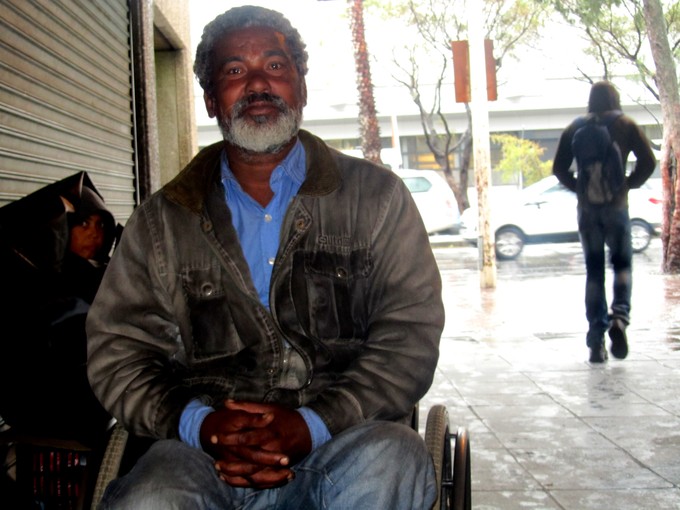 Winston Nicholas has been on the streets for more than 20 years. He says law enforcement officers have kicked him. Photo: Bernard Chiguvare

“They kick us, take away blankets and all our possessions and we never get these back,” says Winston Nicholas who has been on the streets for more than 20 years. He accuses the authorities of conducting raids on the homeless as late at night as 11pm and as early in the morning as 4am.

Chantal Wilkinson, who has been living on the streets for four years since her home in Manenberg burned down, says law enforcement took away her ID document, her mother’s pension card and the blankets and bedding she was using. When GroundUp spoke to her she only had a red blanket for warmth.

Another homeless man, who sleeps at the Golden Arrow bus terminus in the CBD and gave his name as Nicholas, says he too has been ill treated by law enforcement several times. “People donate food and law enforcement come and take the food parcels away. One time, law enforcement took away my ID book and I never got it back,” he says.

Dean Ramajoomia, who formed The Nehemiah Call Initiative, a faith-based movement to galvanise support for the homeless, put together a list of demands and gathered 298 signatories. On Monday, they marched to the office of the Mayor of Cape Town to hand over their concerns.

Mayoral Committee Member for Safety and Security Alderman JP Smith says law enforcement is not allowed to remove an individual’s personal possessions, but only materials used in the construction of makeshift structures or any litter the homeless leave behind. Any goods taken are meant to be retained at the City pound. Smith says abuse by law enforcement should be reported to the police or to the heads of law enforcement.

The marchers want the DPU (Displaced People’s Unit) and CCID (Central City Improvement District) security officers investigated for abusing the homeless, and the Mayor to find out what happens to the food and belongings once confiscated.

The petition implies that under the cover of crime-operations, the homeless are being victimised; that SAPS is not protecting the homeless, but co-operating in the enforcement of City bylaws.

It asks for the homeless not to be removed or displaced until there are an adequate number of shelters.

The petition says the homeless should not be excluded from getting jobs in the Extended Public Works Programme. It also asks ratepayers to demand that their rates and taxes not be used to fund operations that displace and marginalise the homeless and define them as “undesirables”.

Raajoomia says the City and the Department of Social Development need to look into communities such as Netreg and Valhalla Park where social conditions are so bad that many of the City’s homeless stem from these areas. Government agencies need to make sure minor children that drop out of school are reunited with their families and not left on the streets where they fall into a “sub-culture of drug use and sexual exloitation”. Magistrates and prosecutors need to look at alternative sentencing instead of prison, he says. He says claims petty, repeat offences by people on the streets often stem from the long delays in getting people into rehabilitation faciltities.

“Yes, some homeless people are reintegrated with their families but six months down the line you again find the same people back in the streets. They [the City] need to work closely with the social workers for a permanent solution,” he says.