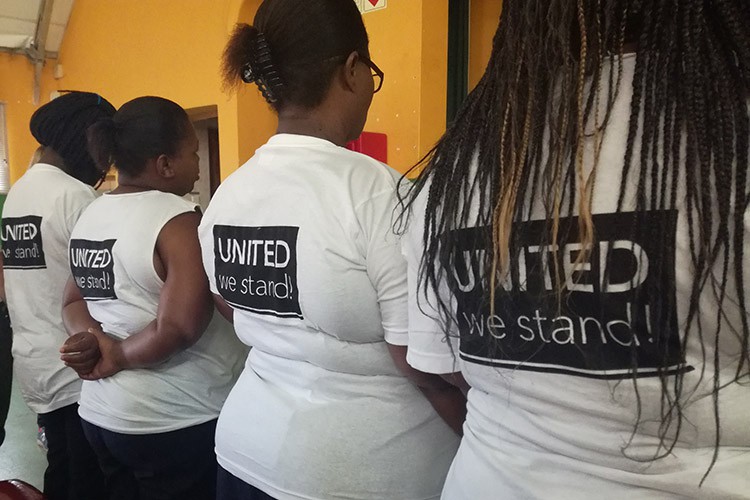 Nearly a year after their offices were burgled and vandalised in New Crossroads near Nyanga, a group of community health care workers are still “clocking in and out” under a tree in the area. They no longer have proper offices, and therefore report to their supervisor outside. This is just one of the concerns raised by the workers.

They are home-based carers. This means they travel to the homes of patients they look after.

“We want to tell our story so people can know what’s happening. It’s time for government to notice us. No one cares if we’re okay as long as the work continues,” said one of the workers. The workers, who are employed by SACLA Health Project, work from 8:30am to 1pm on weekdays and earn R1,800 per month.

SACLA board member Dumisani Ncapayi told GroundUp that the board had an urgent meeting to discuss the concerns raised by the workers. “The board has been in the process of stabilising the programme where there have been different challenges which included the burglary of the building. This has led to care workers working from awkward situations,” he said.

In April, GroundUp attended a community awareness event hosted by the Sustainable Livelihood Foundation where some care workers spoke about their day-to-day challenges. The main concerns were low wages, lack of equipment, safety while on duty, and job insecurity. At the time, the care workers had been working for weeks without having signed new contracts to confirm their employment.

Describing her daily routine, Fos said: “As a careworker, I walk in the rain or heat from house to house to wash people, give medication and end up doing more than we should. Sometimes we have to walk alone, and as a woman it’s not always safe here during the day.”

“We go into the houses alone, not knowing what we’ll find. We usually get one pair of gloves to use for the whole day. This means that sometimes we have to wash and change patients who are in nappies with our bare hands,” she said.

Jill Black, of the Sustainable Livelihoods Foundation, said they were introduced to the care workers last year. “They were in the midst of a protest around their working conditions. They work very long hours without extra pay. We worked with 11 of the carers who had come to a point in their careers where they’d had enough,” she said.

The Western Cape Department of Health’s deputy director of communications, Mark van der Heever, told GroundUp that the concerns raised by workers were “between employee and employer” and that the Department did not get involved in disputes of this nature as SACLA was “contracted [by the Department] to carry out the services”.

Most of the doors, windows, and piping in the organisation’s burgled offices in New Crossroads have been removed. The care workers said that the buildings have remained vacant since last year. They also said that they felt victimised by SACLA and community leaders.

Two workers we spoke to said that recently they had a patient with a rare skin disease and were forced to buy their own gloves to treat him. “It was smelling and every time you touched it, white pus would come out,” said one of them. “I get very emotional when I talk about my job because we want to help the community, but we are being treated badly. I collect patient’s medication at the clinics with a big box and walk with it from house to house. I’m so scared the skollies are going to rob,” she said.

Following several emails and phone calls by GroundUp to SACLA management, the workers were given three-month contracts on 3 May. The contracts, seen by GroundUp, are dated 1 April to 30 June 2017. This despite claims by SACLA that they have offered workers a six-month contract.

SACLA’s Ncapayi said that the board had signed a new agreement with the Department in order for services to continue. He added that equipment and tools would only be given to workers after they have signed the new contracts. “We agreed on new contracts starting from 1 April 2017 for a period of 6 months,” he said.

After GroundUp’s communication with SACLA, the workers were contacted and told to submit their CVs and were reprimanded for “making trouble” by speaking to the media. Although the workers initially wanted to oppose the request by SACLA, they have since decided to comply in fear of losing their jobs.

A care worker who asked not to be named said they were worried about being victimised for speaking out. “What will happen to us after June? Will we still have our jobs?” she said.