“How can I work without my asylum?” 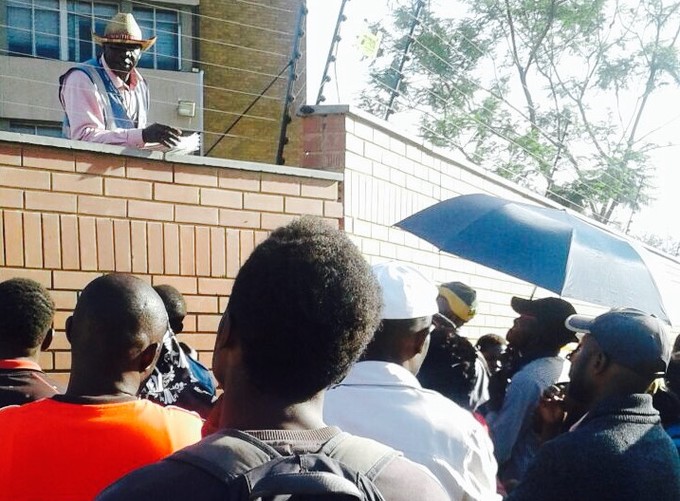 Peter, 33, wakes up at 3am to catch the train to the Marabastad Refugee Centre in Pretoria to renew his permit which expires this day. He lives in Tsakane 80 km away.

At Brakpan Train station he manages to catch the 4am train. He arrives at 5am at Bosman station in Pretoria, and decides to walk the remainder of the way to the refugee centre, meeting fellow refugees along the way.

Peter waits for the “bin” in which he can place his expiring document, so that it can be renewed. The bin is a large box which officers at the Marabastad introduced earlier in 2016. Its purpose is to ease the pressure of having to deal with thousands of refugees on a personal level. Peter and other refugees wait patiently. Those like Peter who arrive early have a chance to throw in their permits first. This makes it possible for the early birds to be served first. Just before 8am, the bin is brought out.

The refugees take turns to put their asylum papers in. The first renewed papers are called out at 11am. The officer stands inside the the wall on a high pillar. Facing the crowds outside. On calling out a name the owner raises his or her hand while others pass the permit on: Congolese nationals on the left and Zimbabwean nationals on the right.

But Peter’s name is not called out. His document is missing and so are the papers of about 30 other people. They stare at the wall hoping that the officer will appear with their papers. It is already 4pm and closing time. What could have happened to the other papers, they ask each other in confusion.

“I am very disappointed by this situation. How can the officers not know what happened to my permit when I put it inside the box. Everyone saw me. It’s not easy to travel early in the morning all the way from Tsakane all for nothing,” says Peter. “I borrowed money from my friend to come here. Coming back again is out of the question. And how can I work without my asylum?”

The dozens of refugees whose papers disappeared on this day are amongst many others who came on different dates - a witness, a nearby food vendor, estimates the number at 200.

The officials who call out the names on permits claimed that the submitted papers were not inside the Home Affairs building. The officers suggested that asylum seekers whose permits were not called get an affidavit signed at a police station. On this affidavit they need to explain what happened and write their file numbers to enable their permits to be reprocessed.

Some refugees report that their files were said to have been moved to other branches due to a backlog at this centre. They say they have managed to get their papers back on subsequent dates.

But not everyone gets their papers back, at least not quickly. One woman says: “I have been coming for two weeks now and nothing. They cannot find my permit inside.” She travels from Elandsfontein and has to carry her child on her back. “Travelling with a child early in the morning and spending the whole day standing is not easy,” she says. “Yesterday an officer wrote our names down saying they will check for us. But today again they haven’t found anything. I really wonder what is going on here. Police arrest us if we do not produce our asylum permits. What if they decide to arrest me when I go and make an affidavit? I cant risk it,” she says.

A security guard at the centre says it is “hectic” inside. He says the increasing number of asylum seekers is making the workload “a bit too much”, resulting in the loss of documents. “Worse still the machines for printing asylum papers are always offline. Honestly you can’t blame them,” he says.

“Maybe it would be better if they decentralised the duties of the refugee center to other Home Affairs centres around the country. It should ease the pressure here at Marabastad,” he says.

There is additional pressure on Marabastad because of the closure of Home Affairs facilities to process asylum seekers in Port Elizabeth and Cape Town.

There are also rumours that fraudsters steal asylum papers from the box, so that they can sell them back to the owners, claiming that they found the papers lying around.