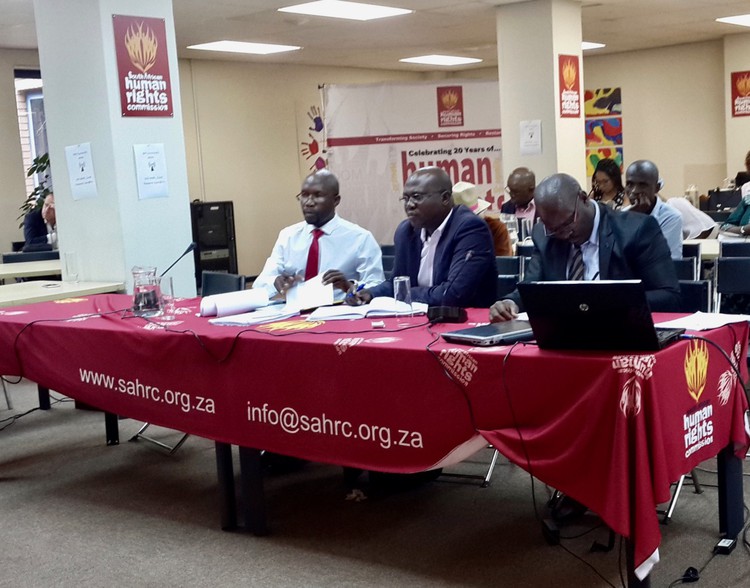 The Department of Home Affairs says most refugee status appeals are not from people fleeing war torn countries for safety, but are made by young males seeking better economic opportunities.

Home Affairs Director of Asylum Seeker Management Mandla Madumisa and Advocate Maemo Machete were addressing a two-day hearing by the SA Human Rights Commission (SAHRC) in Johannesburg on Thursday. The hearing is into the causes and effects of xenophobia on South Africans and immigrants.

“The denial rate is so high that you have to have retracted and extended appeal processes … Would you not save yourself [Home Affairs] capacity if you just increased the approval of appeals?” Freeman asked Madumisa.

Madumisa told GroundUp that the “96% rejection rate” referred to “asylum seekers who had already said they were in South Africa for economic purposes”. He said Home Affairs could not grant them refugee statuses based on such a reason.

Madumisa said asylum seekers from Ethiopia, Bangladesh and West Africa were mostly males between the ages of 19 and 36 seeking economic opportunities.

But Madumisa said Home Affairs had a backlog of about 140,000 appeal cases and many legitimate appeals were currently stuck in that backlog.

Freeman asked Madumisa whether Home Affairs knew about the high levels of corruption at the refugee centres and what it was doing to stop this. She said out of her many focus groups with immigrants, only one immigrant said he did not have to pay a bribe for his refugee status. She said the minimum cost was around R2,500.

Madumisa said he was aware of the corruption because he experienced it every day. “Clients [immigrants] walk into my office and I ask them what they need help with and their first response is to put R500 in my hand,” he said.

Madumisa said he tried opening cases with the South African Police Service but nothing was ever followed up. He said Home Affairs had amended the Refugees Act to include polygraph tests, lifestyle audits and competency tests for all Home Affairs employees.

Madumisa said Home Affairs was open to further engagement with SAHRC after the hearing to see where it can approve in protecting refugees in South Africa.