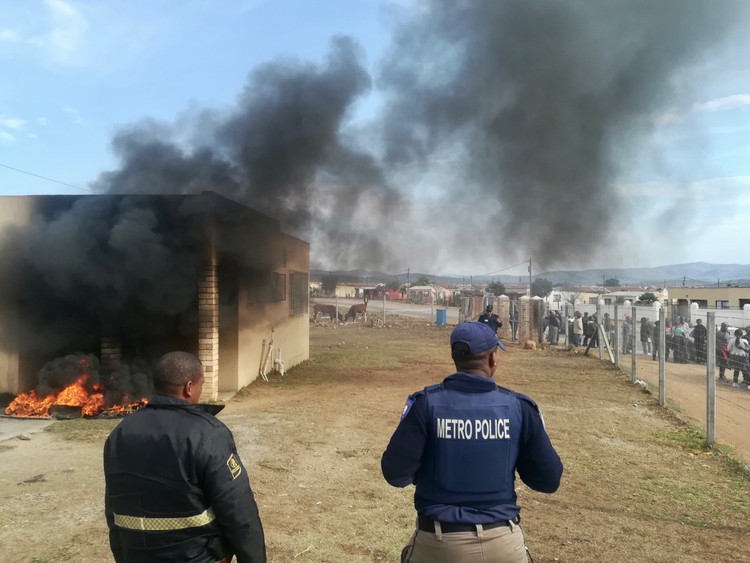 Tyres were burnt in front of the door to the office of ANC Uitenhage Councillor Siphiwo Plaatjies. Photo: Thamsanqa Mbovane

Protests erupted on Tuesday after a “teagirl” was employed at a sewer pipe installation project in Gunguluza, Uitenhage.

Angry residents arrived at the construction site where Power Construction is busy with a R29-million tender project for a sewer. “We want you out now!” people shouted at the “teagirl”. Another resident shouted at the woman: “Your employment is illegal. You are fired!”

“I just wish I can get out of this site once and for all to avoid this drama,” the woman told GroundUp while management tried to negotiate with the angry protesters. The woman asked for her name not to be used.

When residents dragged out a mattress, the woman shouted, “No! Don’t burn things in my name, please … I will get out of the site peacefully.”

She was then escorted out through a back gate by her boss, Wayne Haggard.

Residents said the woman was employed last Friday without proper community consultation. They said she was employed on the orders of Councillor Siphiwo Plaatjies (ANC) and not through voting district committees, which is the norm in the area.

Protest leader Martin Mathews said, “We heard that the teagirl had been phoned by a man at the councillor’s office who gave her the job … Her employment was invalid.”

Plaatjies said, “I have always distanced myself from recruitment processes in my ward projects.”

Haggard said people were employed by the company through the community liaison officer, Babalwa Dyalivane, informing the office of the councillor when positions opened.