A review of the bylaws is to be heard in February 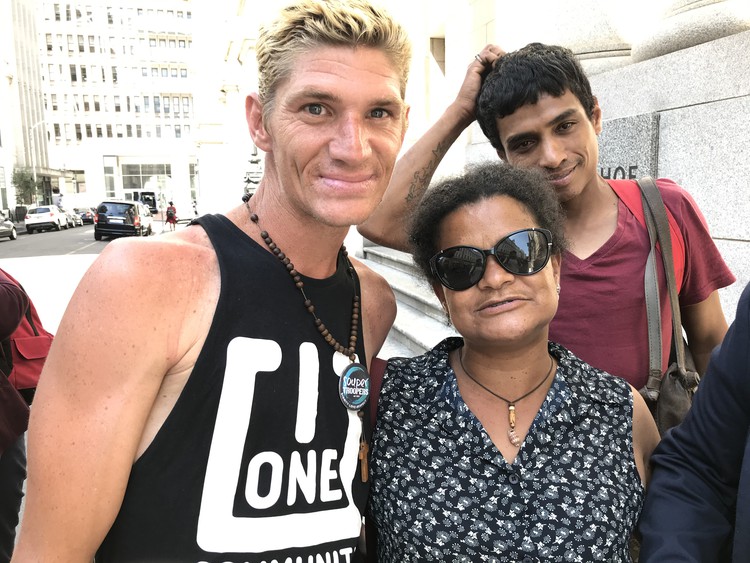 The Western Cape High Court on Thursday reinstated an order first made on 5 September which prohibited City of Cape Town authorities from fining and confiscating property belonging to people living on the streets.

The order, initially granted by Judge Lee Bozalek, also prohibits the City from harassing or abusing homeless people. The City was also barred from prosecuting the fines levied against the seven homeless people who are applicants in this matter. These fines were issued under the 2007 Streets, Public Places and the Prevention of Noise Nuisance, and 2009 Integrated Waste Management bylaws in respect of homeless people.

On Thursday, Acting Judge Martin’s decision to extended Bozalek’s interdict came as a surprise to lawyers representing the City, Gardens Neighbourhood Watch and Sea Point Ratepayers Association who earlier had already agreed to a reduction in the reach of Bozalek’s initial order.

The parties had expected that Thursday’s hearing was to settle what was initially an urgent application to apply for an interdict against the City, pending a review of the bylaws. But when the parties presented their agreement to Martin, he said that it did “not meet the overriding interests of justice.” He said courts were not there to merely “rubber-stamp” what the lawyers had agreed to.

Martin then ordered Bozalek’s order to be extended in its entirety pending the outcome of review proceedings.

Advocate Johan de Waal SC, for the ratepayers supporting the City, objected to the ruling, arguing that making a different order to the agreement provided to the court, was procedurally incorrect.

Meanwhile, two weeks after Bozalek’s order against the City, the seven applicants brought an urgent application to have Mayor Dan Plato and JP Smith as Mayoral Committee Member for Safety and Security, charged with contempt of court.

The applicants, represented by advocates Nick de Jager and Adiel Nacerodien, instructed by attorney Lucien Lewin — all of whom are working pro-bono — argued that Plato and Smith, who are responsible for law enforcement, had violated Bozalek’s order by continuing to confiscate their property, harass and abuse them. The contempt of court case was later dropped.

Caryn Gootkin, an activist and board member of Souper Troopers, a non-profit organisation working with street people, explained that the charges against Plato and Smith were dropped because the repercussions “are very drastic” as you can be imprisoned.

One of the seven applicants, Carin Gelderblom, ended up on the streets eight years ago after her husband died and she could no longer afford the rent on her home. She said she could no longer stand to see old homeless people having “their cardboard ripped out from under them” at three o’clock in the morning.

“It’s raining and his plastic (sheeting) is taken from him. How do you do that to a person?” said Gelderblom. She said despite the interim order, homeless people were still being harassed and chased away from the Company’s Garden and other areas.

Gelderblom said she was happy with Martin’s order as “anything that can protect us as homeless people is good, especially for older people”.

Shaun Strydom, who has been homeless for almost five years, said he still had his clothes, bedding, and even food, stolen by Cape Town Central City Improvement District (CCID) officers “all the time”.

Rameez Kemp, who has been on the streets for four years, said they now slept in De Waal Park which was semi-private so they were not harassed as much.

A review of the City’s by-laws affecting homeless people is set to be heard in February next year.

Mayco Member for Safety and Security JP Smith said in a media release that the City of Cape Town intends to appeal Judge Martin’s ruling.

Smith said that the “new order” permits the City to “issue fines to all people in the city, including street people in respect of contraventions of the by-laws concerned”.

He further said: “The fines issued to the seven applicants prior to the court case yesterday will not be prosecuted, but all new contraventions of the by-laws by them and all other persons will be prosecuted.”

But Judge Bozalek’s order clearly states the City may not enforce or prosecute fines or summonses issued to the seven applicants in respect of the “nuisance by-law” and the waste management by-law, and must “desist and refrain” from “interfering with or confiscating the personal property of the Applicants (and any other homeless people in the City of Cape Town) in ostensible reliance on the By-Laws”.

Bozalek’s order further states the City must desist and refrain from “harassing or abusing the Applicants (and any other homeless people in the City of Cape Town) in ostensible reliance on the By-Laws”.