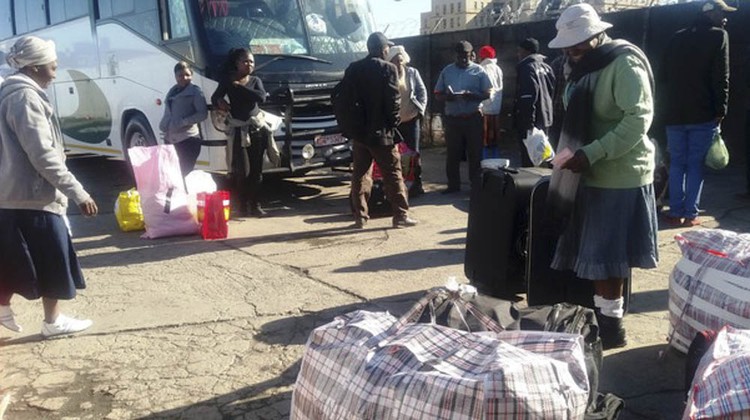 When Tanaka* sends money back to her family in Zimbabwe, she heads to Cape Town’s long-distance bus terminal to find passengers or drivers travelling to Harare.

She says it’s too expensive for her to send money electronically. “So if I see someone is going to Harare, then I give ‘hand-to-hand’”. This informal system of cross-border cash remittances is based on trust and convention. Her family uses what she sends to buy food, pay school fees and get medicine.

Tanaka, in her mid-50s, is self-employed as a garment maker and tailor. She makes dresses, sheets, pillowcases and other items, which she sells for a small profit. When times are tough, she doesn’t earn enough to send money home as regularly as she would like. “These days things are difficult. Even to look after myself is difficult,” she says.

Since arriving in South Africa to look for work in the early 1990s Tanaka, has relied on the “hand-to-hand” informal remittance system.

At first the rands she sent home were exchanged into Zimbabwe dollars. Since April 2009, the money must be converted into US dollars. But the route the money travels has stayed the same: along the N1 from Cape Town to the Beit Bridge border post and then on to the Zimbabwean capital. “Sometimes we don’t know each other,” says Tanaka of the people she depends on to physically carry money to her family in Harare, a road trip of 2,500 kilometres.

For the informal courriers a “gift” of a few dollars makes it worthwhile. As for Tanaka, she says the hand-to-hand system is cheaper than sending the money via banks or money transfer services such as Western Union.

And she is not alone.

Migrants, refugees and asylum seekers in South Africa send billions of rands home to their countries of origin every year.

Some, like Tanaka, rely on long-distance buses and taxis. Others choose friends or family members. Then there are informal courier systems or small agencies who operate in a legal grey zone, and, for north African migrants, hawala brokers.

All fall outside the formal system, meaning the amounts sent and received can only be roughly estimated by governments and economists.

A new survey by Cape Town-based refugee rights advocacy group The Scalabrini Centre has found that the high cost of sending money has kept migrants from using formal remittance systems. “For most focus group participants … the cost of remitting was identified as a significant obstacle and hardship for sending money,” wrote the authors of the study, which is based on group interviews with 28 African migrants from eight sub-Saharan countries.

The study “They are Looking to us” will be released later this month.

It found that while migrants were well aware of the informal system’s risks, for many its benefits still outweighed its disadvantages. Informal couriers can abscond with money, or fail to meet up with family members in the country of origin. If the money gets lost, there is no way to recoup it.

“If you choose someone to take your money home, he must have a job or family in South Africa, because otherwise there’s a chance he will take your money and be gone. He can switch off his number, and no one can look for him – that’s the problem,” a respondent explained to the study’s authors.

There are other risks too. Criminals have targeted buses transporting migrants home in the hope of stealing remittances.

The Scalabrini study’s findings are supported by a growing body of research on the costs of remitting money from South Africa. A World Bank study released in March, for example, found that South Africa remained “the costliest G20 country to send remittances from.”

“The cost of sending money continues to be exorbitantly high and regressive,” notes the Global Knowledge Partnership on Migration and Development in its latest policy brief.

The World Bank’s Remittance Prices Worldwide study is an attempt to put figures to the costs of remitting money worldwide. The project tracks the fluctuating costs of sending specific amounts of cash along popular “remittance corridors”, using US dollars to make comparisons easier.

While there is some debate over the World Bank’s figures - a 2016 remittance cost report released by the FinMark Trust suggested the World Bank had overestimated some of the costs, even these adjusted numbers are above the world average.

But cost is not the sole reason many migrants to South Africa have not chosen banks and formal money transfers. The Scalabrini Centre study found that many participants wanted to enter the formal market, but were put off by what they viewed as onerous documentation requirements. This, coupled with concerns over cost and a distrust of authorities, meant they stayed with informal systems.

“While most agreed that sending money through banks, or formal transfer mechanisms such as Western Union, were the safest and most reliable means of remitting, for many this is not an option,” noted the study’s authors.

This was especially true for those who didn’t have proof of address documents, universally required to access formal payment systems. An alternative would be an affidavit signed by police. But the authors found that many refugees, asylum seekers and legal migrants were “reluctant to engage with the police on any level”. As a result, they continued to use informal systems.

The FinMark Trust’s 2016 study, meanwhile, identified a third reason why migrants shun formal systems: confusing multi-tiered pricing structures. The 2016 study “Cross Border Remittances” reported that migrants found the payment models “opaque”. “Money transfer fees can be tiered, a percentage of the amount sent, or a fixed fee,” wrote the researchers. “In addition, the costs incorporate an exchange rate margin, which is often not disclosed unless requested, and which can fluctuate with the exchange rate over the course of a day.”

As a result, the study found, informal channels still provided “a more compelling proposition for remittance senders, even for those who are legally in South Africa.”

African governments have made moves to make formal remittance payments less of a hassle.

Globally, the average cost to remit $200 has fallen to 7.45% from 10% in 2008. And development economists are confident this figure can fall still further. The G20 group of nations, which includes South Africa, has pledged to work together to decrease this to just 5%. The UN’s Sustainable Development Goal’s target is an even more ambitious 3%.

To ease payments, South Africa in 2014 introduced new legislation to make it easier for new “Money Transfer Operators” to enter the remittances market, without needing the backing of established banks. These new rules opened the door for new players such as Mukuru and Momma Money, who have gained a growing foothold by clever use of social media, new technology and cheap rates. Their prices are, on average, far lower than banks and established money transfer agencies. Momma Money, for example, promises a flat rate of 5% to send money to Ghana, Nigeria, Tanzania and Zimbabwe.

Receiving countries have also woken up to the benefits of remittances, and tried to entice people into the formal market. Last year, Zimbabwe rolled out an initiative to pay a 3% bonus to migrants who remitted money to Zimbabwe via formal channels. Formal remittances to Zimbabwe totalled $750 million (R10 billion) in 2016, according to the Zimbabwe Reserve Bank. This figure easily dwarfs all foreign aid to Zimbabwe. It is an increase of over $400 million dollars since 2006 when $300 million was sent, a sign that more migrants are starting to trust the formal system.

For Miranda Madikane, the director of the of the Scalabrini Centre, any initiatives that make it easier and cheaper for migrants such as Tanaka to sent money home to Zimbabwe are welcome. She hopes that South Africa can drop its average formal fees from 15% by 7 percentage points to the global average of 7.45 %.

“Migration does and can support development in the region,” she said. “But we are losing 7% to corporates.”

For Madikane, the final goal is getting the rate down to the UN’s Sustainable Development Goal’s target of 3%. “This is, after all, money that goes directly into the homes of the people who are sending,” she said. “It’s a direct benefit”.