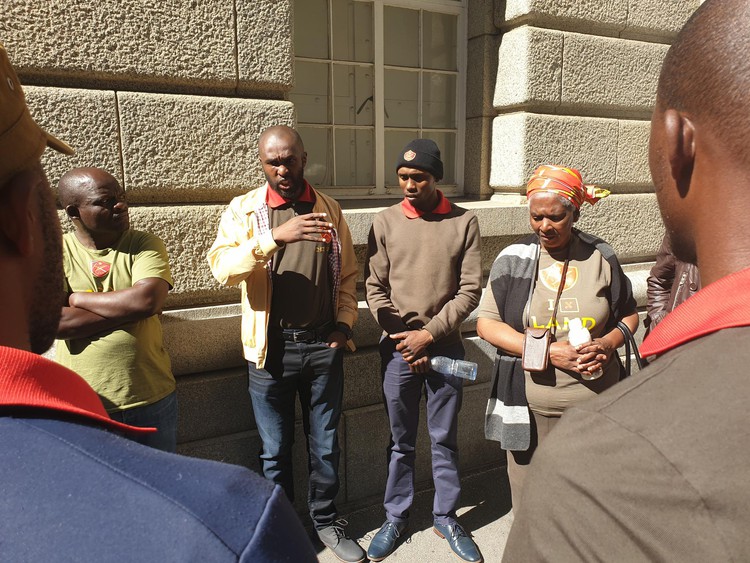 The court case involving the occupation of private land in Schulphoek, Hermanus by backyard dwellers, was postponed without a date on Thursday in the Western Cape High Court.

The postponement, granted by Judge Babalwa Pearl Mantame, came at the request of the residents’ advocate Thulasizwe Twalo, who says the reason for asking for the postponement was because there were ongoing negotiations for the sale of the land.

The eviction proceedings were brought against backyard dwellers from Zwelihle by the owners of the land, Cape Theme Parks and Cavcor. The backyard dwellers have been occupying the land since March last year. They have named the informal settlement Dubai and resisted numerous attempts by the Red Ants to remove them last year, which resulted in unrest and protests in Hermanus.

Twalo said the negotiations were about the Overstrand Municipality saying it would purchase the Schulphoek land for the residents.

Briefing the residents outside the courtroom, Twalo said: “The municipality is serious about buying the land and they are close to finishing the negotiations. For now people will stay on that land. This is good for us as it means that our fighting is coming to fruition.”

But Riana Steenkamp, spokesperson for Overstrand, said the municipality would not be buying the land as it was not in its mandate to do so. She referred us to the provincial department of human settlements.

Human settlements department spokesperson, Muneera Allie confirmed her department was involved in negotiations with the municipality, Cavcor and Cape Metropolitan. “Given the sensitivity of the negotiations, coupled with the fact that we await legal advice … we are not able to respond in detail,” said Allie.

Allie said that if the land is purchased the intention is for it to be a “mixed use development” consisting of “residential, business, community and recreational facilities”.

With a bruised and scratched eye, Ndzongana said that he was attacked at his home on Tuesday night by about 30 men armed with guns and knives.

“It was around 8pm and I was with my family and some of my comrades, when the door was kicked in and I was grabbed and dragged outside. They beat me up and the community came to my rescue. While they were beating me, they were saying I must stop leading the people,” said Ndzongana.

Mabetjhe also recalled an incident which happened on the same night as Ndzongana, but around 7pm. He said he was driving on his way home when he was followed by a minibus taxi. When he arrived at his shack and got out of the car, four men from the taxi got out and opened fire on him.

“My 11-year-old daughter and my five year old neighbour’s daughter witnessed everything. Till this day they are terrified. I remember my daughter yelling ‘Tata tata [dad, dad]’ when I was running for my life,” said Mabetjhe.

The case has been postponed sine die (without a date).