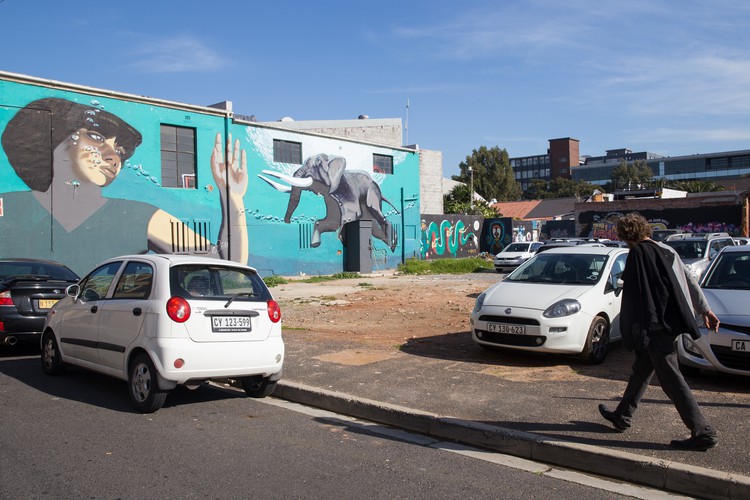 Heritage Western Cape has told developers of an eight-storey apartment block on a site in Woodstock, Cape Town, to review their plans. Photo: Ashraf Hendricks

Plans to build a luxury eight-storey apartment block in Woodstock have been put on hold by Heritage Western Cape, who have instructed the developers to review the impact on social heritage.

This is a first for Woodstock, where a number of upmarket developments over the last decade have disrupted the housing market in the historically working class suburb, resulting in evictions and displacement of residents who have lived there for generations.

Heritage Western Cape’s instruction last week to Signatura Property Development, who want to build an apartment block on the corner of Albert Road and Frere Street, came after submissions were made on Wednesday by the Woodstock Residents’ Association and Reclaim the City, an organisation campaigning for affordable housing.

The building plans show five retail spaces on the ground floor, parking for 54 vehicles on the rest of the ground floor and first and second levels, and 16 one-bedroom and six two-bedroom units on floors three to eight.

Both the residents’ association and Reclaim the City accuse the developers of riding roughshod over the historic community structure in the area, resulting in rent hikes and evictions that have displaced families who have lived in Woodstock and adjacent Salt River for generations.

The planned development, Wex2, is two blocks away from the completed 10-storey Wex1 development, where two-bedroom apartments sell for R3.5 million.

The Heritage Impact Assessment states the developers have agreed to hire local artisans and builders in the construction phase, and include small business “applicants” in the building’s ground level, where five retail spaces are to be built. Additionally, “street art” is to be included in the lobby and on a dedicated exterior wall on the site.

But, under “Social Impacts”, which is one of four heritage impacts to be taken into account, the Heritage Impact Assessment states: “the dominant issue and finding is that the accelerated gentrification effect occurring in Woodstock, and the immediate surrounds of the site, has undermined the living heritage and social structure of the area.”

The author of the social impact study, Maurietta Stewart, noted the design “has not responded to the recommendation that inclusionary housing units be rented or sold via an adequate legal mechanism to ensure that the units stay affordable in perpetuity”.

She says the developer did consider building an affordable housing model on another site in Woodstock to mitigate the impact of “the intensive, high density development”.

“However, current market conditions and returns on this development were noted as preventative.”

Signatura is in partnership with Indigo Properties. Signatura was launched in 2012 by John Rabie, founder of the Rabie property group. Rabie Property Administrators are the managing agents for the entire Indigo Properties portfolio. Together, they are responsible for the Wex1 development, the Biscuit Mill, and the Woodstock Exchange, all within blocks of each other on Albert Road.

To what extent gentrification has affected long-standing communities in Woodstock and Salt River was illustrated in an oral presentation by Karen Hendricks, who is a leader of Reclaim the City’s Woodstock Chapter, to Heritage Western Cape on Wednesday.

Hendricks said her family had rented homes between District 6 and Woodstock for four generations, and she had been born in the same Woodstock home as her mother.

When she was in high school her family moved to a different house in Woodstock, where they stayed for 30 years before it was sold to a private developer who turned it into an office, and later, an AirBnB. Ironically, her family managed to stay in the “grey” area of Woodstock under the apartheid-era Group Areas Act, but have been ousted by the commercial imperatives of the post-1994 democracy.

She gave a moving account of the importance of generational community networks. “The same families lived around us for most of my childhood. My mom knew them from before our birth so having children was like extending the very big family. My brother and sister even got married to young people from the community, so neighbours in fact became family.”

Hendricks is just one of hundreds of families whose access to housing has been disrupted by development. There are about 300 families occupying Cissie Gool House who are there because development has pushed them out of the rental market, and scores of other families have dispersed to areas far away from the city centre, said house leader Bevil Lucas.

Heritage Western Cape CEO Mxolisi Dlamuka said the developers had been asked to re-examine the living heritage and ‘memory of community’ aspects of the Heritage Impact Assessment and to review the design of the development.

Signatura directors were not available when GroundUp called at 2pm on Friday. GroundUp was told they would only be available on Tuesday. Questions sent Tuesday early afternoon had not been answered by the time of publication. Responses will be added when they are received.

This story was edited to remove references to comments supplied by the Woodstock Residents’ Association but which applied to another development.