Here is the list of art destroyed on UCT 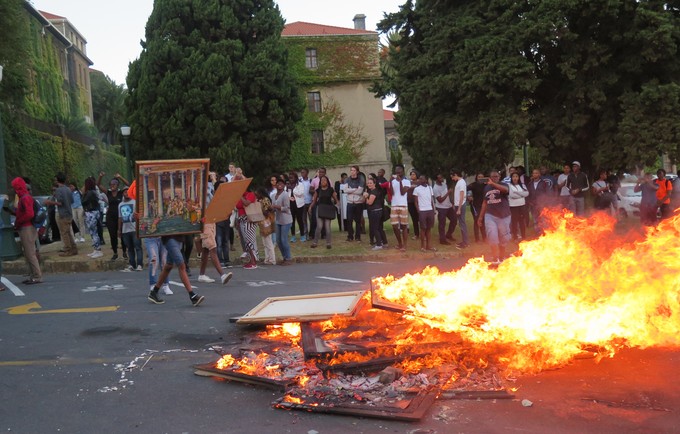 Protesters on UCT carry artworks to be burnt in February 2016. Photo: Ashleigh Furlong

In addition to a list of 75 art works removed by the University of Cape Town (UCT), GroundUp has now obtained a list of artworks destroyed in the Shackville protests last year and a list of works deemed to be problematic by student representatives on the Artworks Task Team (ATT) in 2015. The list was obtained from the university via a PAIA request (Promotion of Access to Information Act) submitted by William Daniels, a UCT staff member.

The university refused to reveal the titles to GroundUp, but we have, with assistance, worked out most of the titles.

Various artists, including David Goldblatt, Willie Bester, and Breyten Breytenbach, have criticised UCT’s response to student pressure to remove statues, busts, and other works of art from campus.

“In September of last year I wrote to Max Price and said that I wished to revoke my contract with the university,” said Goldblatt, a world renowned photographer whose work exposed the oppression of apartheid. Goldblatt’s decision to remove his collection of photographs from the Libraries Special Collections, a centre that he helped to establish, came after “the throwing of shit onto Cecil John Rhodes’ sculpture… following that the burning of over 20 paintings and the burning, in particular of two photographs by Molly Blackburn.” Blackburn was an anti-apartheid activist who died in a motor vehicle accident that some suspect was caused by the apartheid government.

Breyten Breytenbach, whose Hovering Dog is on the list of works identified as unacceptable by students on the task team, has had three paintings removed and put into indefinite storage by the university.

Breytenbach wrote to GroundUp: “I fully support the decision of David Goldblatt and others to withdraw / remove / take back / take elsewhere (preferably out of the country altogether) whatever material or artworks they may have had at UCT, or were kept in custodianship by the university.”

Unlike Goldblatt, Breytenbach’s works are part of the Hans Porer Collection at UCT. “None of these parties – collector, owner, executor or executioner – bothered to even have the simple decency of informing me,” he added.

One of the main concerns for both artists is what they call the university’s disregard for the protection of the freedom of expression guaranteed to all South Africans under the Constitution.

Goldblatt insists that the university’s actions differ from the curatorship that takes place in museums around the world. Rather, he says that the administration is blatantly censoring selected works. “It’s different fundamentally [from curatorship] because they did so selectively. They selected certain works. Now, to select certain works is to censor. You cannot do this selectively; either you do this to all of them or none of them.”

He thinks UCT’s actions are dangerous. “At the end of the day, if this kind of attitude persists in the university, what will they do when a group of students come to the archive of photographs and say: ‘You’ve got photos there of Muslims. We’re not prepared to tolerate that. No Muslims, no Jews, or the Anglicans, or people with green eyes’,” said Goldblatt.

“But, if I’m a painter and I choose to show Jacob Zuma with his penis showing, then the question arises – am I to be censored for that?” he asked.

“I strongly urge all South African artists, researchers, recorders of public life etc., and as well those of foreign origin whose products may end up at South African universities, even if inadvertently so, to make absolutely sure your work is not allowed to be acquired, loaned or otherwise used by South African universities,” Breytenbach wrote to GroundUp. “You have no chance of it (the work) being seen for what it is intended to be, no guarantee it will survive the orgies of destruction these institutions foster and no responsibility or accountability (let alone preservation) will be forthcoming from the ethically and aesthetically spineless but oh so glib ‘collaborators’ running the universities.”

We sent UCT the quotes by Goldblatt and Breytenbach and asked for the institution’s response. We were sent the same statement written by Vice-Chancellor Max Price in response to Professor Belinda Bozzoli, previously published on GroundUp.

The descriptions are by the students who objected to the works. GroundUp has added the artist and title of the work. (All images republished as fair use.)

1. Hovering Dog by Breyten Breytenbach (Student description: Portrait of white man with black woman on his lap having sexual intercourse)

3. A Passerby by Zwelethu Mthethwa (Student description: Black woman sitting on a rock with three children with her all in their underwear in a plastic basin with an impoverished surrounding)

4. Pasiphaë by Diane Victor (Student description: Portrait of a bull inside it is a black man with his genitals exposed)

5. Dialogue at the Dogwatch by David Brown (Student description: A number of sculptures depicting black men with their genitals exposed)

7. Similar to the sculptures on the Kramer lawn by David Brown

10. Dayaba Usman with the monkey clear, Nigeria by Pieter Hugo. (Student description: Black boy sitting next to a monkey made to replicate the monkey)

24. Molly Blackburn Collages (not identified by UCT, but confirmed)