Hekpoort settlement has been trying for 12 years to get water 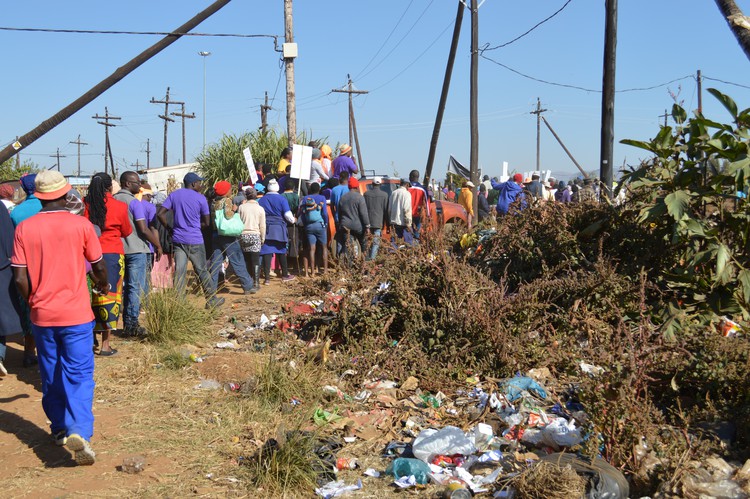 Politicians don’t work for people, say residents of the settlement of Schaumburg in the North West Province. They are going into the rainy season without the water or sanitation services they have been asking for since 2005.

Residents of the settlement, which lies between Hekpoort and Skeerpoort, say there has been no progress since a group of 3,500 residents protested in June. None of the authorities concerned – the Madibeng Municipality and the provincial departments of Water and Sanitation and Basic Education – have responded to their demands. Schaumburg Residents Committee member Oscar Nkgoeng told Groundup: “We are still using the pit toilets. It’s now 12 years without proper water. And the government still isn’t coming to the party.”

Committee member Vivien Laverge says out of “anger and desperation” the community is now turning to the private sector for donations for a water system.

One borehole pump services the community’s 6,000 residents and the committee wants to instal a tap on every street corner – a project which they estimate would cost just over R500,000. They also want to build a storm water drain to channel flood water during the rainy season.

“Schaumburg is about to have its rainy season, and community members are concerned that their houses are going to be flooded,” Laverge said.

Maanda Mandavha, regional head of Bulk Infrastructure for the North West Department of Water and Sanitation, said it was up to local government to develop a plan.

“We’re struggling even to get drinking water. That is our main problem,” Nkgoeng said.

Other demands raised at the march in June included the improvement of a local secondary school; regular refuse and waste removal (residents burn their own rubbish every week).

The community is frustrated because it has followed what Laverge calls “the perfect political procedural ways of doing things” with no results. “The community didn’t just march to demand. It had done its homework, groundwork and investigations,” Laverge said. “This community has really worked on solution-based memorandums. People are angry.”

Committee Member Abdullah Milanzi said he was frustrated with the politicians.

This article was amended to correct the spelling of Schaumburg.