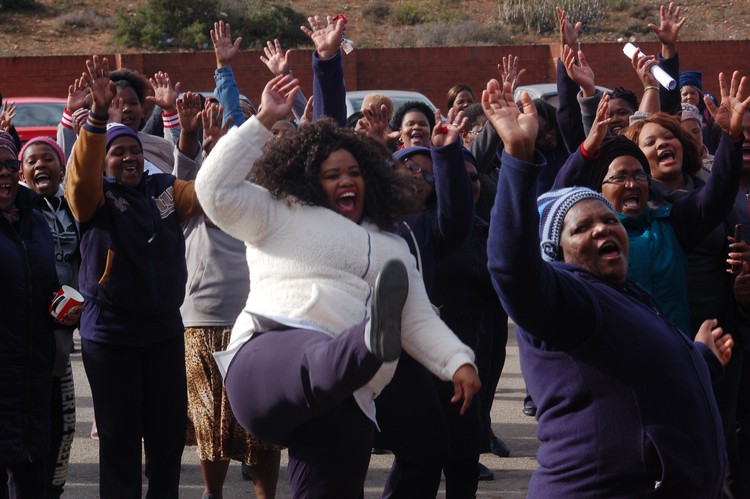 Patients went untreated at Leatitia Bam Health Centre in KwaNobuhle, Uitenhage on Monday morning as health workers went on strike. The workers are demanding that better safety measures be implemented at the centre.

“Tools down until the security guards get firearms,” shouted one of the nurses. “We will help you when we feel safe,” another nurse shouted.

Protest leader Siyabulela Velezantsi who works as a radiographer said, “Last year I was chased by a rude patient with an okapi [knife] while demanding to be attended first”.

“We are demanding panic buttons, a regular patrol by the SAPS members, plus guns for all the security guards at the gate,” said Velezantsi.

Resident Ntombekhaya Daku said she supported the strike. “These people are working under extreme conditions. People at the township shoot each other and when they are taken to this hospital, the friends of the injured demand attention before everybody else.”

Velezantsi said that the security guards were often faced with dangerous situations. “Last week Sunday, thugs held four of them at gunpoint at the gate … The thugs fled with the security’s handcuffs, batons and radios. This means that we are all not safe.”

Forty-weeks pregnant Nwabisa Stemele, 28, who sat unattended at the hospital said, “The nurses informed us that it is up to us to stay here or go home. I am here to get a date to be hospitalized at the provincial hospital in town until I go into labour. However all nurses just look neglect us.”

“MEC Helen Sauls-August appreciates the concerns raised by the nurses. However, she is against the disruption of services and embarking on strike by essential service workers. Their safety concerns are being prioritised,” said Sicwetsha.

“There is a register to prove that SAPS members do patrol at night at the hospital,” said police spokesperson Sergeant Majola Nkohli.