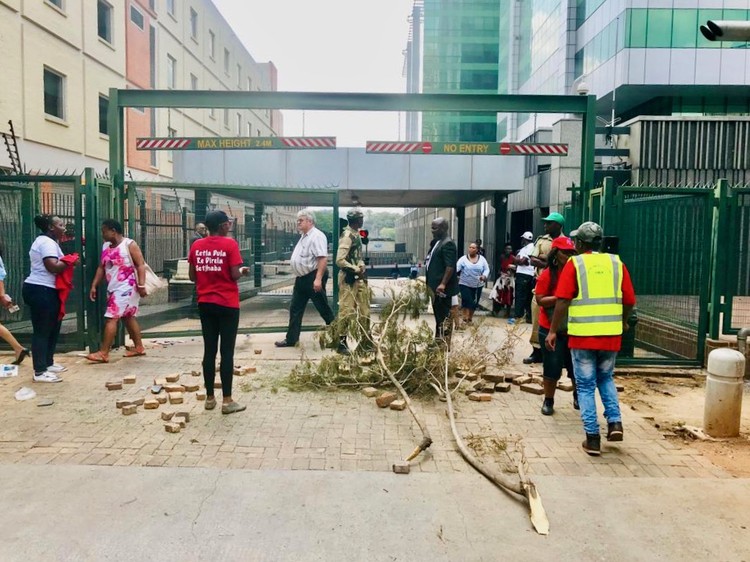 On Tuesday, Gauteng community health care workers blocked entrances to the Department of Health building on Thabo Sehume Street in Tshwane. They barricaded the main gate with stones and branches of trees.

“We are tired of being ignored … They are taking us for fools,” a protester shouted.

The workers were demanding to see Minister of Health Aaron Motsoaledi. Security guards told them he was not in the building.

Later, security personnel pepper-sprayed some of the workers and threatened to call the police. Workers hurled insults in return and shut the gates.

At issue are are one-year fixed term contracts currently being distributed to community health care workers. Two weeks ago the workers protested over the contracts at the Department of Health in Johannesburg. Officials promised to reply within a week.

“We have not been given feedback as promised during our previous protest. The Gauteng Department of Health failed us, that is why we are here in Tshwane today. We want Motsoaledi, otherwise we will sleep outside the department,” said Tshepo Masego, a member of the Community Health Care Workers’ Forum, from Simunye clinic in Ekurhuleni.

“They feed us with lies as if we are children … Some of our members signed the contracts because they were threatened. We deserve better,” said Masego.

“We completed all training under the department … We want to earn R10,500, which is a living wage. We should earn the same as other nurses. We will continue fighting until things become right,” said Masego.

Zanele Nomdikinye from extension 7 clinic in Orange Farm has been a community health care worker for over 10 years. She said, “We won a case at the Bargaining Council last year and we were declared permanent [employees]. The department should follow suit and make us permanent. We should earn a salary fit for permanent health workers. We should also have benefits such as medical aid … How can a permanent health worker earn [only] R3,500?”

Meanwhile dozens of community health care workers from around Pretoria filled the Department of Health Tshwane District Office at the corner of Lilian Ngoyi and Pretorius streets. Many of them have been out of work since refusing to sign contracts in 2016.

“It’s never easy to be out of a job. That R3,500 which people are rejecting is a lot to some people. At the end of the day people think of their circumstances at home and end up signing the contracts. Those who do not sign, risk not earning their salaries for the next year,” said Zoleka Mboleswa. She had refused to sign in 2016 but continued to work for nine months without a salary. In the end she signed, in January 2017. She never received any back pay.

“It is still a long road for all community health care workers. Hopefully one day the Department of Health will be able to put themselves in our shoes … Maybe then they will be able to understand just how much we are suffering,” said Mboleswa.

The Department of Health has still not responded to GroundUp’s queries on community health worker contracts for our story published on 22 February.

Spokesperson Foster Mohale, said the department would respond on Wednesday. This article will be updated when the response is received.