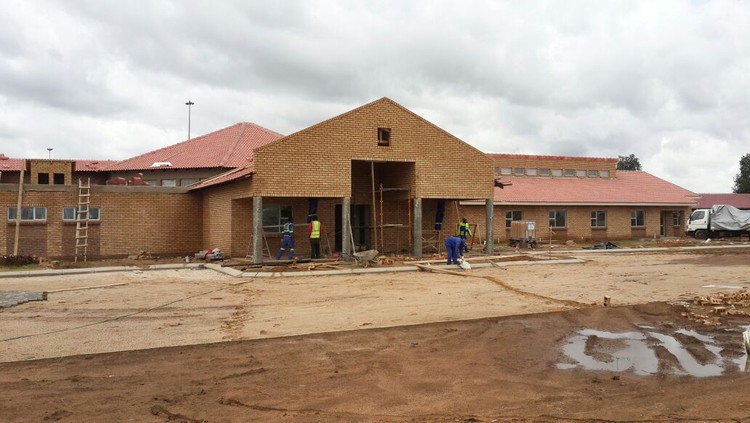 Optimum Coal Mine has failed to pay the final tranche to finish building this clinic in Hendrina, Mpumalanga, pictured here during its construction. It is now 95% complete. Photo supplied

By Nathan Geffen and Lilly Wimberly

The Gupta-owned company Optimum Coal Mine has issued a summons for R10 million against a small company. Optimum alleges Re-Action Consulting, which builds public health clinics, has published false and defamatory statements in court papers.

The Daily Maverick, AmaBhungane, News24, TimesLive, and even GroundUp, have between them published numerous widely circulated highly damaging claims about the Gupta family, their companies, agents and representatives, including Optimum. So did the Public Protector in the report State of Capture. Yet, as far as we are aware no litigation is active against these institutions for defamation by the Guptas or their companies (we’ve confirmed this with Daily Maverick and AmaBhungane).

Re-Action is litigating to get Optimum wound up for being unable to pay its debts. This came after Optimum failed to pay approximately R4 million to Re-Action for the building of a clinic in Mpumalanga Province as part of Optimum’s social and labour commitments under the Mining Charter.

Optimum’s response has been to sue Re-Action for statements in the latter’s founding affidavit that merely repeat allegations that have already appeared in the media and are well-known to the public. Optimum’s summons to Re-Action is dated 11 May, well after these allegations had appeared in the media or Public Protector’s report, and over a month before GroundUp reported that Re-Action is litigating against Optimum. Yet Re-Action’s founding affidavit, albeit a document that is in theory available to members of the public if they go and get it from the High Court in Johannesburg, has almost certainly been read by no more than a handful of people involved in the court case.

The amount Optimum is demanding is also out of kilter with South African defamation cases: R1 million in special and R9 million for general damages. An advocate who specialises in defamation explained to GroundUp that to win special damages, the plaintiff must provide proof that the statements caused measurable suffering, such as contracts lost. General damages are subjective and difficult to quantify, such as a loss to reputation or “pain and suffering”. Courts are conservative when it comes to awarding general damages. The advocate said that he is unaware of any cases where more than R250,000 has been awarded.

Optimum did not respond to a request for comment.

Defamation cases are extremely hard for the plaintiff to win in South Africa. Since most or all of the claims (see below) are likely true and in the public interest (a standard defence against defamation claims), it is improbable that Optimum will convince a court to find in its favour.

The allegedly defamatory statements in Re-Action’s court papers that Optimum is suing for include (quotes lightly edited for length and to correct typos):