Gugulethu toddler needs a liver transplant … and a better house 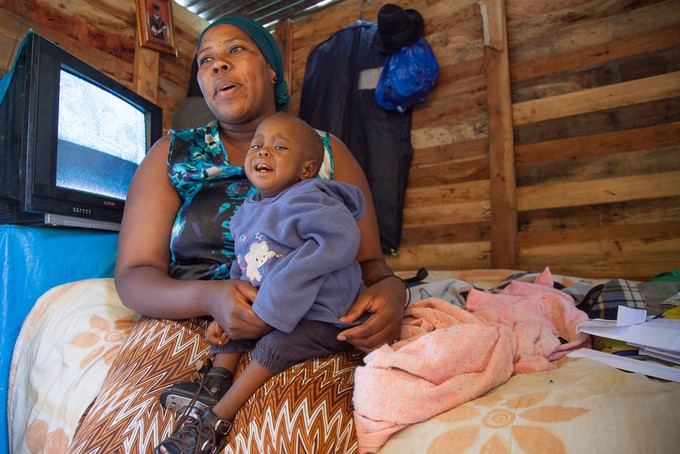 One-year-old Siyanda Tafeni needs a liver transplant. But even if a donor can be found quickly, doctors warn that the toddler may not survive the transplant unless he gets better housing, with an inside toilet and running water.

Siyanda lives with his parents, his eight-year-old sister and five-year-old brother in Europe settlement in Gugulethu. The family’s one-room shack is nestled between other shacks and is so tiny that it can easily be missed. Inside the shack, which has no proper ventilation, because a board has been nailed down over the window, there is room only for a double bed and a tall fridge. The family shares an outside bucket toilet with other families.

Both parents are unemployed.

Babalwa Tafeni says the family moved to Cape Town from the Eastern Cape so that Siyanda could be treated at Red Cross Children’s Hospital.

At a routine check-up when she was seven months pregnant, she says, she was told her baby was not growing. She was booked into the hospital for tests and later told she had to have an emergency delivery “because there were complications with my baby.”

Tafeni was discharged from hospital the day Siyanda was born, but the following day he fell ill. His eyes and tongue were yellow and he was sweating excessively, with the sweat also turning his clothes yellow, she says.

“I took him to hospital and he was admitted. I was told he would have to undergo surgery because there was a problem with his bile duct. The surgery was done. Two months down the line he fell ill again and was diagnosed with biliary atresia. My family and I moved to Cape Town and Siyanda started going to Red Cross Children’s Hospital where I was told that because of his disease, he would need a new liver or he might not make it to five years,” says Tafeni.

Biliary atresia is a rare disease of the liver and bile ducts that occurs in infants. Bile helps the body digest food and remove toxins. In this disease the liver’s bile ducts do not have normal openings, causing the bile to get trapped. This causes the liver to scar, lose tissue and eventually fail. (Source: US NIH)

But if Siyanda gets a transplant, the family will have to find new housing.

In a letter provided to Tafeni so that she can apply for housing, the Red Cross doctors say: “Patients who undergo a liver transplant require long term medication that suppress their immune function hence they need to be in proper housing, with an indoor toilet and access to clean water and not in an overcrowded environment.”

An expert liver doctor told GroundUp that after a transplant, patients needed clean running water and sanitation to avoid the risk of infection.

He said that social workers in hospitals like Red Cross often came across housing issues when assessing patients who were to receive transplants. This was a well-known problem in the medical community, he said.

“Our challenges are social. The sticky point is access to running water and sanitation. This is the same for people on renal dialysis,” he said.

“Unless you have social backup you can’t transplant somebody who is going to go back into that environment on immunosuppressants, get an infection and die.”

The doctor said people often waited years for a liver. With a condition like biliary atresia, it was in the patient’s best interest to get a transplant as quickly as possible.