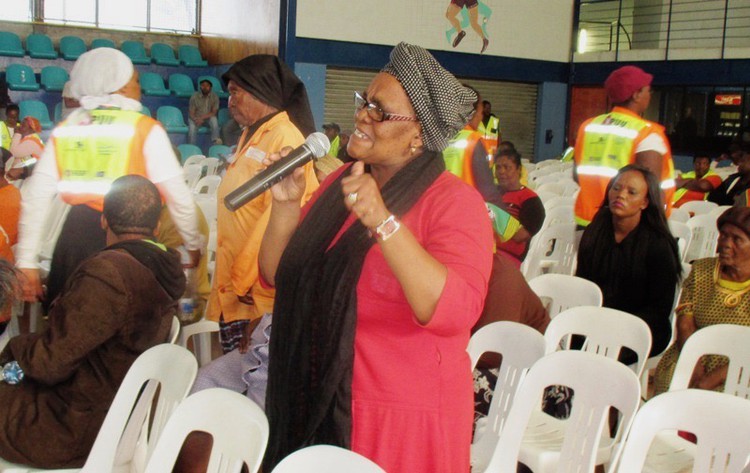 Joyce Malebu, a pensioner from Gugulethu, complained about poor policing at an imbizo with Deputy Minister of Police Bongani Mkongi. Photo: Mandla Mnyakama

On Friday, at an imbizo with Deputy Minister of Police Bongani Mkongi and the community, held at Gugulethu Sports Complex, frustrated residents used the poorly attended event to raise issues around insufficient and inefficient policing.

The event followed the handing over of a mobile police station by Mkongi to the community, earlier in the day.

The community also wanted an end to the release of criminal suspects who have not been taken to court and are released without consulting the people who laid the charges.

Residents said they have seen a spate of vehicle hijackings, ATM robberies, and break-ins by armed syndicates.

Wendy Hlazo said her 22-year-old daughter was murdered and the suspect freed a day later without appearing in court.

“Every time I approached the Gugulethu Detective Department for investigation, I get informed that the officer in charge of that case is on leave,” she said.

“I want to utilize the opportunity that the minister is here to get the authorities to follow up the case,” said Hlazo.

Nombulelo Mzotyeni said she was constantly traumatised because every day she saw the man accused of the murder of her son in 2012, the breadwinner in the family, walking freely, “as if he is bragging about his cruel deeds”.

Another woman, Cynthia [full name not given to protect her identity], said her drug-using son beat her when she reprimanded him and he demanded money. She said she had given up going to the police for help.

“All the recent attempts I have made to get my 33-year-old son and a drug-dealing neighbour arrested have been pointless.” She wants her son put in rehabilitation.

She said that when one flagged down a police van, the officers told one to call the next shift.

“I need help … It is intolerable … It’s difficult for me to find help, because we no longer have proper community leaders like it used to be in the olden days,” she said.

Nomvula Ntantiso complained that when she recently tried to lay criminal charges at the Gugulethu police station, she had been instructed to make an appointment.

Mkongi and the Western Cape Police Management urged the complainants to provide them with their particulars so that the matters could be investigated.

In the 2016 statistical year, there were 184 murders, 114 attempted murders, 686 serious assaults and 243 cases of sexual offences in Gugulethu.