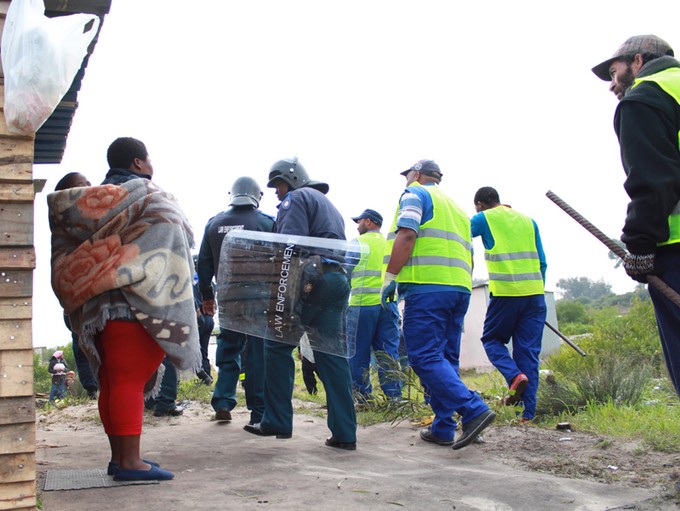 Marikana residents are seeking a court order which dismisses applications for their eviction.
Photo: Masixole Feni

The case of the residents of Marikana in Philippi, due to be heard by the Western Cape High Court in February 2017, aims to change the way the authorities deal with evictions.

In its heads of argument, the Socio-Economic Rights Institute (SERI), acting for the Marikana community, argues that the City of Cape Town should have an obligation to expropriate the land in terms of the Housing Act of 1997. This act allows the state to expropriate land for the purpose of housing development, provided that the development falls under a national housing programme. SERI argues that South Africa has two housing codes that could apply to this situation: the Emergency Housing Programme and the Upgrading of Informal Settlements Programme.

In other words, this case is now no longer about evictions, it is now about expropriation.

The Marikana settlement has been embroiled in litigation since May 2014 when land-owner Iris Fischer filed an application to evict the community under the Prevention of Illegal Evictions Act (PIE).

Applications under PIE are common and when they involve private property, are usually straightforward, but the Fischer application has been anything but.

It is important to remember how the Marikana settlement came to be and how it grew to become a home for over 50,000 people in over 10,000 households.

Cape Town faces a growing housing crisis. According to the City of Cape Town, there are 350,000 households in the municipality waiting for formal housing, but the budget provides for only 6,100 formal housing opportunities a year.

The problem is exacerbated in some ways by the Anti-Land Invasion Unit which has demolished a number of informal settlements and removed the inhabitants in what are alleged to be violent and unlawful evictions.

In all of this, as SERI points out, it would be difficult to argue that these individuals’ right to housing was violated by the mass evictions, since the City did not view their homes as adequate housing.

As these mass evictions continued, people began to congregate at the Fischer property and it became known as a place for the homeless to settle after being evicted. In fact, an investigation conducted by the City showed that the residents of Marikana came from just under 30 different sites, all as a result of homelessness. People began to move onto the property from as early as 2012.

Over the years, the community grew from a few households barely encroaching on the Fischer property to a fully-fledged community with thousands of families.

When Fischer filed her eviction application, the City washed its hands of any responsibility and left it to the property owner to resolve the issue.

However, the community continued to grow and has reached the point where all parties agree an eviction of this magnitude is almost impossible. Additionally, almost all the parties agree in court papers that an eviction would create “an undesirable and severe disruption to the social fabric” of the community. When phrased this way, one can almost imagine Marikana as a modern day District Six.

But it is important to remember that while the settlement offers thousands of people some shelter, they have no access to basic services including water, electricity and sanitation. As SERI states in its heads of argument: “People move to a property like this in desperation – not out of choice”.

However, while the residents are desperate, they are not letting the City off the hook. They are seeking an order which includes dismissal of the eviction applications. They also seek to force the City to negotiate to purchase the land and report to the court on the results of these negotiations.

The difficulty is that even if the application succeeds and the City is compelled to purchase or expropriate the land in question, there is no guarantee that the conditions the Marikana community lives in will improve. In fact, there would be no guarantee that, after acquiring the land, the City of Cape Town would not seek to evict the residents itself.

In August a judge postponed the matter till next year (because an interested party needs representation). There is no doubt that this case is poised to shift thinking about government’s response to the housing crisis.