The grim life of a Philippi farm worker

But farmers say they too are struggling 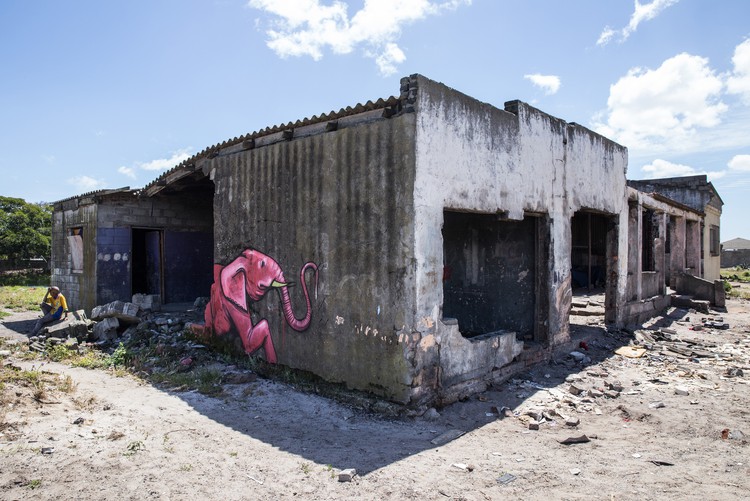 The dilapidated house where farm worker Fransina Sauls and her family live with a dozen other people on the Bock family’s farm in the Philippi Horticultural Area. Photo: Ashraf Hendricks

Fransina Sauls has been living and working on the Bock family farm in the Philippi Horticultural Area in Cape Town for nearly a decade. The building she and her family shares with several families is falling apart. But the Bock family say the can do nothing; they are battling just to keep their father’s vegetable and pig farm going.

When GroundUp visited the farm, Sauls’ daughter, Crystalline, was sitting outside with her partner and their three toddlers while her one-month-old baby slept on a bed a few steps away. She pointed out her mother’s room – a tiny, dark space big enough to fit a single bed, with cracked walls and plastic sheeting on the broken roof. Part of the structure’s walls have caved in and is still charred from a fire that gutted one of the rooms a few years ago.

The area around the building which once housed the farm’s workers now resembles a rubbish dump. There are two pit toilets on the property for workers, but they say the toilets fill up regularly and are dangerous for young children. Though they are charged for water every week, the workers can only collect water during the day when the farmer opens the gates to the yard of the main house, which is protected by five large dogs.

Crystalline said their living conditions were deteriorating, but she was unemployed and had nowhere else to go. Sauls told GroundUp that she earned R300 per week and battled to make ends meet after deductions from her weekly wages for electricity, water and UIF. She moved to Cape Town from Riviersonderend nearly two decades ago in search of work and better opportunities for her children.

Community activist Rodney Kha said that the conditions on the Bock family’s farm were not unusual in the horticultural farming area. “These people are hidden from the public eye, so many people don’t know how the workers and farm dwellers here live,” he said.

Khan said he was shocked to see the condition of the house where the Sauls and the other families live. “Why hasn’t the farmer fixed the house or at least made the rooms a bit better?”

He said many workers in the area were not being paid the minimum wage; many farm dwellers did not have IDs, and growing unemployment in the community often meant an increase in crime and drug and alcohol abuse.

“These people have been forgotten and neglected by government and organisations who are meant to fight for farmworkers’ rights. No one has come onto these farms to offer assistance,” he said.

The Bocks have been farming in the Philippi Horticultural Area for more than 50 years. A year ago, the farm’s owner Eric Bock died. Since then, his son, Arno, and daughter, Beula Bock, have taken over the operations of the farm in a bid to keep the family business afloat. “Otherwise we would have had to close down, then everybody would have been without work,” said Beula Bock.

When asked about the current conditions of the workers and other people living on the farm, Bock acknowledged the poor condition of the building where Sauls lives but said that there was very little they could do about it. “Only two of the people living there work for me. They don’t pay rent. We only charge for water and electricity,” she said.

Bock admitted that workers had to collect their water from a tap in the farmhouse yard but said the gates were only shut “after 6pm for everybody’s protection and safety”.

She said it was hard to maintain the building Sauls lives in because over the years so many other people had moved onto the property. “There are about 30 people living there and we have no control over that. We can’t get them out. We haven’t got room to move our farm workers to this side either,” she said.

“They don’t have to live there. There are a lot of opportunities to go and apply for housing … We really try to do what we can. You’ve seen what it looks like there. We have bins here, and I’ve given them black bags, but they don’t use them,” she said. 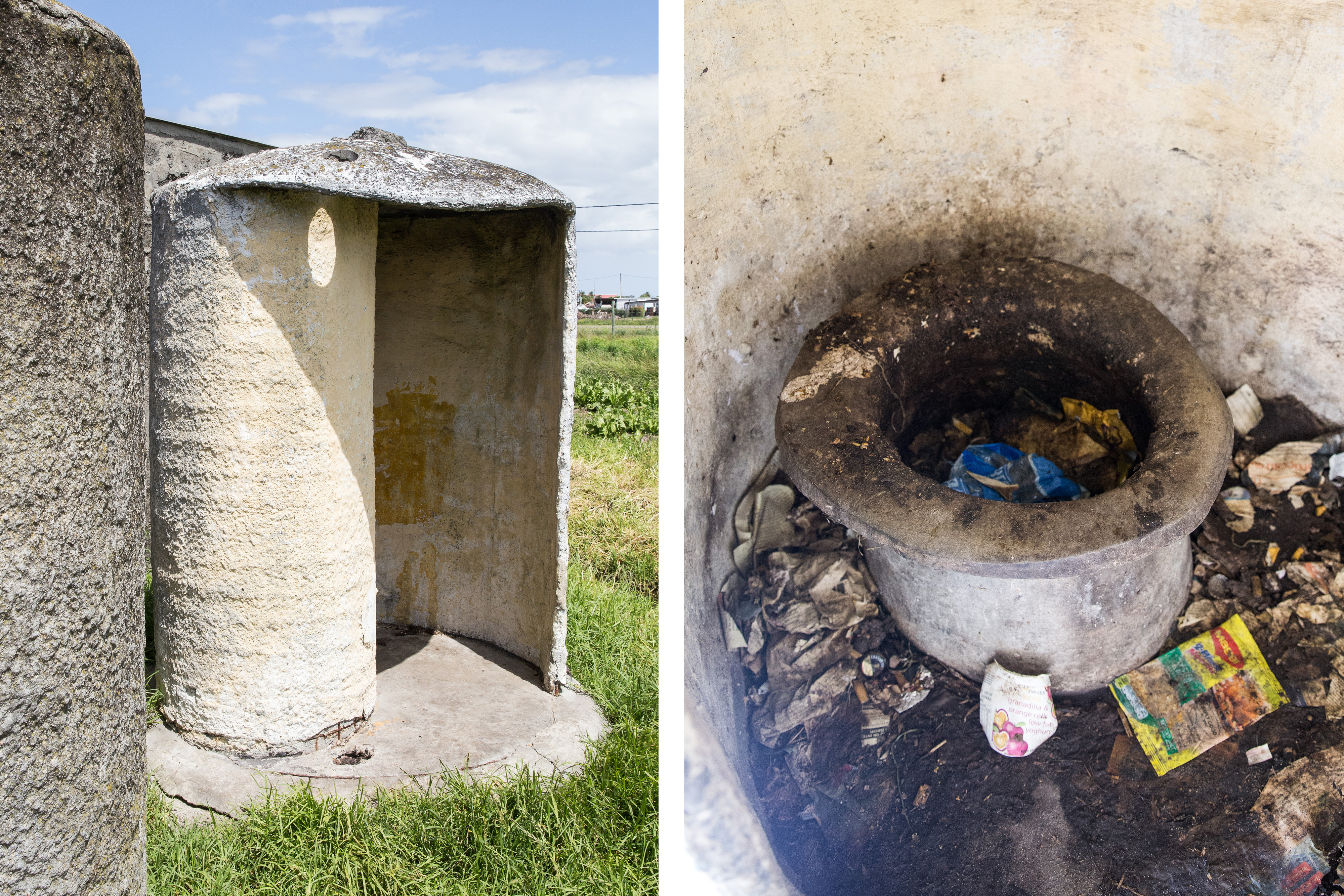 Residents of the farm say these pit toilets fill up regularly and are dangerous for young children. Photo: Ashraf Hendricks

Arno Bock said that equipment on the farm was often stolen, with the damage to water pumps costing up to R50,000 to repair every time. “We’ve contacted the police to come out a few times but they don’t even come out or say they can’t find the farm,” he said. Arno Bock said he no longer visited the far end of his farm alone because he feared for his safety.

“Our hands are tied and government isn’t helping. They help all of the so-called emerging farmers and then half of those people don’t even farm the land. They get all the equipment which we can’t even afford,” said Bock.

Beula Bock said farmers were “finding it very difficult to farm here. We don’t want to see people on the streets, but we just can’t do anything else. We don’t have the money to build houses for them. Government only seems to help certain people which is also not fair,” she said.

Arno Bock said they were tired of empty promises from the government. “We had to give a list of all the workers needing housing on our farms a few years ago but nothing came of it.” “I’ve been to sit with [current Premier Alan] Winde and other City officials but nothing. They were just making us happy while we were sitting there,” he said.

The Bocks said that the future of the farm was uncertain. They said they supported the proposed rezoning of the horticultural area if it meant their workers would be accommodated in decent housing, which they could not provide for them.

Nazeer Sonday of the PHA campaign is leading the fight against the rezoning in the Cape High Court. He said he was not aware of the conditions on this particular farm but that the issue was “not as simple as it appears”.

“Before, farmers and workers in the area have been working in their own silos and have their own issues. For the first time now, we want to bring everyone together to see how we can improve the area for all. I’m not saying that issues don’t exist, but we will be dealing with those through this forum,” he said.