Court case reveals parties are at an impasse 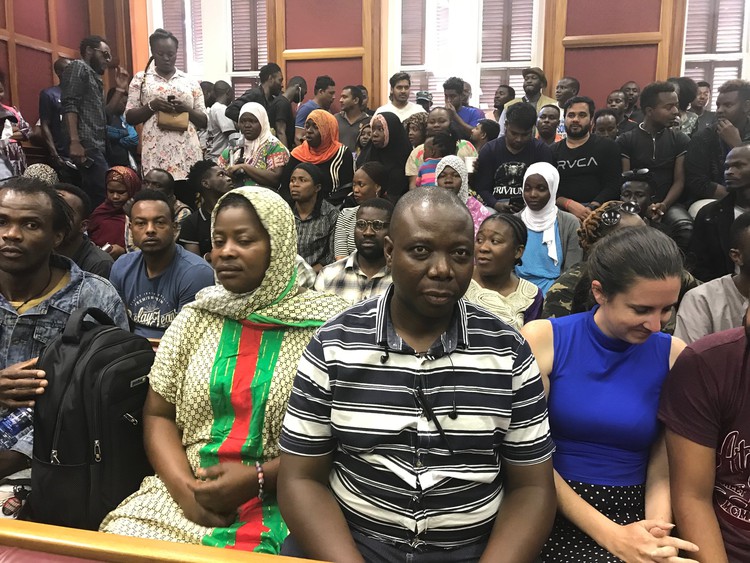 Refugees who have been living at the Central Methodist Mission on Greenmarket Square attended the Cape High Court on Friday. In the middle wearing stripes is their leader Jean-Pierre Balous. Photo: Tariro Washinyira

The Central Methodist Mission on Greenmarket Square has been overflowing with refugees for two months, with hundreds of people who cannot fit into the church living outside on Longmarket Street. And after a court hearing on Friday, the situation will not be resolved until at least 22 January, when the next hearing in this case will be held.

The case is a continuation of an urgent interdict brought by the City of Cape Town on 9 December. The City wants the Cape High Court to order the refugees to stop disregarding health and safety by-laws. The interdict would prevent those seeking refuge at the church from urinating and defecating outside, washing clothes outside, and making fires and cooking outside. The City also wants the refugees to refrain from intimidating, threatening, and harassing its officials.

Judge Kate Savage had postponed the 9 December hearing until Friday, in order to give the City, the Department of Home Affairs and police an opportunity to meet and find a solution. The role of Home Affairs is to verify the refugees’ documentations. The refugees have been protesting for months — previously outside the United Nations High Commissioner for Refugees (UNHCR) office on St Georges Mall, before they were dispersed in a chaotic scene on 30 October. They have been demanding to be resettled in a third country, not in South Africa or their countries of origin (mostly central African countries).

But on Friday the City’s advocate Adiel Nacerodien told the court that the meeting had reached a deadlock.

Nthai presented the court with a preliminary investigation conducted by Home Affairs. He said the number of people occupying the affected area is about 500, 100 of whom have asylum permits that have expired. A further 80 are undocumented and 68 claim to have lost their documents. “There are 265 children between the ages of one month and seventeen years,” Nthai said.

Judge Kate Savage expressed frustration with the failure of the parties to resolve the deadlock.

Greenmarket Square traders, many of whom are themselves asylum seekers, refugees or immigrants, also expressed frustration with the ongoing situation when they wrote to Mayor Dan Plato in mid-November. They are concerned that the protest is causing them to lose business.

“For six weeks now there has been a protest by a fraction of the refugee and asylum seeking community in Cape Town. Many of their grievances are valid and many of our own traders suffer the same injustices particularly from the Department of Home Affairs. We have enormous sympathy for the most vulnerable people among the protestors,” their letter stated. But the traders said that the central demand of the protest leaders, to be resettled to a third country as a group is “misguided and unrealistic”.

Jean-Pierre Balous, the leader of the refugees, represented them on Friday. He told the court that the group had not committed any crime and was not intimidating tourists. “They even come inside the church, talk to refugees and take pictures,” he said. “We even stopped robbers who wanted to rob tourists twice and the police are aware of what we have done.”

He blamed the City for the fact that people are cooking and urinating outside the church. “They are the ones who instructed the people in the area not to give water or allow refugees to use their toilets,” he said.